Verifying sources is why we tend to approve fewer posts than other groups similar to ours. Being precise outweighs the need to give the news at all costs and to be precise it is necessary to verify the news as far as possible.

Taiwan News is an English-language news site and former Taiwanese newspaper founded, under a different name, in 1949. The current publisher is a food company called I-Mei Foods. When news comes from a Taiwanese media, it should be remembered that it was Taiwan that came into sharp contrast with the WHO and the Chinese Communist Party at the beginning of the pandemic, given that they were the first to warn WHO of the outbreak of a ' epidemic in China recognizing doubts about the Chinese actions and the coverage of the WHO itself. It should also be remembered that China, or rather the Chinese Communist Party, which is one of the first donors of the WHO, has waged a bitter internal war on the UN agency to keep Taiwan out of the WHO precisely because of Taiwan's accusations on the outbreak of the Covid-19 pandemic.

After this preamble, here's the news:

AIPEI (Taiwan News) - A video taken a few days before the coronavirus pandemic starts shows a current World Health Organization (WHO) inspector discussing modified coronavirus testing on human cells and humanized mice at the Wuhan Institute of Virology ( WIV), just weeks before the first cases of COVID-19 were announced in the same city of Wuhan.

In a video that was originally recorded on December 9, 2019, three weeks before the Wuhan Municipal Health Commission announced an outbreak of a new form of pneumonia, virologist Vincent Racaniello interviewed British zoologist and EcoHealth Alliance chair Peter Daszak about the his work at the nonprofit to protect the world from the emergence of new diseases and predict pandemics. Since 2014, Daszak's organization has received millions of dollars in funding from the U.S. National Institutes of Health (NIH), which it channeled to WIV to carry out research on bat coronaviruses.

In the first phase of the research, which took place from 2014 to 2019, Daszak coordinated with Shi Zhengli, (石正麗), also known as "Bat Woman", at WIV to investigate and catalog bat coronaviruses across China. EcoHealth Alliance received $ 3,7 million in funding from the NIH for this research, and 10% was channeled to WIV, he reported. NPR.

The second, more dangerous phase, which began in 2019, involved gain-of-function (GoF) research on coronaviruses and chimeras in humanized mice from the University of North Carolina's Ralph S. Baric laboratory. Funding for the program was withdrawn from the NIH under the Trump administration on April 27 amid the pandemic.

At 28:10 minute of the interview, Daszak says that the researchers found that SARS likely originated in bats and then searched for other SARS-related coronaviruses, eventually finding over 100 of them. He noted that some coronaviruses they can "enter human cells in the laboratory" and others can cause SARS disease in "humanized mouse models".

He ominously warned that such coronaviruses are "not treatable with therapeutic monoclonals [antibodies] and cannot be vaccinated against them with a vaccine." Ironically, he claims his team's goal was to try to find the next "relapse event" that could cause the next pandemic, just weeks before COVID-19 cases began to be reported in Wuhan.

When Racaniello asks what can be done to tackle coronaviruses, given that there is no vaccine or therapy for them, Daszak at 29:54 seems to reveal that the goal of the GoF experiments was to develop a pan-coronavirus vaccine for many different types of coronaviruses.

Based on his response, it is evident that just before the pandemic began, WIV was modifying coronaviruses in the laboratory. "You can manipulate them in the laboratory quite easily". What he later mentioned became the telltale trait of SARS-CoV-2, its spike protein: "The spike protein drives much of what happens with the coronavirus, the zoonotic risk".

Daszak mentions WIV's collaboration with Baric: "and we work with Ralph Baric at UNC [University of North Carolina] to do this." As has been suggested by supporters that SARS-CoV-2 is a laboratory chimera, he talks about inserting the spike protein "in a backbone of another virus" and then do "some lab work".

Providing evidence of the creation of chimeras for the sake of a vaccine, he says, "Now, the logical progression for vaccines is, if you are going to develop a SARS vaccine, people will use pandemic SARS, but let's try to include these other ones. related diseases and getting a better vaccine. "

Based on Daszak's statements, it appears that shortly before the pandemic began, WIV was using GoF experiments with chimeras in an attempt to create a vaccine. These experiments appear to have included the infection of mice genetically change to express the human ACE2 protein with these chimeras.

In a presentation Entitled "Assessing Coronavirus Threats," delivered four years before the 2015 pandemic, Daszak points out that experiments involving humanized mice have the highest degree of risk. Demonstrating his close ties to WIV, he also listed the lab as a collaborator at the end of the presentation. 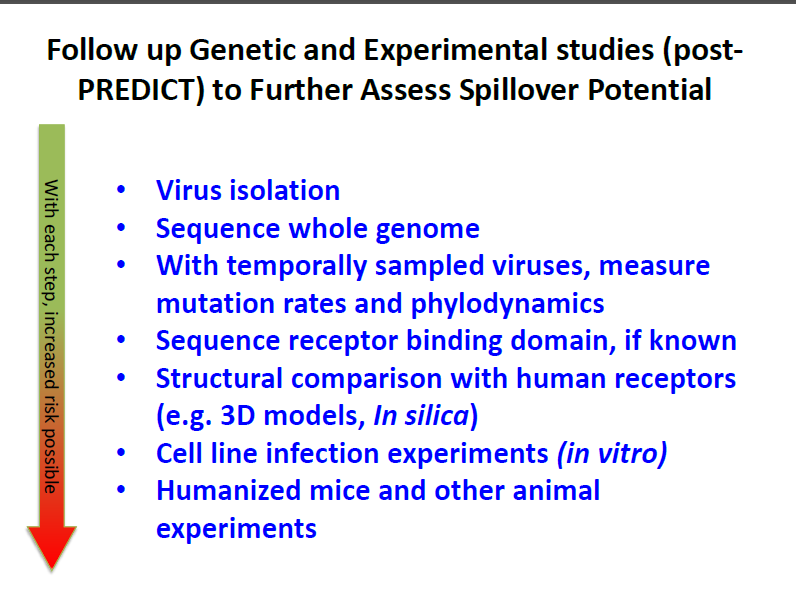 Controversially, Daszak was included in a WHO team of experts that was finally cleared by Beijing to investigate the origin of the COVID-19 outbreak, more than a year after it began. Scientists like Richard Ebright, a molecular biologist at Rutgers University in New Jersey, are condemning Daszak's participation due to conflicts of interest "which unequivocally disqualify him from being part of an investigation into the origins of the Covid-19 pandemic", reports the Daily Mail.

In light of the WHO trip to Wuhan, a researcher carrying the pseudonym of Billy Bostickson and his colleagues at DRASTIC (Decentralized Radical Autonomous Search Team Investigating COVID-19) have created a petition asking the international investigation team to answer 50 key questions about the Wuhan outbreak. Among the questions is a request to access the facility's database and laboratory records, which are expected to be 20 years old and include a look at its security procedures, security audit reports, and security incident reports .