Why is the deputy minister for health Sileri under escort? 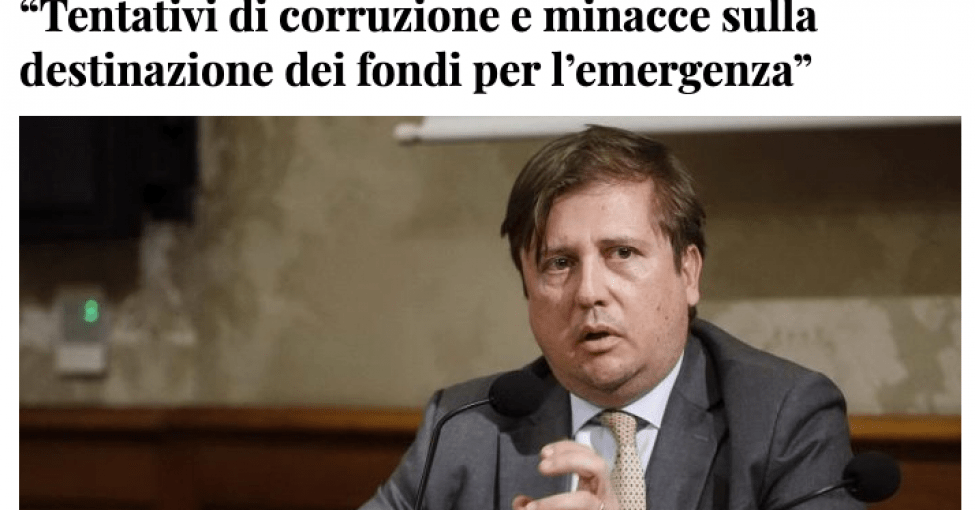 "The deputy minister M5s of Health Pierpaolo Sileri he ended up under escort after denouncing corruption attempts and threats with respect to its political activity and in particular with regard to the allocation of public funds for the coronavirus emergency. The Prosecutor of Rome has opened a file against unknown persons for "serious threats": the deputy minister has already been heard by the magistrates and for about a week he has been accompanied by a public security officer. No official comment from the exponent M5s and his staff: "I once heard a person who said the more you climb to the top and the stronger the wind blows", he limited himself to say in the late afternoon, guest of Radio 1 Rai. "I think it is our duty to give our best and the risks increase".

According to the indiscretions reported by the news agencies, among the people involved in the investigation there is also a senior executive in the healthcare field, with managerial roles between Rome and Calabria. The threats date back to the last period of the coronavirus emergency and have been going on for weeks. "

News confirmed by several colleagues, for example Vito Crimi, deputy minister of the interior, who tweeted "My most sincere solidarity and closeness to the deputy minister of health Pierpaolo Sileri, forced to move under escort after threats received on the destination of funds for the Covid emergency 19. Pierpaolo, and with him the whole 5 Star Movement, are not intimidated. Go on like this".

But just the next day, on the same site, another article appears, of a completely different opinion and tenor: the article entitled "Fontana, Azzolina, Sileri under escort: politics has little to do with anything. There is something more worrying" tells us another version, claiming that the three political figures ended up under escort for different reasons, namely: "attacks by organized groups of professional haters who work to poison the social climate. "

But how, the day before there was an ongoing corruption attempt, complete with an open file in the prosecutor's office, and the next day instead of magically the "senior manager in the health field" who would be involved and the corruption attempts related to destination of public funds no longer talk? By the way, this news seems to have received little echo from the mass media. Why? It may seem, to a cynical eye, that the arrival of the escort for other political figures and for other reasons has, so to speak, "obscured" the story concerning Sileri and which recalls motivations quite different from "social tensions".
Still in the same cynical eye, the doubt may also arise that this thing risks making people feel comfortable, who, of corruption in the healthcare system, does not want to hear about it. Least of hypothetical attempts to "condition" public funds .... in full emergency.
Now the real threats are social tensions, the real problems are the dissatisfied people who threaten via the web (according to some "chased" by political movements that blow on social unease). By highlighting the threats via the web received by Azzolina and Fontana, however, attempts at corruption, retaliation, serious threats connected to public funds are no longer mentioned. Look'.
It will be that we live in Italy and we have been used to hearing about corruption too often, it will always be that the more confused and tense the situation the easier it becomes to distract attention, in the end we are no longer scandalized at all and above all, it becomes almost automatic to hide the dust under the carpet and pull straight.
However, on issues like these, citizenship would have the right to know more. Deputy Minister Sileri should perhaps inform citizens more about the pressures he received, at least which specific sectors of health care would have involved, because if this emergency affects us all and the measures taken to manage it are having negative results on the whole Italian population both economically and socially, citizens have the right to greater transparency and any offenses should be publicly condemned and disclosed, even more so those involving the public sector.
We just have to wait, in the absence of further "indiscretions", the outcome of the investigations of the Prosecutor. In the meantime, we hope that the bribe attempt denounced by the deputy minister will not end in oblivion of the media centrifuge of these months.