Vaccine failure: the macroscopic problem that officials are ignoring 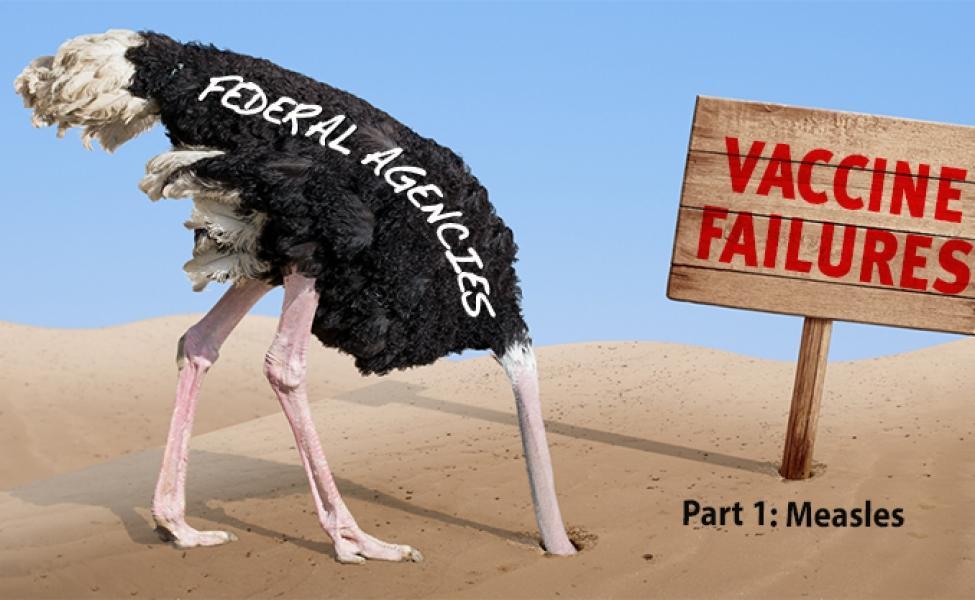 From the Children's Health Defense Team [Note: This is the first in a series of articles that will examine the serious problem of vaccine failure, a problem that, scandalously, remains unrecognized by public health officials and politicians promoting obligations. of draconian vaccines.]

The coordinated and intensified effort to eliminate vaccine exemptions and impose new vaccine obligations was, without doubt, one of the most important stories of 2019, both nationally and internationally. One of the primary weapons in the arsenal was themeasles hysteria, collected and pumped by partisan media, willing to use false talking points to demonize the unvaccinated, ignoring or flying over previous failures of measles vaccination. In preparing for an intense advertising campaign for measles in 2020, Children's Health Defense believes it is important to continue to draw attention to the real facts of the mass measles vaccination failures. "

It is far from uncommon for vaccines, including those against measles-mumps-rubella (MMR) and MMR-plus-chicken pox (MMRV) used in the United States, to fail to deliver on their stated promises. As of 2019, in fact, the main vaccine experts have admitted that "the capacity of the current measles vaccine to support long-term protective immunity and adequate flock immunity, in environments without exposure to type virus wild "is"still subject to debate".

As a first consideration, between the 2% and 12% of children who receive their first measles vaccine have a "primary vaccine failure", defined as non-reactivity to the vaccine. For largely unknown reasons, this subset of children (and even adults) do not develop the expected antibody response after an initial vaccine or booster, compared to those with immunity derived from exposure to wild-type measles virus. "

Secondary vaccine insufficiency (waning immunity) is also a typical feature of measles vaccines (and others as well), with the effectiveness of the vaccine recognized as "inferior and non-permanent compared to wild virus immunity." show that the level of antibodies progressively decreases with increasing time from vaccination. Additionally, additional boosters do not solve the problem. In a CDC study of 18-28 year olds who received a third MMR booster dose, protection ran out in less than a year, a fact that forced the study authors to discuss a routine third dose.

Vaccine failure apparently received some attention in the 1970s and 1980s, but since 1990 the topic has been abandoned by most researchers and remains sadly insufficiently investigated. Some vaccine experts - amazed at the "surprisingly high number of vaccine failures among recipients of one and two doses of measles vaccine" - are calling for long-term monitoring of vaccine-induced immunity after the first and second doses, as well as more detailed data on vaccine efficacy, immunogenicity and epidemiology of measles.

Bankruptcy n. 2: mothers vaccinated against measles are not passing on adequate immunity to their newborns, who represent the age group most vulnerable to measles.

Studies have confirmed that maternal antibodies produced by measles vaccination (as opposed to the permanent immunity provided by natural measles infection) are unable to provide children with adequate maternal protection in the first year of life. As a result, a significant percentage of those who take measles concern newborn babies. As early as 1999, vaccine experts already knew that vaccination was increasing the measles vulnerability of newborns in the United States. A study published that year in Pediatrics, entitled "Greater susceptibility to measles in infants in the United States", reported that babies born to vaccinated mothers had an almost three-fold "rate of attack against measles" than babies born to non-mothers. vaccinated - 33% versus 12%.

In the first four months of 2019, when about 70% of measles cases in the U.S. for the year had already been reported, a quarter of cases involved infants under the age of 15 months. An analysis of measles cases in the United States from 2001 to 2008 also found that 24% were under the age of 15 months, and a CDC study of measles cases from 2001 to 2015 found that the incidence per million of population “was higher in infants aged 6 to 11 months. . and children aged between 12 and 15 months. "As the defense of children's health has often noted, infants are at greater risk of complications and death related to measles than elementary school children over the age of five (the age group that has had mainly and without accidents measles in the pre-vaccine era)

Vaccine insufficiency and waning immunity open the door to measles in vaccinated individuals, particularly vaccinated adults, another group at greater risk of complications from measles.

Official measles data are almost certainly underestimating the extent of measles in vaccinated people. This is because measles vaccination sometimes "modulates" the clinical presentation of measles, generating a different picture of symptoms. The California measles case study 2000-2015 found that people who received two or more doses of the measles vaccine were often "less sick" than their single dose or unvaccinated counterparts; It is important, however, that they were still able to pass on measles and "required the same amount of public health effort to track contacts." In 2009, two US doctors who had been fully vaccinated with MMR doses took measles but "continued to see patients because neither of them believed they could have measles." A 1990 study of measles, serum confirmed to be "modified by vaccine, found that approximately 16% of vaccinated patients did not meet the CDC clinical definition of measles or had no detectable measles M (IgM) specific immunoglobulins. A weak or absent IgM response makes it more difficult to diagnose and confirm measles in the laboratory The researchers concluded that these factors may lead to "underestimation of measles cases and ... overestimation of vaccine efficacy in highly vaccinated populations."

"In 2015, the sequencing of 194 measles cases in the United States showed that nearly two out of five cases (38%) were the result of the vaccine strain rather than the wild-type measles virus.

Bankruptcy n. 4: vaccinated people take measles from the vaccine and pass the vaccine strain on to others.

Recent research by the CDC indicates that measles cases in individuals who have primary vaccine failure "could be as transmissible as measles cases in unvaccinated individuals." In addition, modern typing techniques are showing that it is the measles vaccine strain that is causing measles in a considerable proportion of cases, both in vaccinated individuals and in people with whom the vaccinated come into contact. The CDC knew of the potential viral shedding of measles vaccinates since at least the 90s, when vaccine strain measles damaged and killed a 21-year-old college student. In 2015, the sequencing of 194 measles cases in the United States showed that nearly two out of five cases (38%) were the result of the vaccine strain rather than the wild-type measles virus.

In a 2016 study published in the Journal of Clinical Microbiology, the CDC and other researchers clarified the importance, during epidemic investigations, of differentiating wild-type measles from vaccine-type measles (which they called "vaccine reactions against measles "). In 2019, however, the CDC sequenced only a third of measles cases. This lack of complete information on measles strains in all cases not only contributes to the underestimation of measles disease among vaccinated individuals, but can lead to "unnecessary public health interventions". New York officials who banned public spaces from unvaccinated children last year and imposed full-postcode measles vaccine requirements remained silent on the issue of vaccine strain measles.

Although vaccine experts hate to admit that vaccinated individuals may be carriers of measles transmission to others, sparse studies show that this is the case. In addition, recent CDC research reported in JAMA Pediatrics indicates that primary cases of measles in vaccinated subjects are as likely to infect other vaccinated subjects as they spread measles to unvaccinated subjects. In 2011, New York City public health officials reported five measles cases, each of which "had preliminary measles immunity evidence", both from two doses of the measles vaccine and a positive measles titer. . What the researchers found particularly noteworthy was the fact that that patient "has shown that he is able to pass the disease on to other individuals" despite having received two doses of MMR and despite similar immunity in the other four cases.

In late 2019, Japanese researchers reported the transmission of measles from an individual vaccinated twice to three unvaccinated people; the transmission chain then continued to six other people, all fully vaccinated. (Japan banned the MMR vaccine in 1993 and instead uses a combined measles-rubella vaccine.) Without specifying how to achieve this goal, the researchers concluded that "To prevent the transmission and outbreak of the measles, particularly in countries in to whom measles has been nearly eliminated, patients with [secondary vaccine failure] for measles should be carefully monitored. " The CDC researchers, writing also at the end of 2019, agree on the fact of "guaranteeing continuous monitoring of measles among vaccinated people".

Bankruptcy n. 5: vaccination failures are not limited to measles vaccines: failure is inherent in all vaccines.

Scientists have known about the failure of vaccines for years. In 2006, Canadian researchers admitted that "the immunity offered by [imperfect] vaccines is not complete and could fade over time, leading to resurgence and epidemics despite high levels of primary vaccination." Summarizing the riddle that addresses the vaccination schedules, Canadian researchers noted that, on the one hand, "if the vaccine only provides temporary immunity, the infection cannot typically be eliminated by a single vaccination", but on the other hand, "have a recall program does not necessarily guarantee disease control "

Public health agencies and officials continue to circumvent this decidedly consequential information, preferring instead to accuse citizens of measles and propagate effectively ineffective vaccines to justify a greater withdrawal of exemptions. However, a vaccination program that increases serious risks in the most vulnerable individuals, produces outbreaks and transmits vaccine disease strains to vaccinated and unvaccinated alike, cannot be considered a success.