The price of vaccines is growing: the obligation affects spending and is controversial 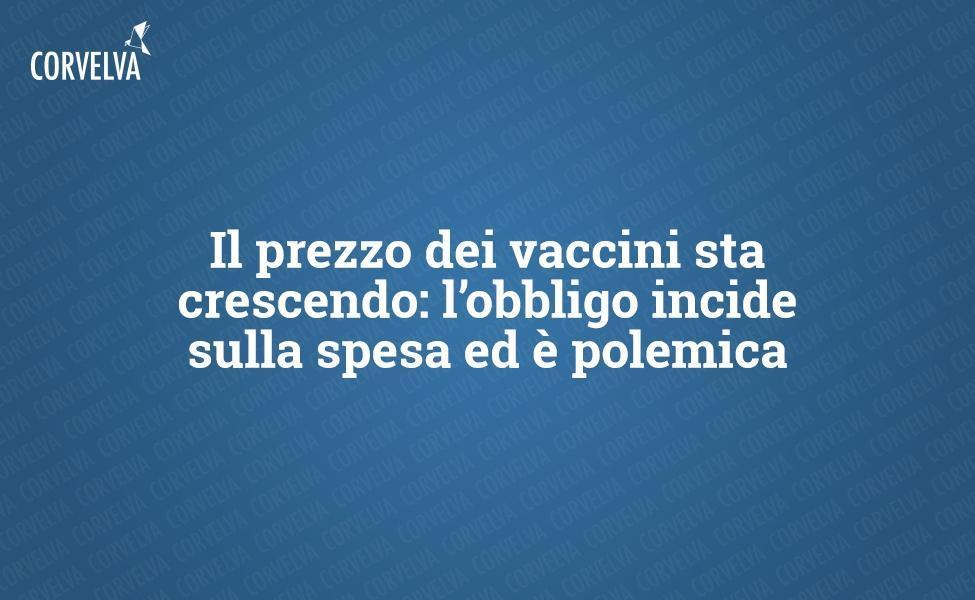 The vaccination requirement introduced by the Lorenzin decree has led to an overall increase in public spending.

To reveal this increase which amounts to 36%, is the Osmed report widely distributed in AIFA (Italian Medicines Agency). Data in hand it went from 358 million euros in 2016 spent on vaccines paid by the National Health System, to the 487,4 million registered in 2017. An increase also foreseeable if we consider that at 10 mandatory vaccinations introduced by the provision, there are also 4 others that it is strongly recommended to perform.

According to the data indicated by Aifa, between 2016 and 2017, the overall expenditure on vaccines increased by 130 million euros, but to determine the increase is the price of the single dose which went from € 14,02 to € 22,74 on average. There is therefore talk of about € 8 more per dose, a figure that if multiplied by the number of vaccinated (increasing due to the obligation), reveals a deal at zero. To earn this 62% more they are the multinationals of the drug, but it is the State, or the citizens themselves, who pay.

By virtue of this, it is to be considered that a change in the supply of vaccines, also causes economic repercussions on public expenditure. In this case, it is easy to imagine how the obligation to vaccinate can only have an important impact, also arousing attention from politics. And this is what happened on October 15, 2015 in the Senate, when a request was made for details on the expected costs for the purchase of vaccines in view of the "significant expansion of the vaccine offer defined at national level".

The newspaper "La Verità" went to the bottom and through the data and figures provided by AIFA it was able to find that this substantial increase in prices affected mainly the mandatory vaccinations such as measles (+14,2 million euros) and meningococcics (+84,1 million euros), but in general it affects all types.

Which are the five pharmaceutical companies that have recorded the highest turnover? GlaxoSmithKline is the one that most of all has seen an increase in the volume of drugs purchased in 2017 (compared to 2016), for a total of 97,4 million euros approximately. Pfizer follows which recorded a +19,249 million euros, Merck with a +8.850 million euros, Sanofi Pasteur with a +4.768 million euros and Seqirus with a +3.781 million euros.