The First National Commemoration in Gruaro 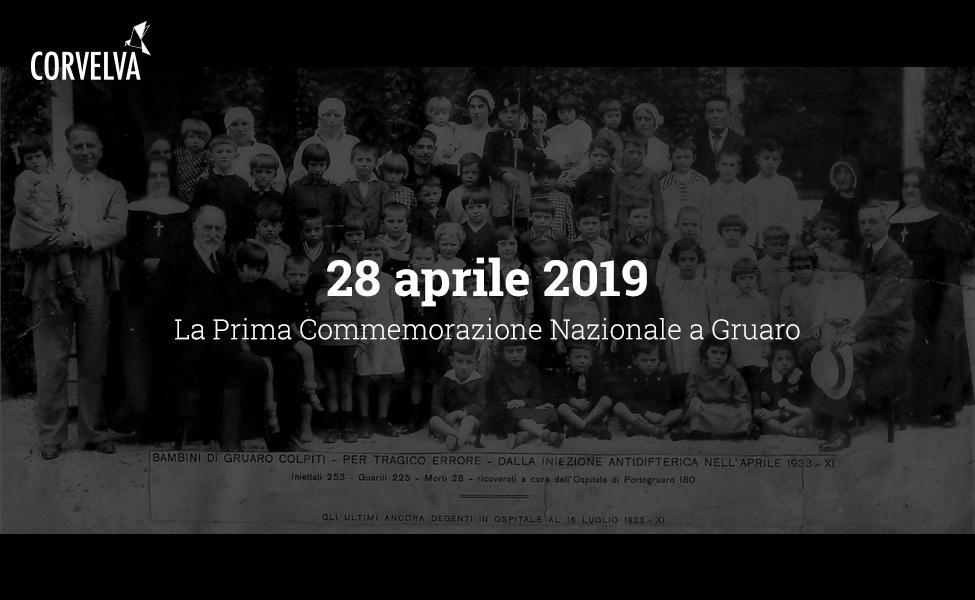 Corvelva is pleased to inform you that it will participate and support this precious event with not only the symbolic but physical presence of President Ferdinando Donolato.

on behalf of all parents fighting for freedom of choice, We invite you Sunday 28 April 2019 at 10 am to the First National Commemoration in Gruaro.

The commemoration was organized and organized by the parents of the area, in memory of the "Massacre of Gruaro" where in 1933, due to the experimentation of the antidipteric vaccine, 28 children died and there were an unknown number of victims.

We look forward to seeing you there, thanks for your cooperation

Massacre of Gruaro in '33, children who died after the vaccine

In 1933 the children of Gruaro were sacrificed on the altar of knowledge: human guinea pigs to which not even a plaque has been dedicated ". About eighty years have passed since the days of that tragedy, but those who lived it do not forget it at all. Adamo Gasparotto, 85 years old and a lucid mind, has decided to report his testimony to the media on what among the experts of local history is known as "The Massacre of Gruaro". Resident for years in Spinea after touring Italy with various excavation firms, Gasparotto is one of two direct witnesses still alive. He chose to retrace this yearning story by thread and sign so that it will not be forgotten, because we all know what happened to the innocent children of Gruaro in the fascist era.

The history is also documented by some historical research published in recent years. In March 1933 the fascist authorities of the time chose the Municipality of Gruaro to test a new vaccine against diphtheria, a dangerous infectious disease.. The town doctor was against and Gruaro was skeptical, but that vaccine had to be tested on the field. And that's that. The parish priests were invited to inform the population of the goodness and reliability of this experimentation, e 253 children were summoned to the municipal surgery. Then comes the terrible part of the harvest, the one traced by scholars and told by Gasparotto to the Gazzettino.

“The sting was done to 253 children and 28 died in the following days. Almost silent. When we got home we all felt bad - said the elderly man reporting the testimonies of the adults of the time -. We fell on the ground, and eating we risked suffocating. Everyone was crying, they had to hospitalize us in Portogruaro, where the hospital was full and makeshift wards were organized. We were all terrified, every now and then some children died. " Gasparotto and his three-year-old sister managed, in the following years the parents were told what had happened. It seems that in a laboratory in Naples a container of serum was not boiled and therefore the vials that ended up in Gruaro contained live vaccine, a lethal substance. “Given what was happening, the authorities went up to Gruaro to make every trace of that vaccine disappear. They passed from family to family to collect all the empty boxes, "explained Gasparotto himself.

The same version of the facts is also reported in the historical research on the diocese of Concordia published by the historian Gianni Strasiotto and in the book "Gruaro, Twenty Centuries of History" by Ariego Rizzetto, from which the photograph we publish is taken. The vaccine was given to children from thirteen months to eight years, the deaths occurred due to paralysis but there is no judicial investigation launched to ascertain responsibilities. Now Gasparotto asks only one thing: a plaque to remember those victims. “A plaque would be enough. In those tombs there is not a word that explains how and why those creatures died ”. For this reason he made himself heard also with the municipal administration.

It is right to remember these innocents: