Madagascar: 1200 measles deaths in a few months? WHO knows nothing ... 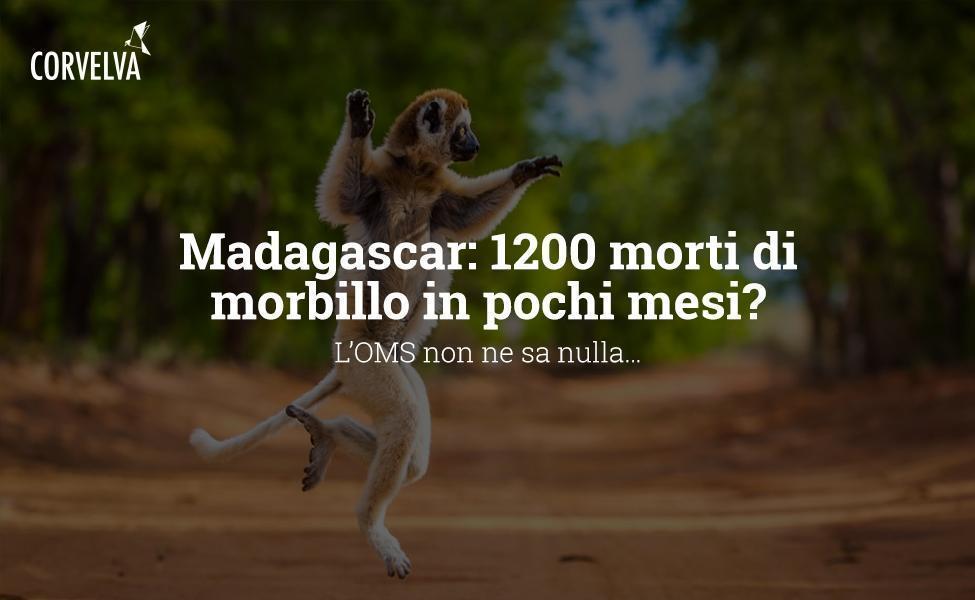 Yesterday, April 14, Ansa came out with a news-bomb immediately picked up and relaunched by the main online newspapers. (1) According to reporters, Madagascar would face a terrible measles epidemic (the new plague of the century, as we all know - ah, in Madagascar there is still the plague in fact, but this does not seem to be news) would have caused as many as 1.205 deaths in a few months!

The "main" site from which to draw official news on emergencies and epidemics around the globe is naturally that of the WHO (World Health Organization): it is a pity that there is no mention of African emergencies linked to measles, nor of worrying epidemics ... Looking good, really good, is the latest note published on Madagascar: it is from January 2019 and mentions 39 deaths related to this "terrible" disease (2). no reference to the very different figure of 1200 deaths ... The same official note was also taken up by our Italian Ministry of Health (3). Among other things, as we can read in the circular, “Over half of the cases (51%) reported during the current epidemic have not been vaccinated or their immune status is not known (they will become 56% in March, ed). Madagascar has the highest rate of malnutrition in children under 5 (47%) in the African region, which may increase children's risk of serious complications and death from measles infection. " So, we have a whopping 49% of people who have been vaccinated but still contract the disease ??? And, therefore, the hygienic, health and nutritional conditions have a significant weight in the course of this disease ??? Incredible, when we say it we are four ignorant possessed and addicted to witchcraft…. Luckily here we can have a "scientific" confirmation: the Ministry and the WHO say so, science will certainly not object!
Sifting through the emergencies reported in the African continent, among other things, there are news on ebola, cholera, and others, but not a single alarm on our local killer. And this despite the conditions of the aforementioned population! (4)

In short, what happened? How come if the situation is so serious, the most recent note we find on the WHO website talks about 39 deaths in January and there are no other updates?

The only link that reports the data of 1.205 deaths, correlating it to the measles epidemic, is this (5) and I quote: The current epidemic underscores the necessity of vigilance. The measles epidemic that was declared on 4 October 2018 has affected 105 of the country's 114 health districts. Nearly 117 075 cases and 1 205 deaths have been recorded to date.
How come the main Who (Oms) website does not show this data clearly? Here is the table extracted from the WHO website (6), containing the latest report with an update in March:

First thing, under "Confirmed cases", we find 0. Zero! Then he says in the comments: "There were 638 reported deaths in health facilities and 567 community deaths including 114 measles-related deaths and 453 non-measles realated death assessed by community workers." Whose translation would be "there have been (since September 3, 2018 as of March 24, 2019) 638 deaths reported in healthcare facilities and 567 deaths in the community, including 114 measles related deaths and 453 non measles related deaths valued by community workers. ”?
So would measles deaths be 752 instead of 1205? and where does this data come from? Maybe from the sum of the two dead figures reported? 638 + 567 = ... 1.205!
But then it is possible that someone has "wrong" to report the data? The mystery deepens ... but how many deaths are certainly related to measles, if we do not even have really confirmed cases here? The reported figure of 752 deaths remains, almost half of what the media reported in the past few hours.

We hope not to be faced with yet another fake news about vaccines and diseases preventable with them? (a bit like the non-existent 270 measles deaths in London that ex-minister Lorenzin had declared on TV?)

Speaking of prevention, do you know What is the WHO advising to run for cover? Vitamin A (7) ... known remedy for many accused of witchcraft ...
"Administration of Vitamin A, specifically in a context of high rates of malnutrition, can reduce illness and deaths from measles infection"

We await any developments ...