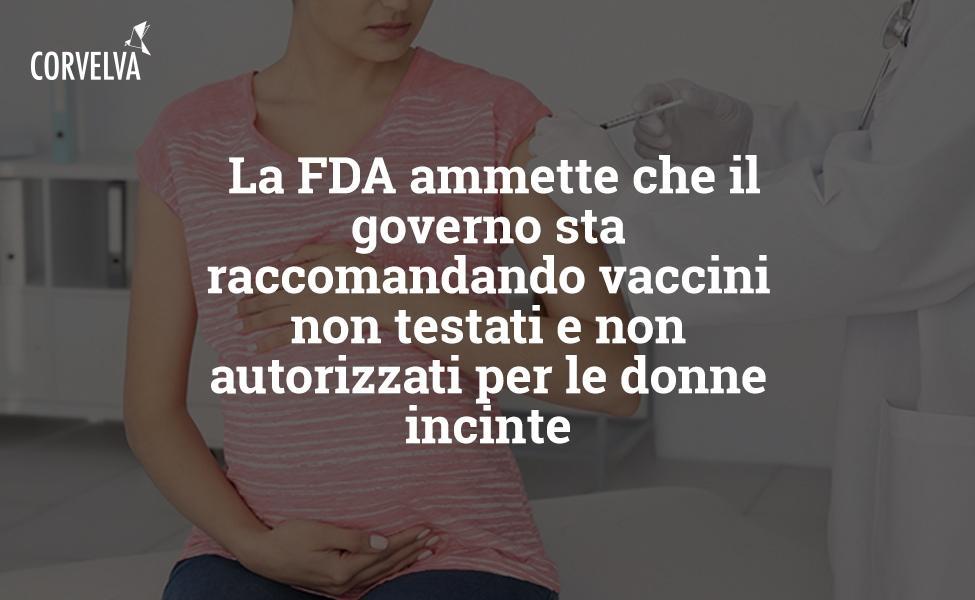 Robert F. Kennedy, Jr. states, "As a nation, we can no longer pretend that our trusted agencies are protecting our children. It is time to hold federal agencies accountable. "

WASHINGTON, DC, February 11, 2019 - In response to a Freedom of Information Act (FOIA) lawsuit, the FDA has ammesso, for the first time, that government agencies, including the CDC, recommend vaccines for pregnant women without their having been licensed for pregnant women by the FDA itself, nor tests for safety in clinical trials. The lawsuit, filed by the lawyer Children's Health Defense (CHD), Robert F. Kennedy, Jr. on behalf of Informed Consent Action Network (ICAN), a vaccine safety advocacy group, sought all clinical trial data used by the FDA to approve flu shots in pregnant women. The FDA's concise answer:

"We have no recordings that respond to your requests"

Vaccine manufacturers flu e DTPa they warn against their use for pregnant women as their safety has never been established. The leaflets indicate that "it is not known"if vaccines" will harm an unborn child "and that" there are " insufficient data on use in pregnant women to inform about the risks associated with the vaccine. FDA regulations strictly prohibit pharmaceutical companies from marketing products for "off label" uses. Non-compliant companies are regularly prosecuted under criminal and civil law, paying billion in lawsuits.

However, the CDC has actively recommended vaccination against influenza during each trimester of pregnancy since 2004 and advised pregnant women to receive DTPa vaccination (for tetanus, diphtheria and whooping cough) from 2011. The FDA is responsible for vaccine safety and licensing, but, in the judicial documents just released, he admits that he has no safety data to support the CDC's "off label" pregnancy recommendations. The FDA website says who has never formally approved any vaccines "specifically for use during pregnancy to protect the baby".

Recommendations for vaccination during pregnancy are a dangerous proposition due to the ability of the vaccination to activate one maternal immune response which can damage the brain of the developing fetus, just like infections during pregnancy sometimes. In 2008, neuroscientist Paul Patterson warned:

"Even if it happened less than 1% of the time, vaccination of an entire population of pregnant women could affect thousands of children"

Long-term safety studies were not designed to detect vaccine-related fetal lesions, but a 2017 Kaiser study of over 45.000 women (published on JAMA Pediatrics) showed a high risk of birth defects and an increased risk of autism in children of mothers who received a first trimester flu shot. After the authors applied a statistical correction that mitigated the significant association, renowned UCLA statistician Sander Greenland criticized the decision methodologically. "inappropriate", noting that pharmaceutical researchers use the technique when they don't like a result and" want to see if they can get rid of it "

CDC data show that women who received some flu shots from 2010 to 2012 had a 7,7 times greater risk of abortion compared to women who have not received such vaccines. CDC published the study on Vaccine, but he omitted these results from his press release, letting pregnant women ignore the true risks of vaccines. CHD President Robert F. Kennedy, Jr. notes that most flu shots given to pregnant women still contain mercury-based thimerosal. Thimerosal is recognized by Proposition 65 in California as a toxic to reproduction and exposure during pregnancy it can cause learning and behavioral problems. The DTPa contains aluminum, which the FDA regulates as a toxin in the parenteral nutrition but not in vaccines.