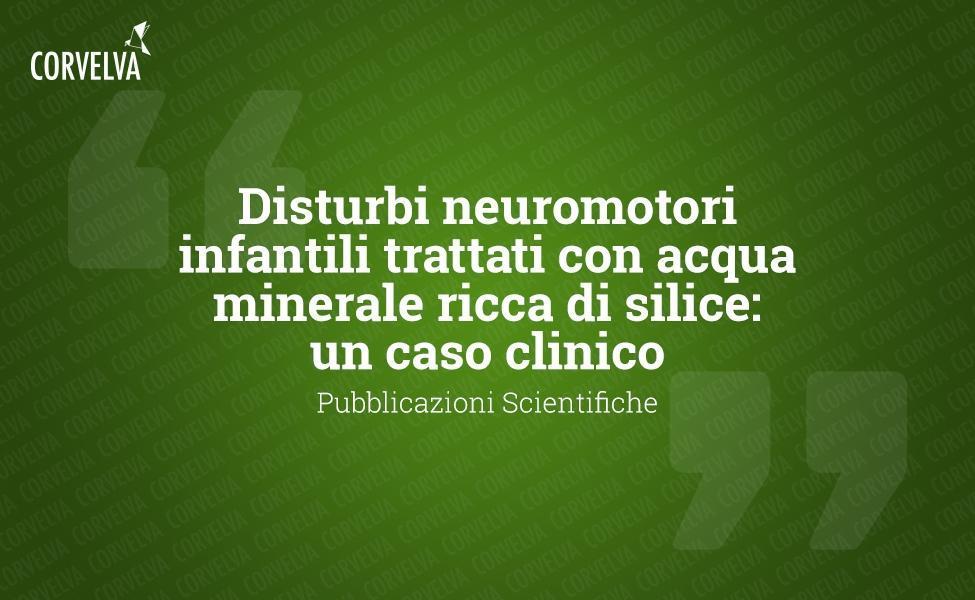 Previous work has shown the benefits of drinking silica-rich mineral water from patients diagnosed with specific neurological diseases. The suggested mechanism is that silica-rich water facilitates the removal of aluminum from the body and nervous system. This report describes the case of a child with a mix of neurological and motor symptoms that have greatly diminished by drinking silica-rich water for less than a year. These improvements also show a correlation with the EEG results. A discussion of the potential sources of aluminum to which the child has been exposed is also included.

A previously healthy male child, between three or four years of age, began to exhibit the following symptoms: repeated movement of the head left and right as if to say "no", pain in the legs for no apparent reason, chronic cough during sleep without symptoms of cold or gastroesophageal reflux disease. These symptoms were not of sufficient concern to report to doctors.

When the baby has reached 52 months of age, new, other serious symptoms appear including episodes of involuntary movements of the whole body and absence seizures that included not responding to words and appearing confused or clouded. Each of these episodes typically lasted less than a minute.

The boy was taken to the emergency room of a university pediatric hospital in Switzerland. The family had videotaped the movements and these were shown to the doctors.

Involuntary movements of the whole body were of two types: one type was walking in a repetitive way, while making abnormal movements of hands, arms, feet. The other type happened when the baby was in bed or on a similar flat surface. In this type, the movement started from a kneeling or elbow position, then the child suddenly pushed himself with his legs making a small horizontal jump and often hitting the obstacles in front of him with his head.

After the appearance of more severe symptoms, these symptoms were observed and recorded more carefully in a notebook. The following three additional anomalies were observed:

The last two symptoms observed when the baby was awake appear similar to absence seizures. During a 24-hour period the child had an average of about seven involuntary episodes on the whole body and a greater number of episodes with the other anomalies. In the following months the boy was able to explain that during these episodes, his arms or legs moved on his own and he did not like this; on the contrary, he liked to shake his head left and right. When he had a strange smiling expression, he denied that he was smiling. During the maximum period of symptoms (age 52 and 53 months) the child showed an increase in tiredness and problems of loss of balance when walking, running, playing, in the moments in which he apparently did not have the episodes previously described. Episodes were rare when the boy was focused on a task he liked.

A 40-minute video-EEG (video-electroencephalogram) was made 3 days after the visit to the emergency room and revealed an epileptiform profile (pointed waves in the left back of the brain).

The initial report from the neurology department described them as focal epilepsy. Five days later, an 18-hour video-EEG was made. The relationships of these two EEGs were in agreement. However, subsequent analyzes of the video recordings made during the EEGs showed that spike wave events did not correspond to any abnormal body movement. At this point the hypothesis of focal epilepsy has been discarded. Magnetic resonance imaging (MRI) did not show any abnormalities. Tests and direct cultures of swabs of blood, urine, throat were performed in order to investigate a hypothesis of PANDAS. The tests revealed no signs of infection (including streptococcal groups A, C, G) and showed no abnormalities with anti-NMDA receptors. Child neurologists from three different hospitals saw the child and the test results. They all agreed that the child had one or more neurological disorders and evaluated various diseases including epilepsy, PANDAS, complex tics, stereotyped movements, but did not confirm any of these diagnoses.

A change in diet was introduced, replacing all possible tap water with silica-rich mineral water, based on positive results with this type of mineral water on various neurological diseases. 1,2 The mineral waters used for this case were first the commercially available Carrefour brand Eau d'Auvergne, now no longer available, and the second Volvic, both with a content of 32 mg / L of silica (SiO2).

Family members administered as much silicon-rich water as possible, however when the child was in kindergarten

or at school (about 9 hours a day, on normal school days) he continued to drink tap water. The child has maintained this water intake pattern to date. When the child started drinking silica-rich mineral water, he also stopped drinking baby formulas and started a more varied diet. After two months of these dietary changes, the baby's symptoms began to decline. After eight months of this new diet, involuntary movements of the whole body were reduced from the initial value of about 50 per week to about 5 per week (Fig. 1). A similar reduction has been observed for other symptoms, including chronic cough and the frequency of absence seizures.

Fig. 1: Evolution over time of aluminum excretions and episodes of involuntary movements of the whole body. EEG at 52 months of age showed epileptiform abnormalities. The intake of silica-rich water began at 52,5 months. The 64-month EEG showed normal results (no abnormalities).

Several urinalysis tests were performed to measure the amount of excreted aluminum. The results are plotted in the figure. The diagram shows that the aluminum content in the urine has decreased to a level less than the laboratory's detection capacity. This trend follows the decrease in the child's neurological disorders. Another EEG was performed at the age of 64 months and was normal (no abnormalities). The child has never used any neurological drugs and has never made regular use of drugs in general.

For this case, it was not possible to formulate a clear diagnosis based on documented diseases, and this motivated further investigations. Medical literature 4,5 and clinical experience show that it is not uncommon to have neurological disorders that appear in children around 5 years of age, and gradually decrease during adolescence. In this case, the symptoms have been significantly reduced in less than one

year. This relatively rapid evolution suggests that aluminum build-up causes neurodevelopment and that drinking silica-rich water can cure these ailments. Aluminum does not play a useful role in humans and animals and is a known neurotoxic element. 3

This case report shows that aluminum was present in the body and implies that silicon-rich water facilitated the removal of part of it. During this removal process, the child's neuro-disorders, chronic cough and EEG results improved. Another implication is that the chronic cough of this case appears to be of neurological origin, 6 as the other common causes (cold, gastroesophageal reflux disease) did not correspond to the symptoms.

The potential sources of aluminum to which the child had been exposed were examined. Aluminum sources reported in the literature are: tap water, 7   formulas for children, 8 other processed foods, 9  the vaccines. 3,10 Of these potential sources, the tap water from the home in which the child lived has been tested and has shown an aluminum content of 6,8 μg / l, which is within the limit permitted by law and this content excludes the tap water from significant sources of aluminum. The only processed food that he regularly took were children's formulas (Aptimal brand). Mitkus et al.11 they estimated the body load of aluminum during the first 400 days of life for infants with formula-based diets and for a standard vaccination program, and estimates show that the aluminum load from vaccinations exceeds those from food sources. 11 The vaccinations of the child containing aluminum were: Infanrix

NeisVac-C Baxter (1 dose at 500 μg of aluminum per dose). The child was also vaccinated with Priorix (2 doses) but this vaccine does not contain an aluminum adjuvant.

Unlike vaccinations that are 100% bioavailable, it is estimated on average that only 0,2% (0,25 to 0,27 μg) of aluminum is absorbed from the intestine and made bioavailable to a child's body. day by these Aptimal formulas. 12

After four years with these infant formulas, the child has absorbed approximately 390 μg of aluminum, while the total amount of aluminum added to the child's body with vaccinations is estimated to be 2875 μg.

The presented case suggests that aluminum may be a cause of childhood intoxication. In addition, it shows that silica-rich mineral water can be used as a treatment for these cases.

Conflicts of interest: nobody.