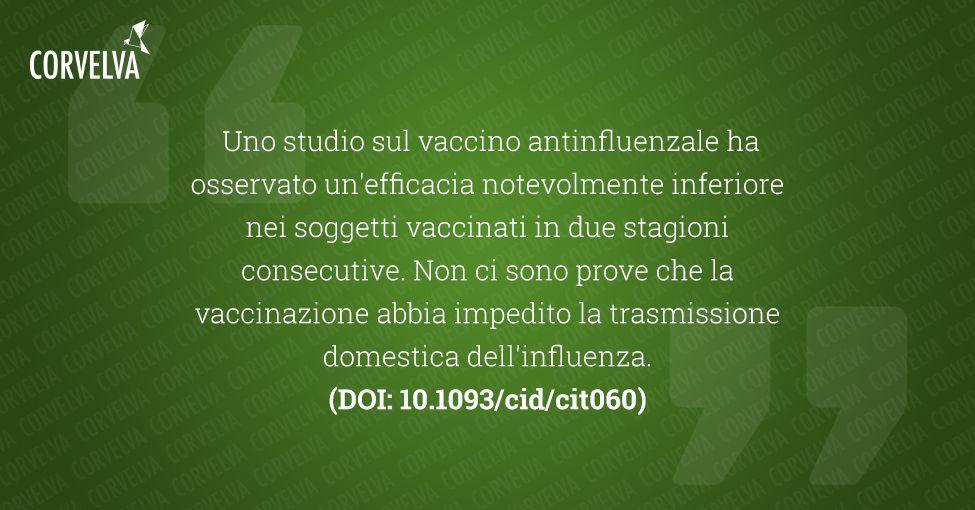 Context: There is a recognized need to determine the efficacy of the flu vaccine on an annual basis and a long history of studying respiratory diseases in families.

Methods: We recruited 328 families with 1441 members, including 839 children, and followed them up during the 2010-2011 flu season. Samples were collected from subjects with reported acute respiratory diseases and tested with real-time reverse transcriptase polymerase chain reaction. Reception of the influenza vaccine was defined based on documented evidence of vaccination in medical records or a vaccination registry. The efficacy of 2010-2011 influenza vaccination in preventing laboratory-confirmed influenza was estimated using Cox-proportional hazard models adjusted for age and high-risk conditions and stratified by previous season's vaccination status (2009-2010).

Risultati: Influenza was identified in 78 (24%) families and 125 (9%) individuals; the risk of infection was 8,5% in the vaccinated and 8,9% in the unvaccinated (P = .83). The corrected efficacy of the vaccine in preventing community-acquired influenza was 31% (95% confidence interval [CI], -7% to 55%). In subjects vaccinated without any previous season vaccination evidence, significant protection (62% [95% CI, 17% -82%]) against community-acquired influenza was demonstrated. Significantly lower efficacy was observed among vaccinated subjects in both the current and previous season. There is no evidence that vaccination prevented domestic transmission once the flu was introduced; adults were particularly at risk despite vaccination.

Conclusions: Estimates of vaccine efficacy were lower than those demonstrated in other observational studies conducted in the same season. Unexpected results of lower efficacy with repeated vaccinations and no protection given home exposure require further study.