Are the US flu death figures more PR than science? 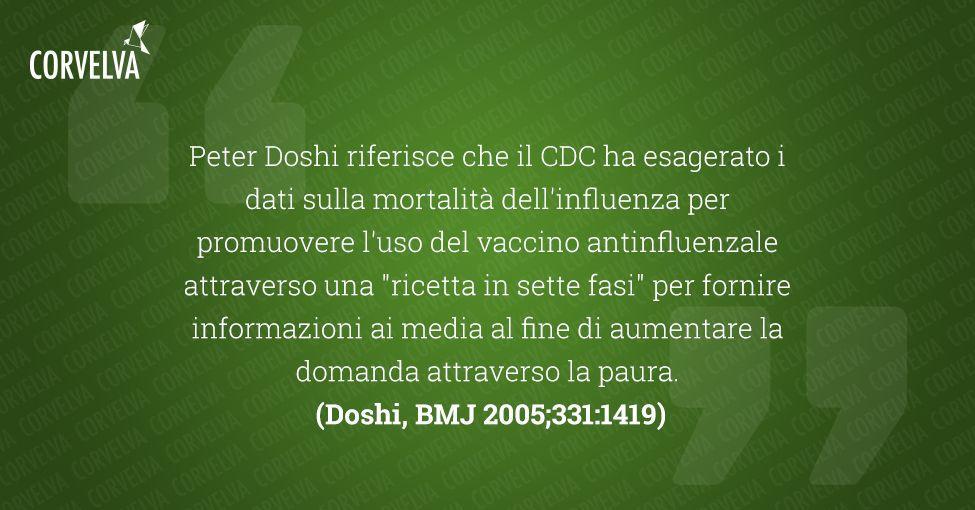 The US data on flu deaths is a mess. The Centers for Disease Control and Prevention (CDC) recognizes a difference between death from the flu and death associated with influenza, but uses the terms interchangeably. Furthermore, there are significant statistical incompatibilities between official estimates and national vital statistics. Added to these problems is a fear marketing strategy, a CDC communications strategy in which medical experts "predict disastrous results" during flu seasons.

The CDC website states what has become commonly accepted and widely reported in the secular and scientific press: each year "about 36 [Americans] die of the flu" (www.cdc.gov/flu/about/disease.htm) and "influenza / pneumonia" is the seventh leading cause of death in the United States (www.cdc.gov/nchs/fastats/lcod.htm). But why are influenza and pneumonia linked together? Is the relationship so strong or unique that it can be characterized as a single cause of death?

David Rosenthal, director of health services at Harvard University, said: "People don't necessarily die, per se, from the [flu] virus, viraemia. What they die of is secondary pneumonia. Many of them die. of these pneumonia are not viral pneumonia, but secondary pneumonia ". But Dr. Rosenthal agreed that the influenza / pneumonia relationship was not unique. For example, a recent study (JAMA 2004; 292: 1955-60 [PubMed] [Google Scholar]) found that gastric acid-suppressing drugs are associated with a higher risk of community-acquired pneumonia, but such drugs and pneumonia are not compiled as a single statistic.

Meanwhile, according to the CDC's National Center for Health Statistics (NCHS), "influenza and pneumonia" resulted in 62 deaths in 034-2001 61 of which were attributed to pneumonia and 777 to influenza alone, and in 257 cases the influenza virus was positively identified. Between 18 and 1979, NCHS data shows an average of 2002 deaths from influenza per year (1348 to 257).

The NCHS data would be compatible with the CDC mortality estimates if about half of the deaths classified by the NCHS as pneumonia were actually secondary pneumonias initiated by influenza. But the NCHS criteria indicate otherwise: "Cause of death statistics are based solely on the underlying cause of death ... defined by WHO as" the disease or injury that initiated the train of events leading directly to death."

In a written statement, CDC media relations responded to several statistics: "Usually, influenza causes death when infection leads to serious medical complications." And like most of these cases "they have never been tested for virus infection ... CDC considers these figures [NCHS] to be a very substantial sub-context of the actual number of deaths from influenza. Therefore, the CDC uses indirect modeling methods to estimate the number of deaths associated with influenza ".

William Thompson of the CDC's National Immunization Program (NIP), and lead author of the CDC's 2003 JAMA article, explained that "influenza-associated mortality" is "a statistical association between deaths and available viral data." He said an association doesn't imply an underlying cause of death: "Based on the modeling, we think it's associated. I don't know if we'd say it's the underlying cause of death."

Yet this stance is inconsistent with the CDC's claim that the flu kills 36.000 people a year - a misrepresentation that has yet to be publicly corrected.

Prior to 2003, the CDC claimed there were 20.000 flu-associated deaths each year. The new figure of 36 people reported in the JAMA document of January 000 is an estimate of the mortality associated with influenza during the 2003s. Keiji Fukuda, a flu researcher and co-author of the paper, was cited as one of two possible causes of this 90% increase: "One is that the number of people over the age of 80 is growing more and more. . The second possible reason is the type of virus that predominated in the 65s [was more virulent] ".

However, the 65+ population only grew 12% between 1990 and 2000. And if the flu virus had truly been more virulent in the 90s, more deaths would be expected. But NCHS-reported influenza deaths averaged 30% fewer in the XNUMXs than in the XNUMXs.

If it passes, the 2005 Flu Protection Act will renew the US flu vaccine policy. The legislation will require the CDC to pay manufacturers for unsold vaccines "through routine market mechanisms." The bill will also require the CDC to conduct a "public awareness campaign" emphasizing "the safety and benefits of recommended vaccines for the public good."

Yet this law obscures the fact that the CDC is already working in the interest of manufacturers by campaigning to increase flu vaccination. At the "National Influenza Vaccine Summit 2004," co-sponsored by CDC and the American Medical Association, Glen Nowak, associate director of communications at the NIP, spoke about the use of the media to increase vaccine demand. A step of a "Seven-step recipe to generate interest and demand for the flu (or any other) vaccination" occurs when "medical experts and public health authorities publicly ... declare concern and alarm (and predict disastrous results) - and urge the flu vaccination "(www.ama-assn.org/ama1/pub/upload/mm/36/2004_flu_nowak.pdf). Another step is to "keep reporting ... that the flu is causing serious illness and / or affecting many people, helping to promote the perception that many people are susceptible to a bad case of the flu."

Prior to the summit, demand had been low at the start of the 2003 flu season. "At that point, manufacturers were telling us they weren't getting many orders for vaccines to use in November or even December," Dr Nowak reminded the team. National Public Radio. "It really felt like we had to do something to encourage people to get the flu shot."

If flu isn't actually a major cause of death, this public relations approach is certainly over the top. Furthermore, by arbitrarily linking influenza with pneumonia, the current data is statistically skewed. Until they are corrected and until unbiased statistics are developed, the possibilities for solid discussion and public health policy are limited.