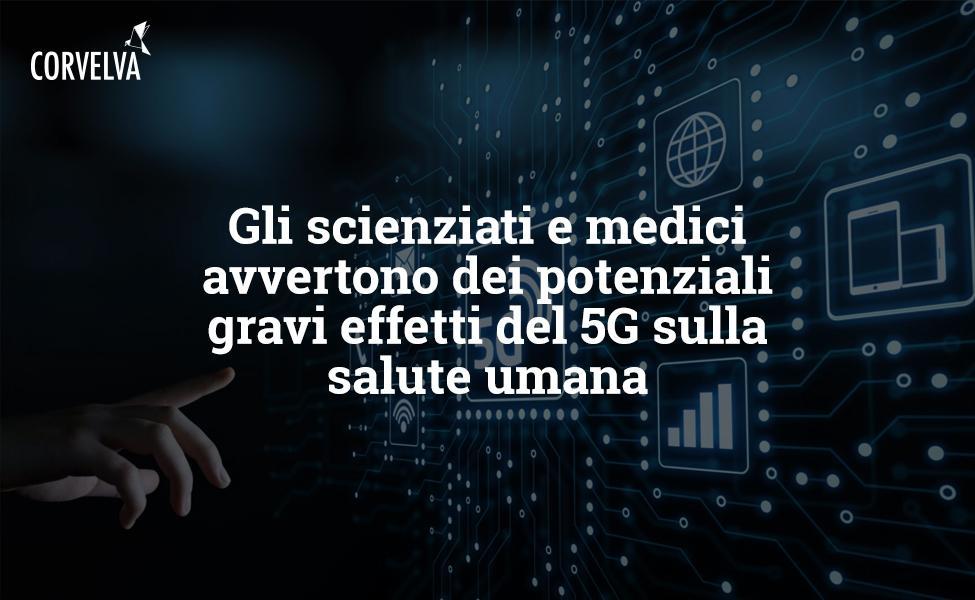 Therefore, the appeal launched in 2017 by 170 independent scientists, whose first signatories have been Rainer nyberg, EdD, emeritus error of the Åbo Akademi in Finland, e Lennart Hardell, lecturer at the Department of Oncology of the Orebro Medical School in Sweden. Then followed the signatures of dozens and dozens of scientists. The appeal continues to ask the European Union institutions to block the development of 5G technology pending health risks to be ascertained for European citizens. And it does so with the full support of the association FRIEND, L 'Association for Chronic and / or Environmental Poisoning Diseases that has been fighting on this front for years.

«Many new antennas will be needed with a large-scale implementation which in practice will result in an installation of antennas every 10-12 houses in urban areas, thus massively increasing theexposure of the population to electromagnetic fields - say the scientists - With "the increasingly intensive use of wireless technologies" nobody will be able to avoid being exposed because, in the face of the increase in transmitters of 5G technology (inside homes, shops and in hospitals) there will be , according to estimates, "10 to 20 billion connections" (refrigerators, washing machines, surveillance cameras, self-guided cars and buses, etc.) which will be part of the so-called Internet of Things. All this may cause an exponential increase in the total long-term exposure of all European citizens to radio frequency electromagnetic fields ».

Here is the rest of the appeal:

We, the undersigned, more than 180 scientists and doctors from 37 countries, propose a moratorium on the roll-out of the fifth generation - the 5G - of telecommunications, until the potential dangers to human health and the environment have been fully investigated. by industry independent scientists. 5G technology will significantly increase exposure to radio frequency electromagnetic fields (RF-EMF) compared to 2G, 3G, 4G, Wi-Fi, etc. already existing. RF-EMF have been shown to be harmful to humans and the environment.

5G leads to a massive increase in exposure to wireless radiation

5G technology is effective only at short distances. It is poorly transmitted through solid material. Many new antennas will be needed and large-scale implementation will result in antennas every 10-12 homes in urban areas, thereby massively increasing mandatory exposure.

With "the ever wider use of wireless technologies", no one can avoid being exposed. Because beyond the increased number of 5G transmitters (even inside homes, shops and in hospitals) it is estimated that "10 to 20 billion connections" (refrigerators, washing machines, surveillance cameras, cars and buses, etc.) .) will be part of the so-called "Internet of Things". All of this certainly leads to a significant increase in the overall long-term exposure of RF-EMF to all EU citizens.

The harmful effects of RF-EMF exposure have already been demonstrated

Over 230 scientists from over 40 countries they expressed their "serious concerns" regarding the omnipresent and increasing exposure to EMF generated by electrical and wireless devices even before the further 5G roll-out. They refer to the fact that "numerous recent scientific publications have shown that EMF affects living organisms at levels well below the majority of international and national guidelines". Effects include increased cancer risk, cellular stress, increased harmful free radicals, genetic damage, structural and functional changes in the reproductive system, learning and memory deficits, neurological disorders and impacts. negative effects on the general well-being of humans. The damage goes far beyond the human race, since there is growing evidence of harmful effects both for the plants that for the animals.

After the scientists' appeal that was written in 2015, further research has confirmed with conviction the serious health risks of RF-EMF fields from wireless technology. The world's largest study (US $ 25 million) from National Toxicology Program (NTP) shows a statistically significant increase in the incidence of brain and heart cancer in animals exposed to EMF, below the exposure values ​​of the ICNIRP (International Commission for the Protection from Non-Ionizing Radiation) guideline followed by most countries . These findings support results from human epidemiological studies on RF radiation and brain tumor risk. A large number of scientific reports reviewed on a scientific level demonstrate damage to human health from EMF.

The World Health Organization (WHO) cancer research facility, the International Agency for Research on Cancer (IARC), in 2011 concluded that EMF of frequencies from 30 KHz to 300 GHz are possible carcinogenic to humans (Group 2B). However, new studies such as the NTP study mentioned above and several epidemiological investigations including the latest studies on cell phone use and brain cancer risks confirm that RF-EMF radiation is carcinogenic to humans.

La EUROPE GUIDE LINE EM-EMF 2016 states that "there is strong evidence that long-term exposure to certain levels of EMF is a risk factor for diseases such as certain cancers, Alzheimer's disease and male infertility ... The common symptoms of EHS (electromagnetic hypersensitivity) include of head, difficulty concentrating, sleep problems, depression, lack of energy, tiredness and flu symptoms ".

A growing part of the European population is affected by disease symptoms related to exposure for many years to EMF and wireless radiation as reported by the scientific literature. There international scientific declaration on EHS and multiple chemical sensitivity (MCS), Brussels 2015, declares that: "Taking into account our scientific knowledge, we invite all national and international bodies and institutions ... to recognize EHS and MCS as true pathologies that act as sentinel diseases and that could create greater concern for the public health in the years to come all over the world, that is, in all countries that freely use wireless technologies based on the electromagnetic field and marketed chemicals ... Inaction is a cost to society and is no longer an option ... we unanimously recognize this serious danger to public health ... that the main primary prevention measures are adopted and privileged to face this global perspective of pan-epidemic ".

Il precautionary principle (UNESCO) was adopted by the EU in 2005: "When human activities can lead to morally unacceptable harm, which is scientifically plausible but uncertain, action will have to be taken to avoid or decrease that harm."

Resolution 1815 (Council of Europe, 2011): "Take all reasonable measures to reduce exposure to electromagnetic fields, in particular to radio frequencies of mobile phones and in particular to exposure to children and young people who appear to be most at risk for head tumors ... The Assembly strongly recommends applying the ALARA principle (as low as reasonably achievable) which covers both the so-called thermal effects and the athermic [non-thermal] or biological effects of electromagnetic emissions or radiation "and "improve the risk and quality assessment standards".

L'European Environment Agency (EEA) launched a 'warning' for "the risk of radiation from everyday devices" even when the radiation both under WHO / ICNIRP standards. EEA concludes: "There are many examples of non-use of the precautionary principle, which have caused serious and often irreversible damage to health and the environment ... harmful exposures can be spread before there is" convincing "evidence of damage from long-term exposure is biological understanding how it is caused. "

The current ICNIRP security guidelines are out of date. All the evidence of damage mentioned above occurs even if the radiation is below the ICNIRP "safety guidelines". Therefore, new safety standards are needed. The reason for having misleading guidelines is the "conflict of interest" of ICNIRP members because of their relationships with telecommunications or electricity companies that would undermine the impartiality that should govern the regulation of public exposure standards for non-ionizing radiation ... To assess the risks of cancer it is necessary to involve scientists with expertise in medicine, in particular oncology, independent ".

The current ICNIRP / WHO guidelines for EMF are based on the obsolete hypothesis that "the critical effect of RF-EMF exposure for human health and safety is the heating the exposed fabric".

However, scientists have shown that different types of diseases and damage is caused without heating ("non-thermal effect") at radiation levels well below the ICNIRP guidelines.

We invite the EU:

We expect a response from you, by and no later than 31 October 2017, to the two collections of signatures on what measures we intend to take to protect the inhabitants of the European Union against RF-EMF and in particular 5G radiation. This appeal and your response will be publicly available.