Mobile phone repeaters, the Ramazzini Institute communicates the results of its study 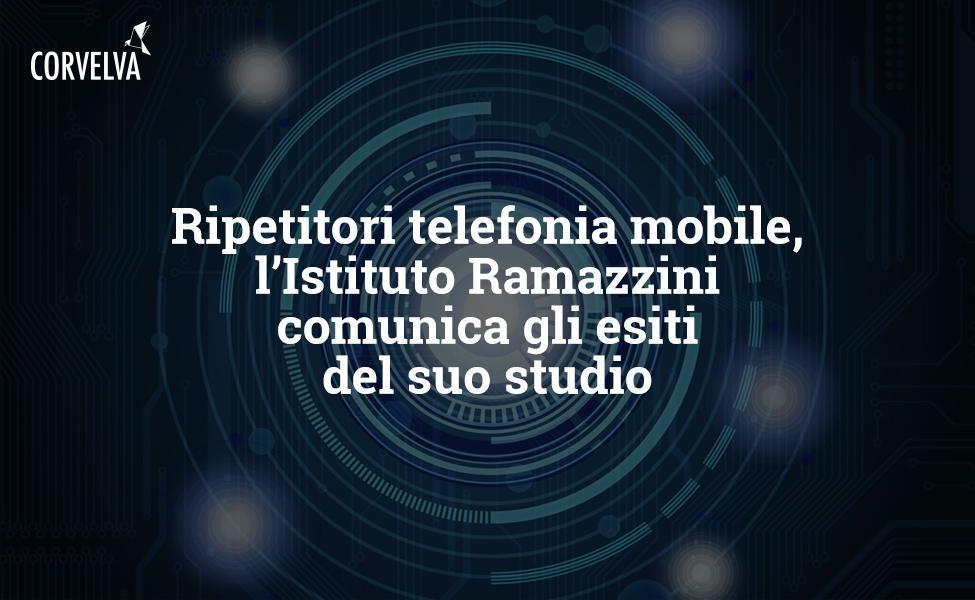 The research that the Ramazzini Institute of Bologna, through the "Cesare Maltoni" Cancer Research Center, conducted to study the impact of human exposure to the levels of radiofrequency radiation (RFR) produced by repeaters and transmitters has been completed. for mobile telephony. The research was funded by the members and members of the Ramazzini Institute, by Arpa, the Emilia-Romagna Region, the Carisbo Foundation, Inail, Industrial Processing Protection (PEI), the Monte di Bologna and Ravenna Foundation, Children With Cancer (UK), Environmental Health Trust (USA). The research team of the Ramazzini Institute has just published the results of the study, the largest ever conducted on radio frequency radiation (RFR), entitled "Report of the final results concerning brain and heart tumors in Sprague-Dawley rats exposed by the prenatal life to spontaneous death at radiofrequency electromagnetic fields, equivalent to the environmental emissions of a 1.8 GHz repeater ": the paper is available online from 22 March 2018 in the international peer-reviewed journal Environmental Research, edited by Elsevier.

In published research, the Ramazzini Institute studied radio frequency exposures a thousand times lower than those used in the National Toxicologic Program (USA) study on cell phones, and found the same types of cancer.

Researchers at the Ramazzini Institute found statistically significant increases in the incidence of malignant schwannomas, rare tumors of the heart's nerve cells, in male rats in the group exposed to the highest field intensity, 50 V / m. Furthermore, Italian scholars have identified an increase in the incidence of other lesions, already found in the NTP study: Schwann cell hyperplasia in both male and female rats and malignant gliomas (brain tumors) in female rats at the dose higher. All exposure levels used in this study are below the US FCC limit for the maximum exposure allowed for the population. In other words, if a repeater emits this amount of radiation, it is considered compliant with all U.S. regulations and legislation. In Ramazzini's study, 2.448 Sprague-Dawley rats were exposed to 1.8 GHz GSM radiation (those of mobile phone antennas) for 19 hours a day, from prenatal life (i.e. during the pregnancy of their mothers) until spontaneous death. The study includes environmental doses (i.e. similar to those found in our living and working environment) of 5, 25 and 50 V / m: these levels have been designed to mimic human full-body exposure generated by repeaters, and they are much lower than those used in the study of the American NTP.

"The intensity of the emissions used for the study is of the order of magnitude of that of the most common environmental exposures in Italy," says Dr. Fiorella Belpoggi, Director of the Research Area of ​​the Ramazzini Institute and leader of the study. In fact, the DPCM 8/07/03 sets the limits as follows: 1) the exposure limits, differentiated for three frequency intervals; for example, for the frequencies of mobile telephony devices, the exposure limits are equal to 20 V / m for the electric field; 2) the attention value of 6 V / m for the electric field, to be applied for exposures in places where people stay for more than 4 hours a day; 3) the quality target of 6 V / m for the electric field, to be applied outdoors in areas and places that are intensely popular. However, these values ​​are measured as an average over 24 hours, i.e. by averaging the daytime and nighttime measurements, thus leading to an underestimation of the real exposures during the day, when the telephone traffic is higher.

The NTP doses have been established to mimic the localized exposure on body tissues coming from a cell phone placed near the body, and are therefore decidedly higher than those of the Ramazzini Institute. Despite these differences, both studies found statistically significant increases in the development of the same type of very rare malignancies of the heart in treated male rats and brain in females. “Our study confirms and reinforces the results of the American National Toxicologic Program; the observation of an increase in the same type of tumors, however rare, thousands of kilometers away, in rats of the same strain treated with the same radio frequencies cannot in fact be due to chance. Based on common results, we believe that the International Agency for Research on Cancer (IARC) should review the classification of radio frequencies, hitherto considered possible carcinogens, to define them as probable carcinogens. ".

"It is very important to underline the fact that epidemiological studies (ie population studies) have found the same type of Schwann cell tumors (nerve lining cells) in heavy cell phone users," says Dr. Belpoggi. "Although the evidence is that of a low-power carcinogen - he continues - the number of exposed is billions of people, and therefore it is a huge public health problem, since many thousands could be people susceptible to damage biologicals from radio frequencies ". “Furthermore - continues Belpoggi - our data reinforce the request to adopt basic precautions at a global level. Simple measures on the devices, such as a spring earphone built into the phone, or danger signals both in the instructions and in the purchase package so that the device is kept away from the body, and other technological measures that I cannot imagine but which companies surely they know and can put in place, they could constitute a first urgent measure to run for cover. Of course I don't imagine that we can go back

Public health needs timely action to reduce exposure, companies must devise better technologies, invest in training and research, focus on a safety approach rather than radio signal strength, quality and efficiency. We are responsible to the new generations and we must ensure that cell phones and wireless technology do not become the next tobacco or the next asbestos, that is, risks that have been known and ignored for decades ”, concludes Belpoggi.