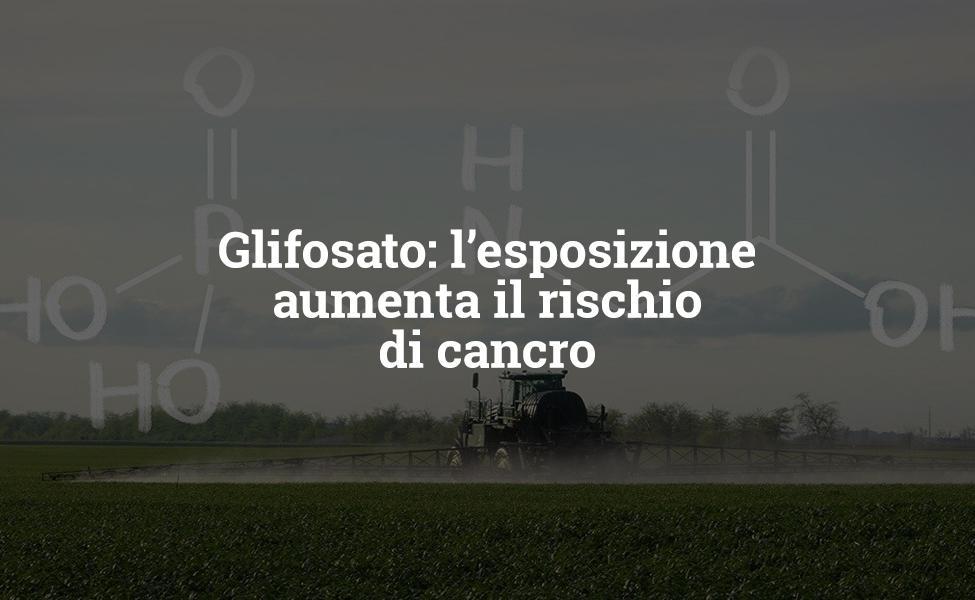 A new study (meta-analysis) on human exposure to glyphosate, the most common herbicide substance in the world, indicates a 41% increase in the risk of developing cancer in the lymphatic system, confirming the doubts expressed in January by the EU Parliament on the controversial issue of "non-carcinogenicity" of the substance.

The exposure to the glyphosate, a widespread broad-spectrum herbicide used worldwide, increases the risk of developing the by 41% non-Hodgkin lymphoma (NHL), a tumor that develops in the lymphatic system, that is, in the cells and tissues responsible for fighting infections and other forms of aggression on the body and ensuring the correct circulation of fluids in the body.

In recent years, there has been a controversy over the carcinogenic risks of glyphosate between regional, national and international health agencies.

In 2015, the World Health Organization (WHO) International Agency for Research on Cancer (IARC) stated that the glyphosate " it is probably carcinogenic to humans".
However, two years later, the U.S. Environmental Protection Agency (EPA) and the European Food Safety Authority (EFSA) both stated that glyphosate "it is probably not carcinogenic to humans".

In the same year, the Bayer who in the meantime was acquiring Monsanto, a multinational agricultural biotechnology company producing Roundup, the most widespread herbicide in the world based on glyphosate, a molecule discovered by Monsanto in the 70s, claimed that this herbicide was "a safe and efficient weed control tool".

In In Europe, the debate was particularly heated, also following allegations made against EFSA that it did not conduct an objective assessment during the EU product trade authorization review process, but that it accepted most of the considerations put forward by Monsanto.

Meanwhile, theEuropean citizens' initiative "Prohibit glyphosate and protect people and the environment from toxic pesticides"Launched in the spring, it had reached the requirement of over one million signatures in a record time of 5 months, showing the great social concern towards pesticides.

So much so that in December 2017, the EU Commission that had to decide on the renewal of the authorization, given the impossibility in the European Council to reach a majority position on the divisions between the Member States, proposed to limit it to 5 years, instead of the usual 15 , also taking into account the citizens' initiative, the non-binding resolution of the European Parliament calling for a ban on the marketing of glyphosate in 2022, as well as the fact that "additional information on this substance is published at a high rate".

On January 16, 2019, the European Parliament gave the go-ahead to the project of the PEST commission, established after the unsatisfactory conclusion on the renewal of the authorization, for make public the studies used in the validation procedure of each individual pesticide, including all data and information supporting authorization applications. In addition, in order to solve the Glyphosate carcinogenicity controversy A systematic review of all relevant studies was requested.

Given these assumptions, the study now published (remember that this is one meta-analysis that is, that data from other studies and research have been put together in order to draw stronger conclusions than those that would have been highlighted on the basis of each individual study), is destined to rekindle controversy.

"All the meta-analyzes conducted to date, including ours, consistently report the same key finding: exposure to GBH [glyphosate based herbicides] it is associated with an increased risk of NHL - he has declared Rachel Shaffer, co-author of the Firm - This research provides the most up-to-date analysis of the correlations between glyphosate and non-Hodgkin lymphoma, including a 2018 study of over 54.000 people. who use authorized pesticides in their work".

The results would also be supported by animal studies showing that mice treated with pure glyphosate have a higher incidence of developing malignant lymphoma.

The researchers point out, however, that further studies are needed to account for the effects of increased exposure from the practice of "drying out" (green burndown) which may not be fully captured in existing studies and examined in this new publication, since glyphosate-based herbicides are only applied to crops shortly before harvest since the 2000s, leading to a significant increase in exposure to this chemical substance.

Monsanto-Bayer defined the analysis as a "statistical manipulation" with "serious method errors", Adding that the study would not provide"valid scientific evidence that contradicts the huge amount of studies showing that the herbicide that contains glyphosate is not carcinogenic".

"It is a stronger case study than previous meta-analyzes conducted, there is more overwhelming evidence of an increased risk of getting cancer due to glyphosate exposure - he has declared Lianne Sheppard co-author and Professor of biostatistics and environmental and occupational health sciences at the University of Seattle - Washington - From the point of view of the health of the population, concerns are high".

Three of the 5 authors of the study were chosen by the US EPA as members of the board of directors for a 2016 Scientific Advisory Group on Glyphosate.