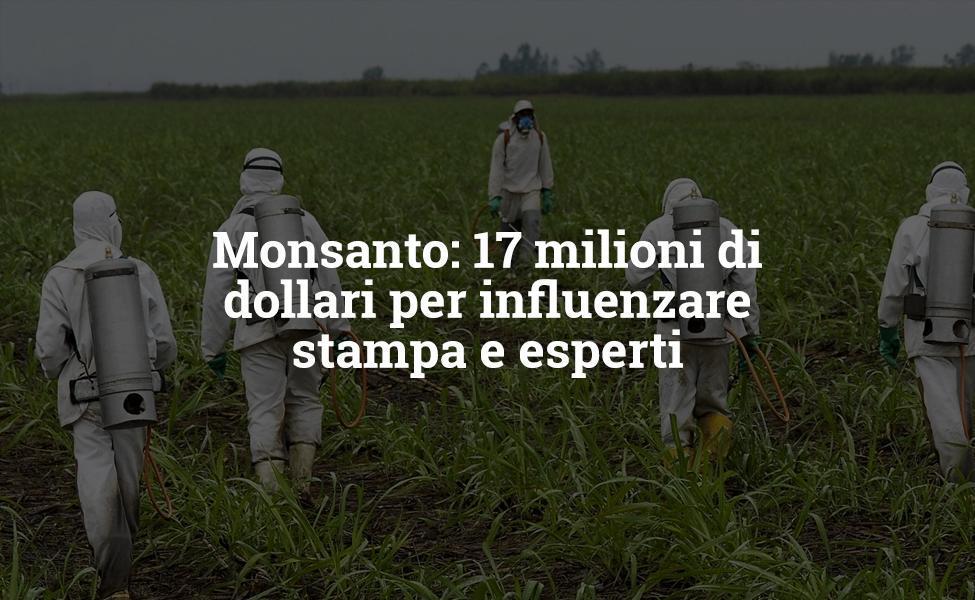 One problem after another falls on Monsanto's head: after the revelation that the multinational filed critical journalists on the use of glyphosate, a manager of the same company says that the biotech giant has set aside $ 17 million in a single year to influence the press and to oppose the positions of critical scientists. The evidence, according to what the portal reports US Right to know, were obtained from lawyers representing cancer victims suing Monsanto.

The deposition to the trial

The internal workings of Monsanto's public relations operations have been explained in a videotaped deposition of Sam Murphey, Monsanto executive, on January 22nd. Murphey's work at Monsanto included directing global media relations and "advocacy efforts in support of major litigation, political issues and reputational threats" involving the glyphosate-based herbicide business. Murphey now works for Bayer after the German company bought Monsanto last summer. Since the International Agency for Research on Cancer (IARC) has reviewed the published and peer-reviewed scientific literature on glyphosate and found that the herbicide is likely carcinogenic, with a particular association to non-Hodgkin's lymphoma, hundreds and then thousands of sick people have sued the agrochemical giant.

“Even shortly after the IARC classification of glyphosate, and continuing to this day - writes US right to know - cancer scientists have been the object of condescension from a wide range of organizations, individuals and even some US lawmakers. They have been accused of operating not on a solid scientific basis, but on behalf of a political agenda, to collect data and promote the science of garbage, among other things. The criticisms have been amplified and repeated all over the world in news articles, opinion articles, blogs, Google Internet advertising and more ”. Internal Monsanto documents that emerged from the discovery of more than 11.000 lawsuits filed against the company show that, among other tactics, Monsanto secretly used third parties for its anti-IARC message because executives and public relations agents they thought the information would appear more credible from entities separate from Monsanto.

In his deposition, Murphey was asked how much the company spent trying to question the IARC classification. Here's a little bit of the exchange:

Prosecutor Pedram Esfandiary: "So it is true that Monsanto has allocated millions of dollars to respond to the IARC classification, right?".

Murphey: "We - we have - had to spend a significant amount of resources over the course of several years, correcting misinformation and addressing questions in the public about glyphosate."

Esfandiary: "Has Monsanto allocated millions of dollars to respond to the IARC classification?"

Esfandiary: "Do you know approximately how much Monsanto awarded it in 2016?"

Murphey: “I can only speak in the context of, you know, public affairs activities, you know, things that I would have been directly involved with. But in 2016, you know, I think for some of the projects I was involved in, it was around 16 or 17 million. "

Esfandiario: “16 or 17 million dollars… have they been assigned to answer the IARC clarification (stet)?

Murphey: “No, not specifically and focused exclusively on IARC. Is - would have focused on commitment, onmedia relations and other activities on glyphosate, more generally ".

"And how much did you spend on scientific research?"

Esfandiary then asked Murphey how much it would cost the company to perform a long-term biological cancer test of its formulated glyphosate products, which the company acknowledged never having done. Murphey said he didn't know.