Tetanus - Vaccination: the other side 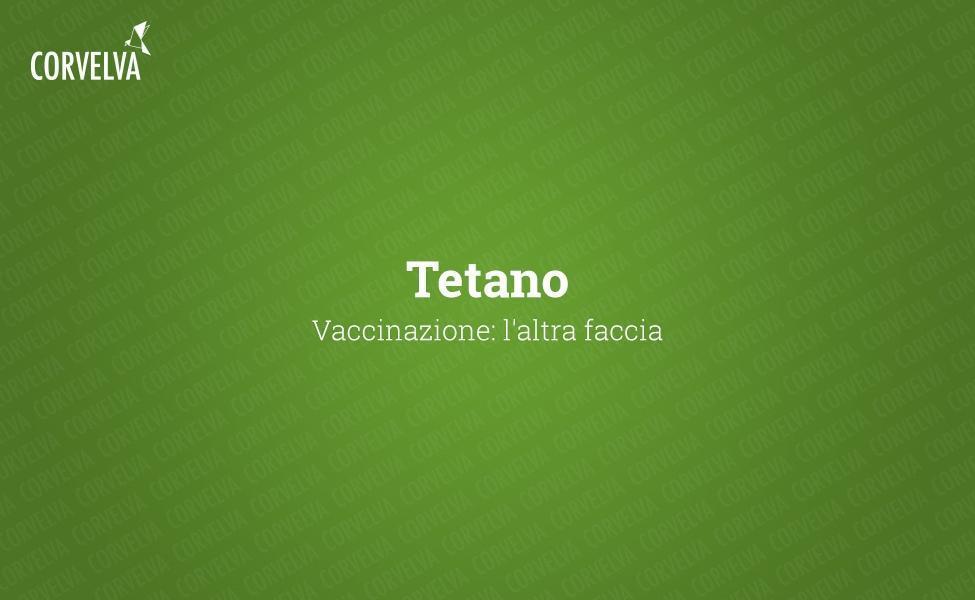 Tetanus is a serious nervous system disorder caused by spores that are trapped in wounds that are not properly cleaned and disinfected. Tetanus is not a contagious disease.
It is caused by the bacterium Clostridium tetani.

It is a Gram-positive bacillus that grows only in the absence of oxygen (i.e. it is anaerobic), and is present in nature both in vegetative form and in the form of spores. The germ in vegetative form produces a toxin, called tetanospasmin, which is neurotoxic and causes the clinical symptoms of the disease. It is one of an extremely powerful toxin, so much so that the lethal amount for a man is about 7 millionths of a milligram.

The bacterium is normally present in the intestines of animals (cattle, horses, sheep) and in the human intestine and is eliminated in the stool. Spores can survive in the external environment even for years and often contaminate dust and earth. They can penetrate the human body through wounds where, under suitable conditions (which occur especially in necrotic tissues), they can be transformed into the vegetative forms that produce the toxin.

The bacterium does not invade the tissues but the toxin reaches the central nervous system through the blood and the lymphatic system, interfering with the release of neurotransmitters that regulate the muscles, causing widespread contractions and spasms. (http://www.epicentro.iss.it/problemi/tetano/tetano.asp)

Symptomatology includes: depression, headache, muscle contraction, spasms of the jaw muscles (making it difficult to open the mouth), convulsions.
The incidence of mortality in untreated cases was estimated to be no more than 50%.
However, with proper care, healing occurs in about 90% of cases.

Tetanus affects less than 100 people a year in Italy. The average age of people in whom the disease is fatal is 70 years. Usually, people who die from tetanus are already weakened by many other conditions.
Neonatal tetanus is almost always fatal. It affects mainly in some poor countries where women give birth without taking into account (or without being able to) the most basic hygiene rules.

More than a century ago a gynecologist from the maternity ward of the Vienna hospital (Dr. Sennelweiss) had eliminated the deadly puerperal fever and the tetanus that killed puerperas and newborns with a simple hygienic norm: he had forced the health personnel to wash their hands before to enter the delivery room. This common sense rule was fatal to him because of the success of his department. The other colleagues, who had high levels of mortality in their wards, had him locked up in an asylum, where he died.

Do you think things have changed a lot?
It has often been claimed that tetanus vaccination has made the neonatal tetanus disappear. In reality, vaccination has nothing to do with the reduction of almost 100% of cases, since the vaccine is never administered under 2 months of life….

By L.Chaitow, The dangers of vaccination, Ipsa ed .:

“One of the keys to the efficiency of the immune nervous system is the relationship between inducer (helper) T lymphocytes and suppressor T lymphocytes. Inducing T cells help B cells to produce antigens, and also participate in the function of destroying viruses and cancer cells mediated by other types of T cells. Suppressor T cells modify and regulate the degree of response of any antiviral or anticancer activity . All cooperate in the harmonious development of the immune function. Among the T lymphocytes, about 60% are made up of inducers, while suppressors represent 20/30%. This proportion is very important and, if a change occurs, it can indicate a serious compromise of the immune system. Checking the proportion between inducers and suppressors is one of the main methods to ascertain the first signs of AIDS (acquired immunodeficiency syndrome). The New England Journal of Medicine of January 19, 1984 reported a report on a study done on 11 healthy individuals, in order to determine the effects of booster tetanus vaccinations on the relationship between inductive and suppressed T lymphocytes. The method used was the complex method of studying indirect immunofluorescence, before and after vaccination. The results showed that the normal ratio had been substantially changed in 4 of the 11 healthy subjects. The imbalance had been recorded between the third and eleventh days since immunization, after which there had been a return to normal intercourse. Although the effects were temporary, it was evident that there had been severe impairment of immune function. What effects may occur on children, in similar circumstances, will be to be ascertained in further research, but we cannot see how to avoid the conclusion that the repeated vaccinations, of one type or another, to which children are subjected, especially in the first year of life, they must lead to alterations in the proportion between inductive and suppressor T lymphocytes. This could be the genesis of the increase in allergic responses in younger children.

The best way to prevent tetanus is prevention, by cleaning and disinfecting all wounds thoroughly, and hydrogen peroxide where possible is the best solution.
However, tetanus is a disease that can be treated, even with antibiotics.

"To reduce the danger of serious reactions to tetanus vaccination, the vaccine has been significantly diluted, making it clinically ineffective (I.Golden, Vaccination? A review of risks and alternative. Geelong, Victoria, Australia: Arum healing Center, 1991). Robert S. Mendelsohn, But doctor, about that shot ... The risks of immunizations and how to avoid them, Evaston, Il: The people's doctor Newsletter, inc, 1988). "

Searching in the international literature and in the databases of the various sites, you can find a lot of material that is not available in Italy; on the website of the CDC in Atlanta (center taken as a reference by almost all the ministries of health in the world), among other things you can find the following, referring to tetanus:"Efficacy of the toxoid has never been studied", "the efficacy of the toxoid has never been studied"

Some doctors report that tetanus anatoxin does not protect and has a high fatal incidence (H. Allen, Don't get stuck: the case against vaccinations and injections, Oldsmas, FL: Natura Hygiene Press, 1985)

To confirm: Neurology 1992, 41: 761-764
Severe tetanus in patients immunized with high anti-tetanus titers: (excerpt from the article)
“Severe (grade III) tetanus occurred in three patients who had high levels of anti-tetanus antibodies. The disease was fatal in one patient. One patient erred under-immunized to produce commercial tetanus immunoglobulins. Two patients had received vaccinations one year prior to the disease. The anti-tetanus antibody titers were 25 IU / mL at 0,15 IU / mL by the hemagglutination and ELISA test.

However, this disease was disappearing steadily in developing countries long before the introduction of the vaccine. Some researchers attribute this decline to increased attention to hygiene rules in healing wounds. During the Second World War, 12 cases of tetanus were recorded: four of these, or 33%, concerned adequately vaccinated soldiers (E. Mortimer, Immunization against infectious desease, Science, vol. 200 - 26/05/1978, p.905 )

Moreover, it is difficult to imagine that a vaccination against tetanus would be effective, since a first attack of the disease does not confer immunity (Kitosato, Toledo and Veillon, Vaillard) and, in the laboratories, the superimmunized horses that serve can be seen to die of tetanus to the production of tetanus serum. (Dr. R. Rendu, Le presse medicale, 1949)

This ineffectiveness was publicly recognized at the time of the launch of the new IPAD tetanus vaccine, on the occasion of which the French learned that "the excellent Ramon vaccine, developed in 1926, sometimes caused allergic reactions and was not most used, so we ended up using only serum "(Science et vie, March 1974)

One wonders then what the obligation of vaccination has served. It can only be seen that the "excellent Ramon vaccine" developed fifty years ago has shown its total uselessness.

In addition to not being guaranteed that this vaccine will work, the side effects are not reported: in the American drug book, the Physician's Desk Reference, page 1403, you can read the side effects of the tetanus vaccine produced in Lederle (instead in the Italian Pharmaceutical Repertoire there is very little about it): erythema, induration, swelling with local reactions, nodules, abscess formation, subcutaneous atrophy at the injection site, fever, headache, myalgia, "arthus" type reaction, neurological complications such as convulsions, encephalopathies, polyneuropathies, guillan syndrome Barrè, urticaria, erythema multiforme, arthralgia, anaphylactic shock.

It reads again: "Numerous reported cases have been found in the literature describing transverse myelitis after administration of tetanus vaccine boosters (……) A number of cases reported in the literature associate the development of brachial neuritis with the administration of tetanus toxoid (it turns out that this pathology that arises in vaccination references is more widespread than that reported in the literature, ed). .... A causal reaction between vaccination with diphtheria and tetanus toxoids and arthritis is biologically plausible. "Adverse events associated with childhood vaccines - Evidence bearing on causality" - Vaccine safety Committee, ibision of health Promotion and Disease Prevention, Institute of Medicine - National Academy Press, Washington DC, 1993

From the American drug book PDR (Physician Desk Reference): In 6% of tetanus cases reported during 1982-1983, no injury or other conditions could be implicated. No acute skin lesions such as ulcers or medical conditions such as abscesses were reported in 17% of cases. ”In these cases the only exposure to the tetanus toxoid had been through vaccination.

From the book "Tetanus and diphteria immunity in urban MN adults" by K. Crossley. “This study verified how many had received the difto-tetanus vaccine from an adult population of St. Paul in Minnesota. Those who said they never received the tetanus vaccine showed protective titers in 25% of cases (14 out of 57). Why then does the CDC claim that there is no natural immunity against tetanus toxoid?

Damage from tetanus vaccine
From the Journal of the Neurological Sciences, 1978, 37: 113-125 Study summary: “The only case is recorded in a 42-year-old patient who had suffered from three episodes of demyelinating neuropathy, each of which following an injection of tetanus toxoid. The clinical picture on each occasion was characteristic of acute idiopathic polyneuropathy. Nerve conduction studies performed during the second and third episodes showed evident slowing of conduction velocity. A biopsy was performed on the sural nerve after the third episode and observation under an electron microscope including a prominent hypertrophic modification shows mediated macrophage demyelination.

Some other bibliographical references:

These are just a few hints, those who want can have fun and continue the search, will find bitter surprises ...

Last reflection: until 1900 the land was worked without the aid of machines and fields were fertilized exclusively with manure, primary source of the spread of tetanus spore. The works were carried out with bare hands resulting in: cuts, abrasions, etc.etc. Yet there were no tetanus "epidemics". Why? Of course tetanus is a dangerous disease, due attention must be paid, as for all other diseases, but we are convinced, also thanks to the above, that vaccination does not solve the tetanus problem, only with our attention and common sense we can prevent it. Why then were there no epidemics? Because the immune system creates tetanus antitoxin antibodies even without vaccination, and this is demonstrated by the analysis of the tetanus toxin IGG made on unvaccinated children ...