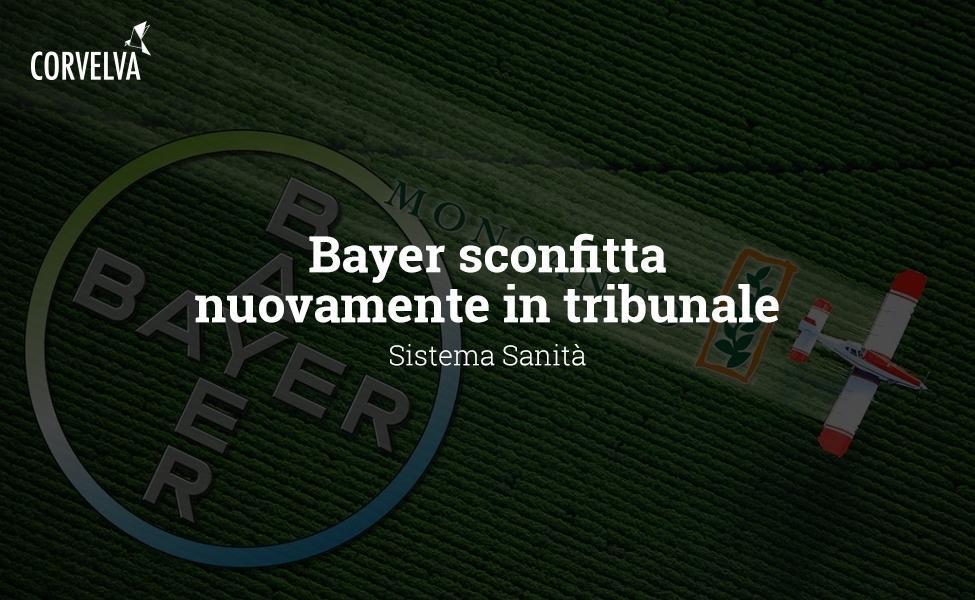 "The pesticide containing glyphosate was a determining factor"In causing cancer a Edwin Hardeman, a XNUMX-year-old man who has used Monsanto's Roundup herbicide for over ten years in his garden.

On March 19, a court in San Francisco, the United States, has established that Roundup herbicide, one of the most widely used in the world, is among the factors that caused non-Hodgkin's lymphoma (a type of cancer) to a Californian man, Edwin Hardeman. Now the court will have to decide what are the responsibilities of Bayer, the German chemical and pharmaceutical multinational that in June had bought Monsanto, the Roundup manufacturer. Monsanto before and Bayer after have always denied that glyphosate, the chemical underlying Roundup, has carcinogenic effects; As of today's hearing, Hardeman's attorneys will present evidence that Bayer has influenced scientists, politicians and consumers on the safety of its products despite the risks associated with them. Following the release of the ruling, the value of Bayer's stock fell nearly 12 percent on the Frankfurt stock exchange.

This isn't the first time a San Francisco court has ruled that herbicide use is linked to non-Hodgkin's lymphoma: it had already happened last August, in the case of former gardener Dewayne Johnson. In the United States, there are more than 11 other complaints related to the use of Roundup. Hardeman is 70 and used the Roundup regularly from 1980 to 2012.

Roundup was the first herbicide based on glyphosate to be marketed and is still the most used in the world: its use is approved in 130 countries on more than one hundred different crops. Until 2001 Monsanto held the production patent, but since the exclusivity expired the substance has been used by many other companies, making it the most common in herbicides sold in Europe. Monsanto has always maintained that using Roundup is safe and does not cause cancer. In 2015 the World Health Organization (WHO) included glyphosate in the list of substances "probably carcinogenic". The decision followed a study by the International Agency for Research Against Cancer (IARC) which found glyphosate is likely to be carcinogenic, despite not being proven. In 2017, the European Chemicals Agency (ECHA) decided to do not classify glyphosate as a carcinogenic substance because he believed that there was not enough evidence to support him.

As then Monsanto insists in his defense by replying to the new verdict that studies have established that the glyphosate contained in the Roundup is safe. While Bayer declares himself "disappointed" by the verdict. But markets fear that this is only the beginning of the judicial debacle that could take on gigantic proportions, as more than 11 complaints have already been filed by farmers, gardeners and consumers in the United States against Monsanto's Roundup. In the morning the Bayer stock fell by 12,5% ​​to 60,94 euros on the Frankfurt list, down by 1%. Since last June, the stock has lost around 50% of its value.

If when Bayer announced the acquisition of Monsanto, it raised many controversies attracting criticism from many European consumers who feared the arrival in Europe of GMOs developed by Monsanto, so much so that the German group has already announced its intention to cancel the name Monsanto , today the ogre is glyphosate. A controversial topic also in Europe, both within the scientific community and at the political level. Last August the European Parliament, dividing, gave the green light to the use of glyphosate for another 5 years. In favor of the Germans, Italian and French against.

It is the second blow to the multinational of the most famous herbicide in the world and for now, classified as 'potentially carcinogenic'.

We had already talked about another sentence and a substantial compensation, what Monsanto should give to Dewayne Johnson, the gardener who had used glyphosate for years and then contracted non-Hodgkin lymphoma.

Now, in the second trial, what he sees on the one hand Hardeman (also with the same disease) and on the other the American giant, the California court has ruled that glyphosate "Was a determining factor" in procuring cancer.

It is not a definitive sentence clearly, but what happened in the courtroom on March 19th is already a step forward.

In the second phase, the jurors will have to ascertain the damages and the responsibilities, evaluate the evidence that had been previously excluded for fear of manipulation by Monsanto.

But Hardeman and Johnson, are not the only ones to sue the company, there are almost 11 thousand people in the same vein.

Bayer's reaction, which we know, bought Monsanto in November 2018, is immediate. Here's what it says:

"Science will confirm that glyphosate does not cause cancer. We are confident that the evidence in the second phase will show that Monsanto's conduct has been appropriate and that the company should not be held accountable. "