Thus the Big Pharma take resources away from the States 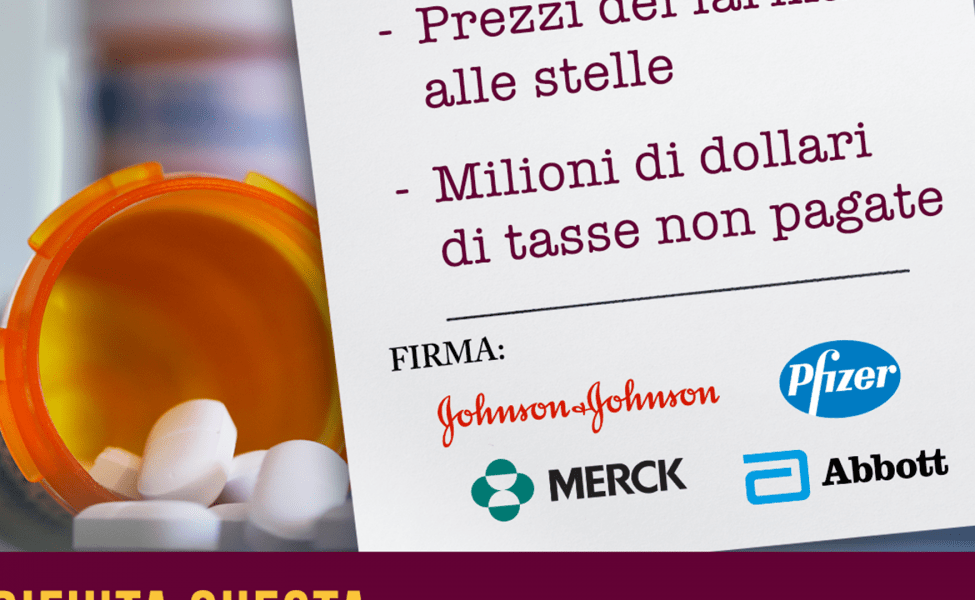 An Oxfam report denounces the removal of tax resources and aggressive behavior on the prices of medicines by 4 giants of the pharmaceutical sector. Estimates of 3,7 billion dollars a year are estimated between 2013 and 2015 in advanced economies, 270 million dollars a year only for Italy

The most important pharmaceutical companies in the world endanger the health of citizens, depriving governments of precious tax resourceswhich could be invested in strengthening public health systems, and compromising the possibility of access to essential medicines for millions of people. Furthermore, it is not uncommon to misuse one's influence to counteract attempts to contain the cost of drugs and strengthen public control and supervision activities in the sector.

This is what emerges from the new report Prescription for poverty published today by Oxfam, which examines the direct and indirect impacts on economic and health inequalities attributable to the activities of Pfizer, Merck, Johnson & Johnson, and Abbott Laboratories. Notes for products like Neutrogena, Polase, and Brufen, but also for many life-saving drugs, they are among the most important companies in the pharmaceutical sector, with a revenue volume of 1.800 billion dollars in the decade 2006-2015. An amount slightly less than the Italian GDP in 2016.

Oxfam has conducted an analysis of the consolidated financial statements filed by the parent companies in the United States and examined the public budgets of 359 subsidiaries of the 4 groups in 19 countries in the 2013-2015 period, finding traces of a potential transfer of profits from medium-high tax countries to tax-facilitated jurisdictions.

"Aggressive tax planning, without likely contradicting the provisions of the law, raises serious questions about compliance with the spirit of tax regulations and that tax equity, which some of the companies examined explicitly declare to be inspired by their mission and corporate policy", said Elisa Bacciotti, director of Oxfam Italia's campaigns.

So much in the advanced economies examined (Australia, Denmark, France, Germany, Italy, New Zealand, the United Kingdom, Spain) and in the emerging markets and developing countries (Chile, Colombia, Ecuador, India, Pakistan, Peru and Thailand) the average margins of to evaluate by Pfizer, Merck, Johnson & Johnson and Abbott before tax are results extremely low: 7% and 5% respectively in the three-year period 2013-2015. In other words, a gross profit of just 7 and 5 cents per dollar billed.

Yet on a global scale, the four giants have told the US Consob to the SEC, annual profits which in some cases reached 30% of revenues. The missing profits have not evaporated, but it has been found track in four corporate tax havens (Belgium, Ireland, Netherlands and Singapore). Oxfam has found in these countries average pre-tax profit margins of 31%.

The non-governmental organization estimates that the potential transfer of profits to tax-privileged jurisdictions may have resulted overall tax losses for advanced economies amounting to 3,7 billion dollars per year in the three-year period 2013-2015.

For Italy, in which the pre-tax profit margin was on average 6%, the tax under-contribution by the 4 giants could have caused an annual shortfall of 270 million dollars.

The report also highlights how pharmaceutical companies harm the health of the poorest people by applying them surcharges on drugs and thus making them inaccessible. One example is the standard twelve week cycle of Paclitaxel, an anticancer drug manufactured by Pfizer for $ 1,16 and resold in the United States for $ 276 and in the United Kingdom for £ 912.

Il cost of drugs has experienced a surge in recent years. In 2017, seven of the nine best-selling drugs from Pfizer, Merck and Johnson & Johnson in the US experienced price increases of over 10%. The cost of Lyrica, a neuropathic pain medication in diabetic patients saw last year a 29% rise by Pfizercontributing to sales of over $ 4,5 billion. The cost of the monthly treatment with Ibrance, a drug manufactured by Pfizer for the treatment of metastatic breast cancer, stood in the US market at just under $ 10.000. An unsustainable price in the United States, where the cost of medical expenses is the leading cause of personal bankruptcy. In low- and middle-income countries, these prices also place public health budgets under severe pressure, forcing the state to pass the expense directly on the sick and their families. It is, for example, the case of the bedaquiline, a drug for the treatment of complex multi-resistant tuberculosis. The cost of six-month therapy in South Africa, set by a Johnson & Johnson subsidiary, is $ 820. A price that excludes its availability for most of those who would need it, given that the estimated cost of a generic equivalent, if available, would be around 48 dollars.

"Strategies for tackling high drug prices and fostering innovation tailored to patients' needs must remain a top priority for governments. - concludes Bacciotti - It is worth mentioning here the report of the UN Secretary General's High Level Panel on Access to Medicines, which details a series of recommendations to Governments to accelerate the implementation of urgent reforms aimed at ensuring accessible and affordable health technologies for those who they need it. Actions are needed both nationally and globally. Italy, who in the past has been able to put the needs of their patients at the center of negotiations on the price of drugs (as in the case of hepatitis C), it must be at the helm of a global impetus towards innovative strategies to make drugs available and accessible to all, even in poor countries".

Finally, the conditioning of the entire US political spectrum by the pharmaceutical sector is not overlooked, whose expenditure for lobbying (200 million dollars a year and an army of 1.500 people in 2017) is unrivaled among companies from other sectors. An action conducted to protect its interests in both health and tax matters, as well as to strengthen its commercial positions. Among the pharmaceutical companies featured in the report, Pfizer is in second position for shopping for lobbying, followed by Johnson & Johnson in sixth, Merck in seventh, and Abbott in thirteenth.