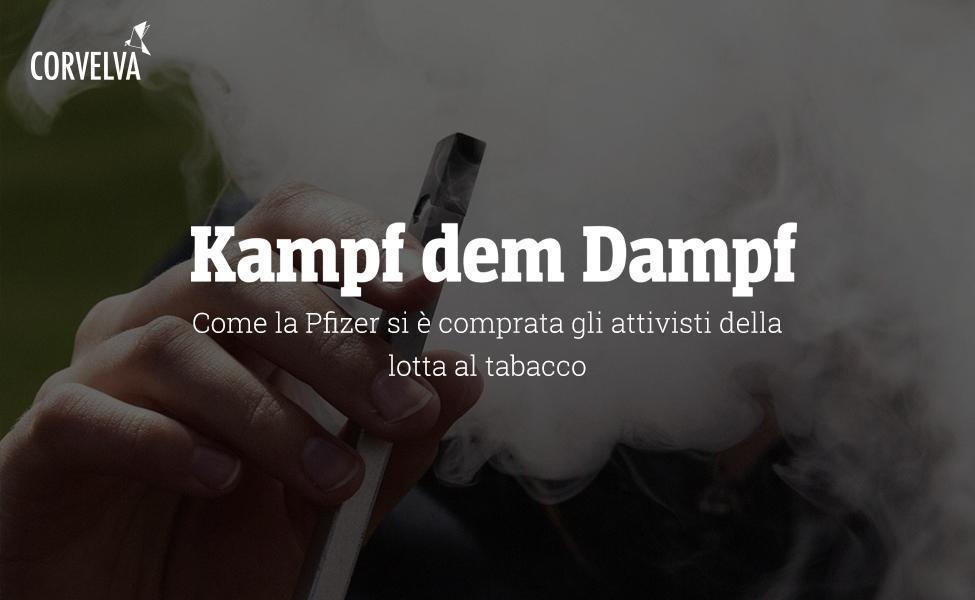 In short: the weekly Spiegel released an investigation on August 23 that shows how Pfizer paid an association to combat smoking in order to combat electronic cigarettes. Why? But it goes without saying: Pfizer makes too good money from selling all kinds of nicotine-containing products to help smokers quit and e-cigarettes were increasing sales, so nicotine addicts were decreasing, less earnings for Pfizer who had to "treat them" ".

The Non-Smoking Action Alliance (ABNR) is an association of eleven major non-governmental health care organizations from Germany, which group their political activities in the field of "promoting non-smoking and informing about the dangers of secondhand smoke". The ABNR project includes the "Tobacco Prevention Network Office", a real alliance against tobacco addiction.
Among the members of ABNR we find the German Medical Association, the German Cancer Research Center in Heidelberg and important associations of medical specialists in the cardiac and pulmonary sector.

ABNR's leader, Dr. Martina Pötschke-Langer, has grown in fear by fighting bitter battles and has become the activist par excellence against cigarette smoking.
More recently, however, he continued with a strange fury to fight against electronic cigarettes which, compared to tobacco, are much less harmful and it is now revealed that Aktionsbunis Nichtrauchen (ABNR) has secretly received money from the pharmaceutical industry Pfizer early years of course change.

Note: 51% was the growth rate of e-cigarettes in retail in 2017 compared to the previous year; all over the world.

In 2005 ABNR received a donation from the American company Pfizer of 180.000 euros for the creation of a lobby office in Berlin and this is demonstrated by the internal documents viewed by Spiegel. The reason for keeping the donation hidden is easily imaginable, the credibility of ABNR would have been jeopardized. The donation has never been publicly disclosed and appears only in an internal budget, without indicating the origin.

Of course, the pharmaceutical industry also pursues its interests. It sells all types of nicotine-containing products to help smokers quit smoking: patches, chewing gum and sprays, known by brands such as Nicorette or Nicotinell. In addition to Pfizer, companies such as GlaxoSmithKline and Novartis were also involved in 2005. Worldwide sales of nicotine substitutes are estimated at just under two and a half billion dollars.

In the meantime, a drug called Champix, which is expected to act directly against nicotine addiction, is selling very well. The manufacturer Pfizer is therefore already over a billion dollars a year, more than with Viagra and hence the question: an Alliance of activists and professionals for the fight against smoking, is capable of independent action when to finance its Lobbying office is the company that earns the most from its lobbying action?

In recent years, the pharmaceutical companies that made the most money from nicotine-based products have been under pressure from an obvious rise in the electronic cigarette. Since 2013, smokers who wanted to escape tobacco addiction have had new tools at their fingertips: small devices that vaporize flavored liquids, generally mixed with nicotine.

The consumer aspires from an electronic instrument as with a cigarette, only far less dangerous for health because nothing is burned in electronic cigarettes, therefore not all carcinogenic substances found in tobacco smoke are taken.

Certainly the vapor inhaled by electronic cigarettes is not clean air, especially if the presence of nicotine exists in the mixture, however the electronic cigarette is about 95% less harmful according to the estimate of the British health authority Public Health England. A research team led by American economist David Levy calculated what would happen if all smokers in the United States converted to steam. Their results: up to 6,6 million premature deaths could be avoided within ten years.

It is therefore not surprising that sales of steam products are constantly increasing, by over 50% worldwide in 2017 alone according to the latest data. And where the more this new tool is used, the more the pharmaceutical industry suffers economically.

The statements by the head of the Frankfurt Institute for Addiction Research have been very positive: "Hajek's study is methodically valid and is considered a milestone among experts."

However the ABNR continued to draw peculiar conclusions from the pleasant discoveries and continued to attack electronic cigarettes, as it had done in previous years

"The electronic cigarette must be regulated as rigorously as tobacco and with higher taxes," reads a recent note from the ABNR. Just a few years ago, ABNR also fought against the classification of steam appliances to bring them back as pharmaceutical products, thus imposing a radical change in the technology used, above all to be realized immediately. Since the electronic cigarettes market is mainly composed of small producers, with a growing but still limited production by the pharmaceutical industries, this would have made it impossible for small ones to face the very expensive registration procedures with regulatory bodies.

At present, Aktionsbündnis calls for a total ban on advertising electronic cigarettes and this, although it can be considered a legitimate position, still leaves us perplexed by reading the questionable justifications: "steam ruins youth, it is a passing drug for the cigarette smoke. " Obviously there is no evidence of this, and the independent researcher Stöver says so too.

One thing that the ABNR has strongly recommended to date is help through a smoking cessation therapy, which by pure coincidence involves the use of products from the pharmaceutical industries.

By the time Pfizer's large donation arrived, the cooperation had already started and was so close that a permanent representative of the pharmaceutical company was even a member of the Aktionsbündnis "steering committee". The steering committee, as you well know, is the body in which legislative initiatives are discussed, where strategies are developed and contacts are made in politics and therefore Pfizer has achieved a lot from this position.

This Pifizer representative's job was to increase Nicorette's sales. When Johnson & Johnson, Pifizer's direct competitor, took over the business in 2006, the representative also passed to the new employer. He remained closely linked to ABNR even years later, until its release in 2013.

ABNR reiterates that its critical vision towards electronic cigarettes is purely scientific, dictated by the evidence and since 2009 it has no longer received funding from the Industry. However, some affiliated institutions continue to do so. Last year, ABNR members received over 360.000 euros only from Pfizer and GlaxoSmithKline (GSK).

Pfizer for its part has recently experienced spectacular success in the United States. After taking office in May 2017, FDA director Scott Gottlieb has become a powerful opponent of electronic cigarettes and has warned against a real "epidemic" of nicotine addiction among adolescents caused precisely by electronic cigarettes. Recall that in April of this year, FDA chief Gottlieb suddenly resigned from office - he joined Pfizer's board of directors in June.

There have also been strange lateral changes in this country: in May 2017, Stefanie Seltmann, confidant of the head of the ABNR, became director of external communications at Pfizer's headquarters in Germany. Previously, Seltmann had headed the German Cancer Research Center press office for years.