The forgers of science 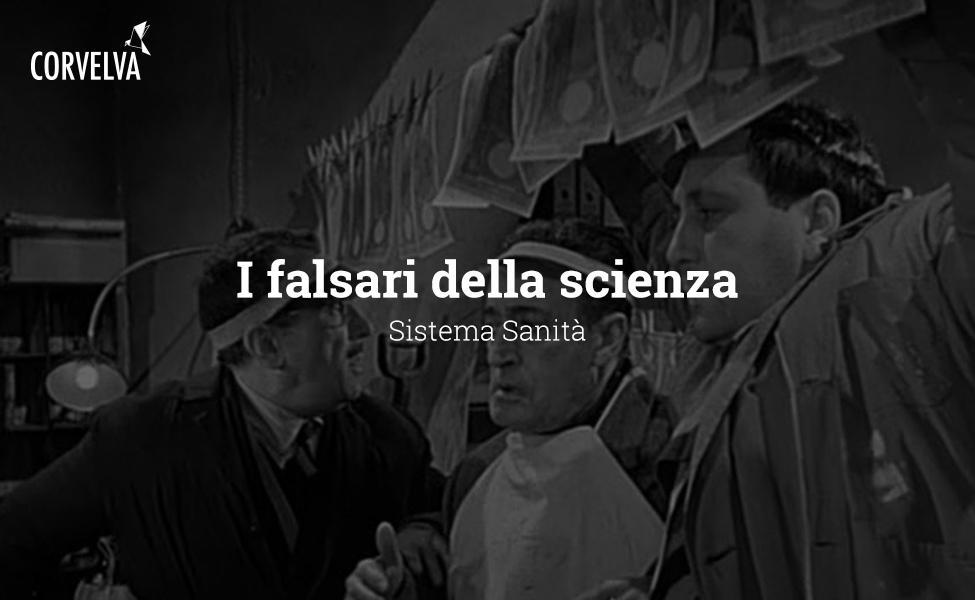 The promoters of SCIENCE, the one with the capital ESSE or Cikappian to be clear, are lately spending very eventful nights and certainly not for the African heat or mosquitoes.

It is also difficult to imagine the emotional situation of those four poor people who signed the ridiculous "Transversal Pact for Science ", wasting time and money to set up an association (not for profit) but whose mission is - think - the «promotion and diffusion of science and experimental scientific method in Italy in order to overcome any obstacle and / or action that generates disinformation on scientific topics».
They are so convinced that they wrote it in the association statute: "Science and Scientific Method ", have you read correctly? The reference is to the so-called "Evidence-based science ".

But getting into the piece: what exactly happened these days?

The umpteenth scandal in scientific research has fallen from heaven, precisely that "Evidence-based Medicine ". The Milan prosecutor's office has in fact just concluded a judicial investigation that provides a picture, to say the least, hallucinating: mega galactic directors (with Fantozzian abat-jour in human skin), super professors and luminaries of science in practice manipulating official data and documents ( cancer but not only) to pocket millions of euros from public funds, private donations and 5 per thousand collections.

Although they have been taken with the fingers totally immersed in the sweet jam up to the cufflinks of the shirts, we will unfortunately see that the rogues have licked and cleaned them well before the arrival of the judiciary ...

The even more indecent thing is that these "spoiled" and "falsified" studies have been safely published by the most prestigious scientific journals in the world!

Is this the SCIENCE OF EVIDENCE?

Nothing new on the horizon, indeed, it could be said that this is unfortunately the "normality", and Dr. Richard Horton, chief editor of the magazine "Lancet" knows something about it.

According to Horton, scientific publications have reduced to a mere "marketing operation disguised as legitimate science. Pharmaceutical companies have found ways to circumvent peer review control rules. In too many cases they manage to sow sectoral literature of low quality scientific works that they can then use to promote their products to doctors. Pharmaceutical companies are cheating us. We get articles with doctors' names on them and we often find that some of them know little or nothing about what they wrote».

This last rather shameful system makes use of the "Gost writer ", ghost writers, that is of totally unknown doctoral doctors who work for drug lobbies and for payment, write scientific articles that will then be signed by the ninety piece, by the great academic.

If a scientific article is signed by Mario Rossi does not have an interesting impact, but if the same is signed by a well-known and respected primary then it takes on a completely different connotation. It often happens, as Horton has perfectly explained, that many barons sign the articles without even having read them, because to them science separated from money and fame, it does not matter!

What are we talking about? In the period between 2005 and 2012 alone, the numbers moved were tens of millions: 9,37 million Di Fiore; 3,06 million Mantovani; 1,48 million Pelicci and 3,60 million Pierotti. So tens of millions of euros for cancer research went into the ciphered accounts of the gentlemen researchers.

The conclusion is shocking: «out of the 32 analyzed, 25 scientific publications were subject to manipulation».

We are talking about a percentage around 78%: nothing short of shocking. In practice most of the research is manipulated and functional for those who finance it.

In Italy, however, there is no crime

Scientists registered in the crime registers by PM Francesco Cajani e Paolo Filippini have been investigated for "false in private writing, ideological falsehood committed by the private individual in a public act and scam ".

After three years of investigation, the PMs concluded that the facts had been ascertained, the manipulations had been proven, but There is NO crime in Italy that allows you to put them on trial.

So they had to ask the preliminary investigation judge, Sofia Fioretta, archiving the case!

Italy is a colony of the Empire, and in fact in the States judges have often sentenced and sent to prison researchers who had manipulated studies or research. It is no coincidence that the heaviest fines imposed on pharmaceutical companies were signed by American judges.

With us, however, the "academic delinquents", those who play with "creative mathematics", are not only not fired, but receive prizes by going to occupy better professional and social positions than before.

The two PM write in closing: «The proven manipulations, albeit worrying from the point of view of scientific impact, remain for the current legislation without criminal relevance».

It will be irrelevant to current legislation, but these are highly relevant gravities for human society: the falsified studies in fact allow Big Pharma to bring on the market drugs (chemotherapy) and dangerous poisons.

The case of Dr. Scott Reuben

What the Prosecutor has discovered is simply the classic trick or scientific scam mechanism. These are well-known and well-known things, and the case of the doctor Scott S. Reuben it is the emblem of all this.

Scott Reuben was a professor of anesthesiology and pain medicine Tuft University of Boston, and head of the Department for acute pain at Baystate Medical Center of Springfield before being sentenced to prison for medical fraud.

On January 7, 2010, he candidly admitted that he never did any of the research published in his name. The strange thing is that he has published many!

Pfizer for example gave the doctor 5 research grants between 2002 and 2007, and her studies supported the antidepressant Efexor as a painkiller ...

It is estimated that his "scientific articles" and his "research" (never done) published by the world's leading scientific journals have on one hand collected billions of dollars from pharmaceutical companies for drugs such as Vioxx, Celebrex, Efexor, Bextra, Arcoxia, Lyrica, Neurontinand on the other millions of deaths from heart complications and not only ...

The magazine Scientific American called Reuben, the Bernie Madoff in a white coat (Madoff is the American banker convicted of one of the biggest financial frauds of all time: $ 65 billion).

Is this evidence-based science? But evidence of whom?

The only thing that is widely evident is that "scientific research" is managed and controlled by those who have the money to do it: private companies. In the medical field from the chemical-pharmaceutical industries.

Only private companies, globally, have the money to finance most of the studies, the results of which will be subsequently published in the journals that count, those with the highest "impact factor"(impact factor).

So almost all scientific research, apart from a few sporadic cases, is manipulated and functional.

In fact, if the lobby pays for a search, it is obvious to say that the results cannot deviate from the general line: they will have to align with the wishes of the clients.

For true research this limit is absolutely devastating.