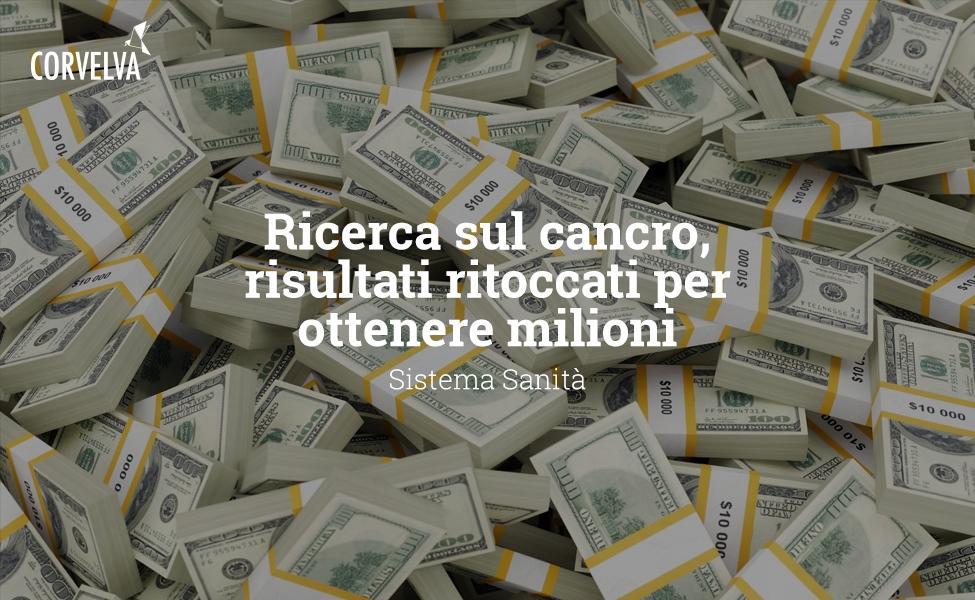 There is no adequate law against scientific fraud

We report below the article of Il Fatto Quotidiano (link below). In essence, according to prosecutors, we are faced with scientific fraud perpetrated by well-known professionals entering the system and receiving public funds. But there is no law that allows to protect the reliability and credibility of scientific publications.

First reflection: recently on several occasions we have been accused as Corvelva of having "asked the people for money" to finance the analyzes, commissioned by independent laboratories, on vaccines. Well Corvelva, an association of private citizens, has used its membership fees and donations - received specifically for this stated purpose - to commission experimental analyzes that a parliamentary commission had indicated as necessary and that the State did not consider having to carry out. These gentlemen instead used state funds, therefore coming from our pockets of citizens, to defraud scientific works whose impact then pours on all those who, unsuspecting, accept treatment methods defined as "safe" according to the same scientific publications. Result: we are called "novax", "antiscientific", "public dangers", and so on, by the so-called "Scientific Community". Instead, they did not receive any public blame from the same. In other words, those who defraud are not criticized, those who invalidate the credibility of the scientific world with their work are not radiated and continue to be beautifully in their place. A newspaper article, no media coverage, in a few days everything will be forgotten ....

Second reflection: if a law is missing, perhaps we could schedule a forthcoming collection of signatures for a popular initiative law that incorporates those of foreign countries. After the proposed law of popular initiative for the freedom of choice, perhaps we should present another against scientific fraud. Perhaps, at this point, citizens called "novax" should be responsible for protecting scientific transparency ...

Certainly a profound reflection is required on the reasons for the growing mistrust of citizens towards public institutions, especially and especially in the health sector.

Involved some of the most famous teachers in Milan, but the Prosecutor must close: in Italy it is not a crime

The vice of Photoshop. Scientists engaged in cancer research have manipulated the images of their studies, thus succeeding in obtaining success, career, new funds for their research. The Milan prosecutor's office has just concluded a long and complex investigation, which provides a devastating picture: esteemed and respected professors, research luminaries who manage millions of euros from public funds, private donations, 5 per thousand collections, have been caught. to "fix" the documentation then published by the most prestigious international scientific journals.

PROFESSORS investigated are Pier Paolo Di Fiore (of Ifom, the research center dedicated to the study of the formation and development of tumors at the molecular level), Alberto Mantovani (of Humanitas, the research and care institute of the Rocca family), Pier Giuseppe Pelicci (of the Ieo, the European Institute of Oncology founded by Umberto Veronesi), Marco Pierotti, Maria Angela Greco, Elena Tamburini and Silvana Pilotti (of the National Cancer Institute).

They managed millionaire funding from the Ministry of Research, the Ministry of Health, the Higher Institute of Health, the CNR (National Research Council). They received, only in the period analyzed by the Prosecutor, between 2005 and 2012, very high figures: 9,37 million Di Fiore; 3,06 million Mantovani; 1,48 million Pelicci; 3,60 million Pierotti.

"From the first judicial police analysis of the Milanese research centers", the prosecutors write, "nine publications emerged, freely accessible, which contain manipulations, more or less serious, of the images attesting the alleged experiments". Other investigations uncovered "an additional 17 publications that contained image manipulations." Then the two scientific consultants appointed by the Milan Public Prosecutor analyzed "159 scientific articles referable to the authors being treated and containing images obtained with the gel electrophoresis technique". After reducing the field to a smaller sample, they concluded that "out of the 32 analyzed, 25 scientific publications were subject to manipulation".

The consumer association Codacons, the Italian Association for the Rights of the Patient, the National Cancer Institute of Milan and, finally, the Airc, the Italian association for cancer research, which manages millions of funds dedicated to cancer studies every year. The latter, however, did not pass unscathed by the criticisms of the Milanese prosecutors, who reported "the obvious conflicts of interest within Airc, whose scientific advisory commission decides on the destination of the funding (collected mainly with the 5 thousand) in favor of scientific studies conducted by the same components ". All in family.

Scientists entered in the crime registers by prosecutors Francesco Cajani and Paolo Filippini have been investigated for false private writing, ideological falsehood committed by the private individual in a public act and fraud. After three years of investigation, the prosecutors concluded that the facts have been ascertained, the manipulations have been proven, but there is no crime in Italy that allows them to be sentenced to trial. So Cajani and Filippini could not help but ask the judge of the preliminary investigation, Sofia Fioretta, to close the case.

IN THE UNITED STATES, the judges sentenced and in some cases even jailed researchers who had manipulated their studies. In France, the president of Cnrs (the counterpart of our Cnr), Anne Peyroche, was recently removed from her post for manipulating research. In Italy, however, scientific fraud cannot be prosecuted criminally. "The proven manipulations", the prosecutors write in their filing request, "even if worrying from the scientific impact point of view, remain for the current legislation without criminal relevance".

And they explain: "Airc loans, albeit large in amount in relation to the facts referred to in this criminal proceeding", are to be considered "disbursements by private individuals, consequently the illegal act would fall under the hypothesis of a simple fraud against private entities and always if the causal link between the loan and the beggar is shown ”.

Cajani and Filippini conclude that this case "requires a serious reflection on the need for an ad hoc penal discipline capable of providing adequate protection in the fight against scientific fraud", as has already been done for insurance and sports fraud. However, the Prosecutor sends the documents to the Court of Auditors, for "appropriate assessments" on the "reporting of public funding provided by the Cnr".