The Republic The pandemics scam June 01 2014 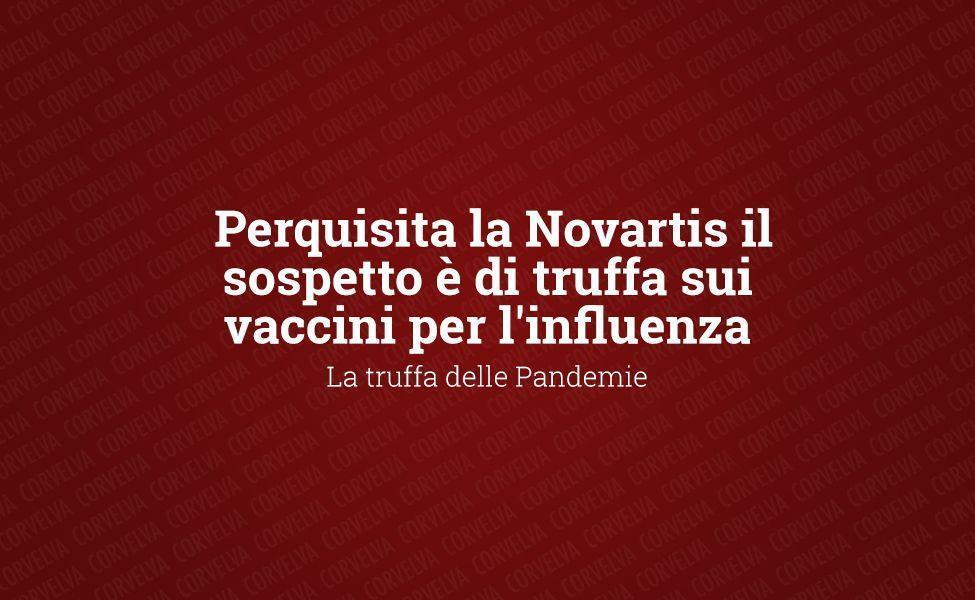 NOVARTIS, the Swiss pharmaceutical multinational until a few years ago considered among the most intact in the world, may have defrauded the Italian state by inflating the prices of the Focetria vaccine, used to counter in 2009 the pandemic risk associated with the flu strain AH1N1 (swine flu ), and perhaps also the prices of the Fluad vaccine, used against seasonal influences. Both vaccines are produced in the Novartis Vaccines and Diagnostics plant in Siena, which was sold to Glaxo in April. Yesterday the Nas carabinieri searched him, as did the Italian headquarters of Novartis Farma in Origgio (Varese). The prosecutor of Siena Aldo Natalini hypothesizes the crime of aggravated fraud against the State against the CEO of Novartis Vaccines and Diagnostics, Francesco Gulli. The company is under accusation for the administrative offense connected with the crime of fraud.

INQUIRY
It is a difficult time for Novartis. In March with Roche, a fine of 180 million was imposed by the Antitrust Authority for a cartel agreement on the treatment of maculopathies which for years imposed the use of the very expensive Lucentis (produced by Novartis) at the expense of the cheaper Avastin. Then came the claim for compensation of one billion and 200 million from the Ministry of Health. Now the vaccines deal explodes. Both the Focetria against swine flu and the Fluad against seasonal influences contain the adjuvant MF59, which is an essential component. The MF59 is produced in the Novartis Pharma GmbH factory in Germany. From the invoices, however, it is purchased by Novartis Usa. During a tax audit, the inspectors of the Revenue Agency found that the German factory supplies the MF59 at 660 euros per liter, while the American invoices show a price of 3.964 euros per liter, 500% more. The carabinieri of the Nas of Florence have investigated further, ascertaining that the active principle has always come from Germany: only the invoices have triangulated between Germany - USA - Italy, with a dizzying increase in prices. According to the accusations, therefore, we are in the presence of an intragroup over-billing mechanism, thanks to which the Ministry of Health, the purchaser of the vaccines, was deceived.

As often happens, the scam would have been favored by the emergency. On 11 June 2009, the World Health Organization declared the pandemic state related to the new influenza strain AH1N1. The Ministry of Health set up a Crisis Unit which foresaw, without adequate measures, the possibility that 9 million cases of swine flu occurred in Italy, whose lethality was assessed in the order of 0,1 / 0,5 deaths per 1000 people affected. Therefore, the Crisis Unit suggested to promptly vaccinate 40% of the Italian population, 24 million people. Between 17 and 21 July, the Undersecretary for Civil Protection Guido Bertolaso ​​manifested the Government's interest in Novartis and Sanofi Pasteur to purchase 24 million doses of flu vaccine. On July 31st, the Prime Minister Silvio Berlusconi commissioned the Ministry of Health to purchase the vaccines with the highest urgency procedure. The task of producing them was entrusted to Novartis, which in 2007 registered a precursor vaccine of the anti AH1N1 at the European Medicines Agency (EMEA). The central control section of the Court of Auditors, recognizing "the exceptional nature and urgency of the intervention", decided to endorse the supply contract with Novartis, although the fairness of the agreed prices had not been certified. The judge of the account was Vittorio Giuseppone, who was arrested on 3 June for corruption in the Mose investigation.

The price agreed with Novartis for the 24 million doses of vaccine was 184 million and 800 thousand euros. In 2010, after purchasing over 12 million doses, and since the unfortunate pandemic event had been limited to one case in Italy, the Ministry of Health asked Novartis to stop supplying the other 12 million vaccines not yet produced , for a value of over 97 million. Novartis turned to the Tar. The Ministry decided to look for a transaction. The agreement was reached in 2012. To justify its costs, Novartis presented the American invoices of the adjuvant MF59 (those in which the price was allegedly inflated by 500%). On that basis, the Ministry closed the agreement by paying almost 20 million euros: 2 million 700 thousand euros too much, according to the Nas. And not only. The carabinieri believe that the price agreed at the origin, in 2009, for the swine flu vaccine, 7 euros per dose, was affected by the artificial increase in the price of the adjuvant MF59. If so, multiplying the artificial increase by the more than 12 million doses of vaccine purchased leads to damage to the state of over 16 million euros. The estimate for any damage caused by the overcharge of the MF59 adjuvant applied to seasonal flu vaccines is currently being assessed. In a note Novartis states that "his work is, and has always been, based on full compliance with the law and current provisions".