Do you remember Sars, Swine, Avian? Here is what happened to them

The newspaper The pandemics scam January 23 2020 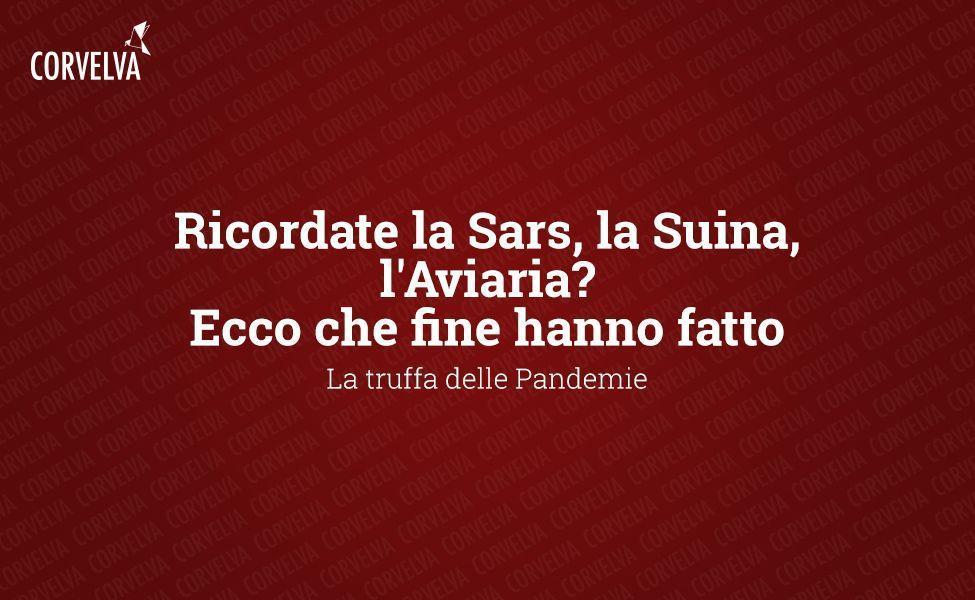 Wipe out or tame. The major health emergencies that alarmed the world are faded memories. They claimed victims but less of a seasonal influence

Mad cow disease has been eradicated, the swine virus has been tamed by the seasonal flu vaccine, Avian remains a serious veterinary problem but is no longer dangerous to humans.

The major health emergencies seem memories faded and supplanted by the new entry that upsets the world: Ebola. But it seems like a script already seen: first the creeping cases of the sick, then some dead and here the fever of a possible pandemic rises. So the planetary emergency plan starts and the WHO declares total war on this or that virus that could decimate the earth. With all the economic repercussions that this entails: millions of vaccine doses then thrown away, extreme security systems, tight controls where there would be no need, billions of euros or dollars in smoke, generalized psychosis. And in the end, real pandemics have not yet been seen. For every virus ascertained, there have been deaths, of course, but fewer than those who reap a trivial seasonal flu every year. In Italy, for example, this year ?? quiet season - about 4 million cases of flu are expected and an estimated 6-7000 deaths: double that of Ebola in all of Africa. And many other "lethal" viruses that have now become a memory.

For the first time diagnosed in the United Kingdom, mad cow disease (BSE) has profoundly affected the food supply chain and in 2001 exterminated the cattle farms of Europe. The technicians then predicted thousands of deaths because the infectious agent, the prion, could hit the man with the so-called variant of Creutzfeldt Jakob, a neurological degenerative disease. In the end the death toll was 163. Now the steak on the bone is no longer a dream of carnivores and there is no trace of BSE.

In 2002 Sars arrived. The Asian pneumonia that has monopolized the news from all over the world. In Italy the fear was magnified by the death of Carlo Urbani, the virologist who had discovered the virus and remained infected a few months earlier. In the end, Sars hit only Southeast Asia and Canada, recording 8 cases of contagion and 880 deaths. Only a rich income from the mask makers remains of its passage. Today there is no trace of Sars: the virus has returned to its natural habitat because it has lost its aggressive characteristics.

Just three years later, however, the alarm returns worldwide, with the technical name of H5N1. Bird flu, chicken fever, was poised to break out across the planet and make, according to the WHO, "at least a million dead." In reality the deaths stopped at 369 in spite of the experts who had compared it to the Spanish, of 1918, or to the Asian of '57 -'58. In the meantime, 40 million doses of antivirals have been stored in Italy alone while the US has purchased 192 million dollars of Tamiflu. Avian, however, still remains a major veterinary problem and no one excludes that the virus, still present in such a massive way in animals, can be transmitted to humans and thus become highly infectious.

The H1N1 Virus, for WHO, was to trigger the first pandemic of the twenty-first century. It broke out in 2009 with the first outbreaks in Mexico and caused about 18 confirmed deaths and infected 482 people. But there was nothing dramatic except the 229 million doses of vaccines in the United States sent to waste. Moreover, the number of victims is laughable compared to those who reap the winter flu, which kills between 250 and 500 people worldwide every year. The H1N1 virus has now been incorporated into the normal flu vaccine and no longer frightens anyone.