Here's how Bill Gates became "master" of the WHO 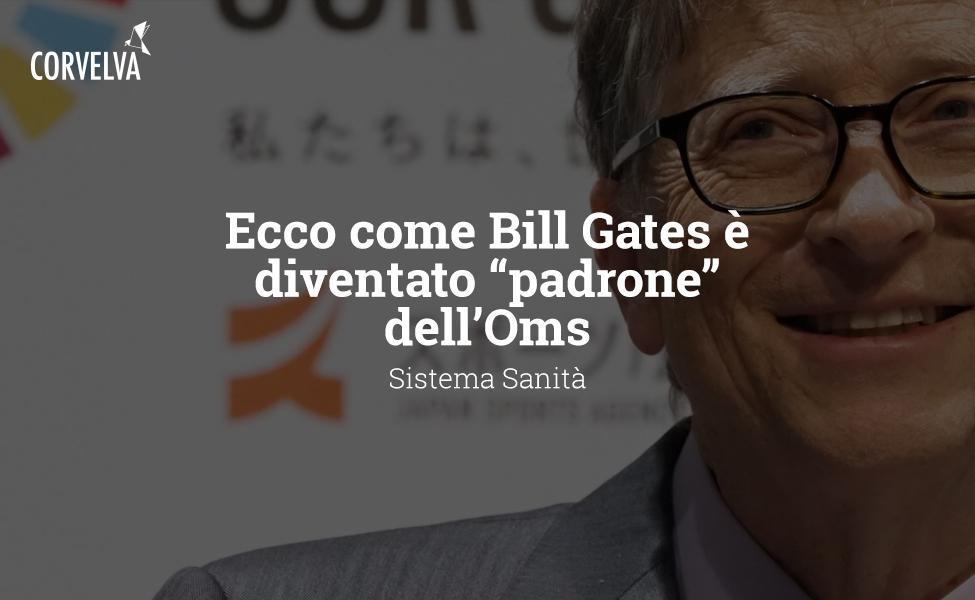 THEWorld Health Organization (WHO) is the most important global authority regarding health, the fight against diseases and the protection of correct lifestyles. Such an important institution should promote a vision of healthcare capable of responding to the collective interest and, above all, of finding solutions to the great scourge constituted by the persistence, in the least developed countries, of outbreaks of potentially devastating epidemics, dall'ebola cholera through measles, in full compliance with the principle of transparency.

Transparency, however, which does not seem to be the rule at WHO. For the 2016-2017 two-year period, it used a budget of almost 4 and a half billion dollars. However, as he writes The truth, 87% of it was financed by contributions from private companies which covered the gradual withdrawal of state funding but were largely tied to the implementation of projects commissioned by the donors themselves.

There is talk of funding earnmarked, or conditional on compliance with a specific agenda. And as the Milanese newspaper writes, citing data from the British Medical Journal, "in 2017 80% of the funds received by the UN agency were earmarked". Among the WHO's financiers, "the lion's share is the creation of Bill Gates: the Bill & Melinda Gates Foundation (which boasts a fortune of 40 billion dollars) allocated almost 444 million dollars to WHO in 2016, of about 221 million of which are tied up and almost 457 million in 2017, of which 213 are tied to specific programs ". It is the second largest single donor after the US government and ahead of the UK.

Bill Gates focused in particular on the administration of vaccines in developing countries, especially in Africa, alongside the WHO commitment as the leading financier of the Gavi Alliance, a public-private partnership issued by its foundation that does not just carry on the meritorious vaccination campaign but aims at the same time to "shape" the immunization markets in the countries involved.

"One wonders how these intertwines affect the WHO, whose work, in terms of vaccinations, has not always been immaculate", he continues The truth. Too many times in the past it has happened that some of the poorest countries on the planet have received offers of health care that ended up binding them to major international pharmaceutical causes with a significant surcharge for the services provided. "Just think of the swine flu case, a fake emergency reported by WHO in June 2009, that is, a few months after a warning from the UN agency, which had prompted many countries to enter into commitments to purchase pandemic vaccines. With a lot of absurd contractual clause: the agreements provided for the responsibility of the buyers in case of side effects. As if one bought an appliance, but for malfunctions, instead of being covered by the guarantee, he had to pay a penalty to the manufacturer. As it happens, those contracts would have become binding if the WHO had announced the outbreak of a pandemic ", which ultimately did not happen.

And important personalities and institutions linked to the world of health have also had the opportunity to express themselves on the limpid role of Bill Gates. First of all in 2013, Doctors without Borders, as reported in Legal immunity, This essay is the result of a collaboration between the surgeon and essayist Pierpaolo Dal Monte and “Il Pedante”, who accused Gavi of imposing artificially inflated prices on the recipient countries for vaccines, which ended up feeding gifts to multinationals like Bayer and Novartis. MSF was followed by Antoine Flahault, director of the Institute of Global Health of the Faculty of Medicine of the University of Geneva, according to which "now WHO is forced to take into account what Gates considers a priority" and which he believes, for example , Gates' claim to tie substantial funds to the expansion of the fight against polio in a phase that sees the disease almost eradicated and new potential epidemics arise is excessive. As it reports Republic, between 2016 and 2017, the WHO earmarked 894,5 million dollars for the fight against polio, a disease now rendered harmless. 10 times more than AIDS prevention, the fourth leading cause of mortality in poor countries ".

Jean-Marie Kindermans, president of the European Agency for Development and Health, said that "if there is a real problem, WHO is about how resources are allocated" and the choice of priorities. By now bound and forced to depend on the logics, different from those of those who should fight for global public health, of the complex of "capitalist philanthropy", as Peter Buffett called it, son of the very wealthy financier (and philanthropist himself) Warren.

As Peter Buffett stated in a famous article for the New York Times written in 2013, philanthropy is becoming a huge business (with 9,4 million employees distributing $ 316 billion in the United States alone), but global inequalities continue to spiral out of control, "and other lives and communities are destroyed by the system that creates immense quantities of wealth for the few ", while the work of organizations like the WHO is tied to the desired of a few private individuals. And the dark side of the "benefit-industrial complex" manifests itself in the context of noble campaigns such as that for vaccinations. Which are diverted in favor of a restricted concentration of companies and see the funds dedicated to them heterodirectly without any principle of efficiency and effectiveness. While the capacity for action of the WHO is sacrificed in the name of the "washing of conscience" of Bill Gates and his wife.