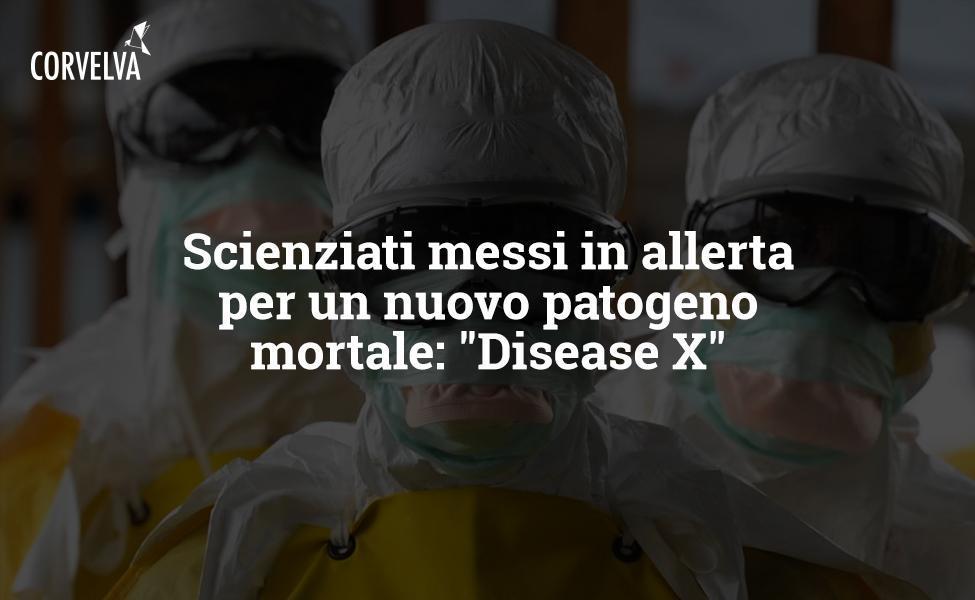 The Geneva-based World Health Organization (WHO) in charge of monitoring and safeguarding world health annually convenes a high-level meeting of expert scientists to list the diseases that pose a serious risk of triggering a serious health emergency. In previous years, the list was confined to known killers such as Lassa fever, which is currently sweeping Nigeria, and Ebola, which killed over 11.000 people in an epidemic in West Africa between 2013 and 2016.

However, a ninth mysterious pathogen was added to the checklist for the first time this year. The WHO statements in a note writes:

"Illness X represents awareness that a serious international epidemic could be caused by a pathogen currently unknown to cause human disease."
"These diseases pose important public health risks and further research and development is needed, including surveillance and diagnostics."

Experts from the WHO panel say that disease X could emerge from a variety of sources and strike at any time.

"History tells us that the next big outbreak is likely to be something we've never seen before"said John-Arne Rottingen, chief executive officer of the Norwegian Research Council and scientific advisor to the WHO committee.

"It may seem strange to add an X"but the point is that Fmake is confident that we prepare and plan flexibly in terms of vaccines and diagnostic tests. We want to see developed" plug and play "platforms that will work for any, or a large number of diseases; systems that will allow us to create countermeasures at speed. "

Advances in genetic editing technology, which make it possible to manipulate or create completely new viruses, mean that disease X could emerge through an accident or an act of terror.

This week's brazen use of nerve gas in Salisbury underscores how far the centennial taboo on the use of chemical and biological weapons has fallen apart. And the creation of horsepox last year in Canada - a close relative of the deadly smallpox virus - has heightened fears among experts that Disease X may emerge from a renegade laboratory.

Mr. Rottingen said that a human disease X is less likely than natural disease, but warned: "Synthetic biology allows the creation of new deadly viruses. It is also the case that where you have a new disease there is no resistance in the population and this means that it can spread rapidly".

More likely, Rottingen said, disease X could be triggered by a zoonotic disease - one that jumps from animals to humans - and then spreads into an epidemic or a pandemic in the same way that the swine flu H1N1 in 2009.
The zoonotic infections that have wreaked havoc in the past include HIV, which is believed to have passed from chimpanzees to humans through the consumption of wild animal meat and killed 35 million people since the early 80s. Ebola is also a zoonosis.

"With the change in the ecosystem and human habitats, there is always the risk that the disease will jump from animals to humans ... It is a natural process and it is vital that we are aware and prepared. It is probably the greatest risk. "

Professor Marion Koopmans, head of the Viroscience department of the Erasmus medical center in Rotterdam and also WHO scientific advisor, said that the frequency with which zoonotic diseases were appearing was becoming much faster.

"The intensity of animal and human contact is becoming much greater as the world develops. This makes the emergence of new diseases more likely, but modern travel and commerce also make their spread much more likely."

WHO has developed a special tool or algorithm to determine which diseases and pathogens should prioritize each year. Diseases considered for inclusion must meet two key criteria: they must have the potential to cause a public health emergency through epidemic spread and adequate countermeasures do not exist or are not available.

Other diseases included in the new 2018 list include Crimean-Congo haemorrhagic fever; MERS and SARS zoonotic respiratory diseases; and Zika, which has been linked to serious birth defects in nearly 30 countries.

MERS, SARS and Zika - all relatively new diseases - would have been classified in the past in disease X.

The list is designed to focus minds and stimulate the development of new tests, vaccines and treatments.

WHO also hopes that it will guide governments around the world to invest in strengthening local health systems. This is important, since it is the primary care systems - local doctors and nurses - that provide the best bet to detect the epidemic of a new disease early and contain it before it can spread.