What do you know about anti-measles monovalents? 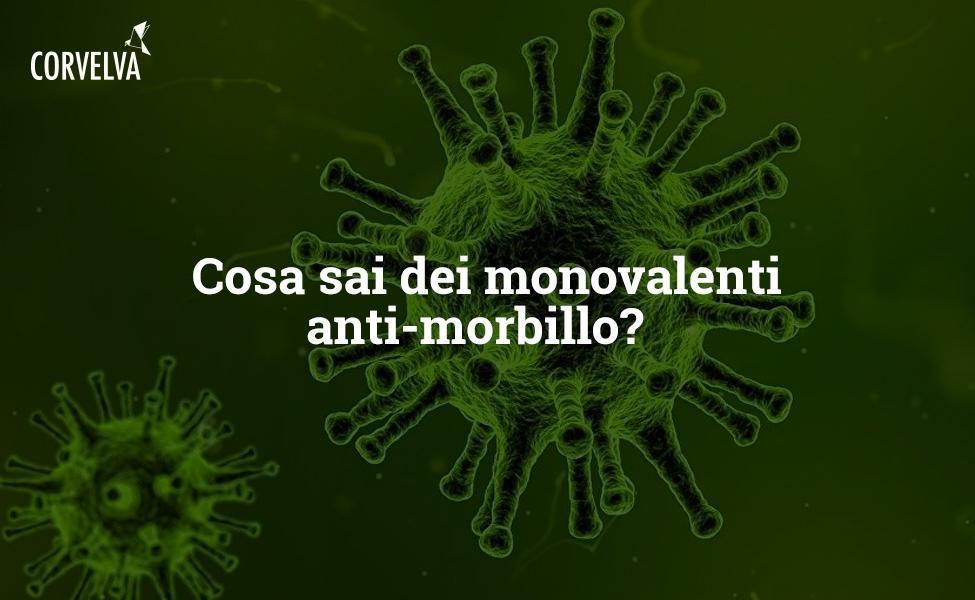 Bern Biotech dates back to the Vaccine Institute in Bern since 1898, the year in which the Lancy Company Institut Vaccinal Suisse and Firma Häfliger, Vogt & Cie merged. Initially their investments focused on vaccines against smallpox, diphtheria, cholera, polio , typhus, meningitis, hepatitis B and the flu. (2)
Bern Biotech was not a small cantonal company, it had branches all over the world, was listed on the stock exchange and at an entrepreneurial level had a very "expansive" attitude. In 2002 it had acquired 80% of the shares of the Dutch company Rhein Biotech. (3) This asset had, at least in 2002, the intent to establish a leading company in the world in the field of vaccines, combining the research capacities of Bern Biotech with the production capacities of Rhein Biotech.

In 2005, the small Dutch company Crucell launched a takeover bid on Bern Biotech, acquiring more than 70% of the shares (4). To be clear, the turnover of Bern Biotech in 2004 was 204,6 million francs against only 34,9 million francs (22,6 million euros) of its buyer Crucell, the classic case of "fish small that eats big fish ". From this merger, according to the statements of the time, it was "to be born the number 1 in the world in the production of vaccines". (5)

Crucell was then acquired by Johnson & Johnson in 2015. Since then, the Bern plant has been known as Janssen Vaccines AG. The Thörishaus factory, however, the former production site of Moraten Bern, was rejected by the purchase and was taken over by the Californian company PaxVax. PaxVax Berna GmbH, that is the production site of Thörishaus, is the current importer and distributor of the “new” vaccine “Measles vaccine live BP” (6), a vaccine produced in India and distributed in Switzerland.

In Italy there is a trace of Moraten Bern until 2000 when with the Official Gazette n.9 of 13-01-2000, decree no. 842 of 9 December 1999 (11) which reported the "modification of the marketing authorization for medicinal products for human use" including Moraten. We have had news that at least until all the 80s and part of the 90s it has been implemented in specific vaccination campaigns. It was found in the local health authorities, therefore even in Italy there were mono-components: it was the business that limited its diffusion and it is clear how the patent holders have voluntarily decided to push on the production of other vaccines. It was distributed first by Berna Biotech Italia Srl (12) and then by Crucell Italy Srl (13) but has always had major problems with adverse reactions, to explain "we steal" the words of Dr. Gava from his book "Pediatric Vaccinations" :
Anaphylactic shock is a generalized undesirable effect that is always possible, but its incidence is very rare. (...) it may be interesting to recall an Italian study (14) initially carried out with the aim of demonstrating that the measles-antiparotitic-antirosolia vaccine ( MPR) caused allergic disorders in predisposed subjects (i.e. allergic to egg proteins) not in itself but because it was produced in cultures of chicken fibroblasts (and therefore containing chicken antigens). To avoid chicken, the authors then injected a vaccine prepared by the Berna (Moraten) company, whose viruses had been grown on human fibroblast cultures, to children of 2 years of age who had been suffering from atopic dermatitis from 3 months of age with positivity of egg and cow's milk skin tests. The result was that within minutes of vaccination, the children developed allergic rhinoconjunctivitis, a severe dyspnoea and cyanosis that fortunately responded to the therapy of the anaphylactic crisis. The authors concluded that the allergic reaction from the MPR vaccine is caused by factors other than egg proteins ... (editor's note: which ones?

-Measles Vaccine live BP
The Measles vaccine live BP, as seen above, is only distributed in Switzerland by PaxVax Bern: the original Indian-produced vaccine is the M-VAC Measles Vaccine (Live) IP (9 - attention original link removed from the Serum Institute of India). It is a vaccine still in use and traceable, on which there is a lot to say: we refer for an in-depth analysis to the metagenomic analyzes (10) that Corvelva also performed on this, buying it regularly in Switzerland in 2017.
There is a mystery about this vaccine: we know, for example, how we read from the data sheet (9), which is produced on MRC-3 cell lines, a line absent from any official database. We also tried to write to Swissmedic through our consultants for more information but without an answer. Some information comes to us from India and it would seem that the MRC-3 cell line is covered by an industrial patent, not registered in the databases. However, we have seen that the "Measles vaccine live BP" vaccine shows 6 mutations in the genome of the measles virus Edmonston Zagreb. These data do not allow to guarantee neither the safety nor the immunization capacity of the vaccine.
This vaccine is also purchased from Italy, to resort to single anti-measles administration at the suggestion of some doctors. But not only the composition is not clear, on the contrary, the history of this vaccine is not absolutely clear, but it is a vaccine approved by the Swiss regulatory agency, not EMA and certainly not AIFA, any adverse reaction would have no compensation, also difficult to report any adverse reaction. To recommend this vaccine in Italy or to prescribe it, is in our opinion risky.

A note: PaxVax, once purchased the Bern Biotech production plant, decided to invest in one of their workhorses, the antitific Vivotif. Here too, fate wanted, that like Corvelva we went to analyze it: 156 the mutations found, are not few, not to mention an 8% of human DNA that has no reason to be present, but this is a separate chapter.