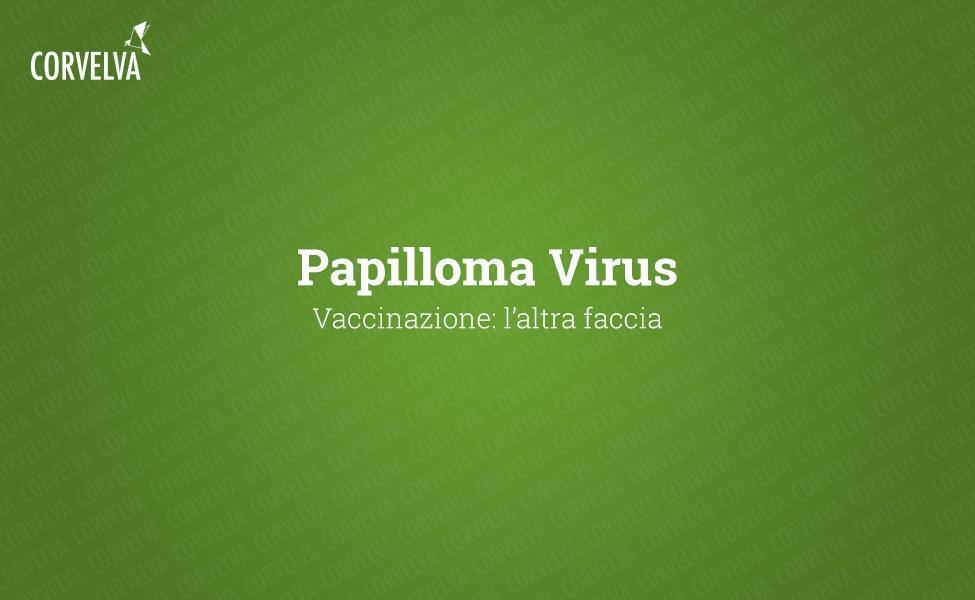 two vaccines are available against HPV: both are targeted against HPV types 16 and 18 (Cervarix; GlaxoSmithKline) and one of the vaccines also against types 6 and 11 (Gardasil, Sanofi; Merck in America).
There are over 100 HPV subtypes, but types 16 and 18 are the most oncogenic viral strains, present in about 70% of cervical cancers worldwide.

25 are the oncological viral HPV subtypes, the vaccine targets only two types.

Most HPV infections are transient and asymptomatic and do not cause clinical problems; 70% of HPV infections they resolve spontaneously within a year and about 90% within 2 years; the average duration of a new infection is 8 months.

Chronic infection with high-risk types of HPV is the most important risk factor for cervical cancer development:
- A small percentage of the number of women with chronic infection develop cervical cancer (1-2%): is it necessary to vaccinate all girls for this?
- It is the body's inability to spontaneously resolve the infection, the real cause of the onset of cancer and not the infection with the virus, even if of oncogenic strains; the virus multiplies when it finds the right soil to do it.
- HPV infection is the consequence of incorrect sexual education since adolescence and it is this that must first of all be corrected (the highest percentage of HPV infection occurs in girls with early sexual activity and with many partners)

A total of 40323 participants were enrolled in 6 clinical trials; the age of women varies between 15 and 25 years with a number of partners between 2 and 6 and not affected by HPV; from an ethnic point of view the women were mainly white, but Hispanic, Asian and black women were also included.

The definition of persistent infection was based on a persistence criterion after 4-6 months, (except in a study where it is assessed at 12 months), which was considered insufficient to distinguish between persistent and healing lesions, but sufficient only to justify further efficacy studies.
Healing takes place in two years.

- Based on this definition, a greater number of women with persistent infection were found in the control group than the vaccinated women and this is proof of the efficacy of the vaccine; it has not been verified whether infected women developed precancerous lesions or not, or whether they recovered spontaneously after 12 months.
- There was no evidence that prophylactic vaccination reduces the incidence and mortality from cervical cancer

From the methodological point of view, an important limitation was found that reduces the quality of the studies: about half of the participants withdrew from the study and over 35% were excluded from the analyzes (perhaps they were sick?)
despite this the results on the efficacy of the vaccine have been defined robust.

Adverse reactions:
as can be seen from the table, the placebo contained aluminum and in one case the hepatitis A vaccine:

no unvaccinated controls were used

In most studies, participants were asked to keep a diary for 7-14 days after vaccination
(after these days they decided that the vaccine no longer matters if there are problems).

The adverse reactions encountered are the usual: injection site reactions, test pain, fatigue, myalgia; in 15% of women there were intestinal problems, itching, fever.
In the Harper study with a follow-up of 47.7 months, cases of chronic disease emerged: 3% in the vaccinated group and 5% in the control group; statistical analysis shows that the incidence of adverse reactions was similar between the two groups.

The National Vaccine Information Center (NVIC) is an American national nonprofit organization dedicated to preventing damage and deaths from vaccine, through public information and defending informed consent (www.nvic.org).
The NVIC has reported on its website and to the public attention various analyzes of reports of serious health problems following vaccination with Gardasil, registered in the VAERS (Vaccine Adverse Event Reporting System)
The VAERS is a passive surveillance system and depends on the voluntary reporting of adverse reactions following vaccination, although a 1986 provision in the National Childhood Vaccine Injury Act obliges health care professionals to report adverse reactions to vaccines.
It has been estimated that less than 10%, probably between 1 and 4%, of adverse reactions that occur after prescribing a drug or using a vaccine are reported in government adverse reaction reporting systems.
The latest analysis of the data reported is from May 31, 2007, about a year after the introduction on the market of Gardasil (June 29, 2006) and the following emerged:
2.227 reports of adverse reactions were registered in the VAERS; of these, 13 are suspected or confirmed reports of Guillan-Barre Syndrome (the first case was reported on July 14, 2006, 2 weeks after the first vaccination) and two new cases were added in June 2007.
Syncope and vasovagal syncope (fainting with temporary loss of consciousness and posture) have been reported 239 times and 106 reports are associated with head injuries, fractures and subarachnoid and subdural hematomas, due to falls during fainting.
Based on the Judicial Watch analysis, www.judicialwatch.org, a group of public lawyers who investigate and prosecute for corruption at government level, the deaths due to the administration of the vaccine are 8.
Of the 42 women who received the vaccine in pregnancy, 18 had adverse reactions ranging from spontaneous abortion to congenital malformations of the fetus.
77% of the reported adverse reactions are typical side effects of vaccinations, but serious reactions such as: paralysis, Bells palsy are also included; Guillain-Barre syndrome (GBS) and convulsions.
About 10% of the reports were caused by avoidable medical errors.
On February 21, 2007, NVIC expressed concern about the potential increased risk of adverse reactions following the simultaneous administration of Gardasil with other vaccines, for which safety studies performed prior to marketing are lacking (Merk reports the safety study only Gardasil-hepatitis B vaccine association)
Up to 31 May 2007, an additional 135 reports have been reported following the co-administration of Gardasil and Menactra (anti-meningococcal vaccine); the analysis of the data showed that the increase in risk of developing adverse reactions compared to the administration of only Gardasil was 12 times overall and in particular, the risk of respiratory problems increased by 114%, heart problems by 118%, neuromuscular and coordination problems of 234%; seizures and central nervous system problems increased by 301%, injuries from falls following fainting by 674% and GBS by 1130%.
The accepted scientific standards indicate that these data are statistically significant and cannot be excluded by coincidence, and that therefore the increased risk of developing GBS following the co-administration of Gardasil and Menactra is significant.

On February 21, 2007, Merck canceled her program to make HPV vaccination mandatory following opposition from the American Academy of Pediatrics and the US Centers for Disease Control and Prevention in Atlanta, due to a lack of sufficient data. safety and efficacy.