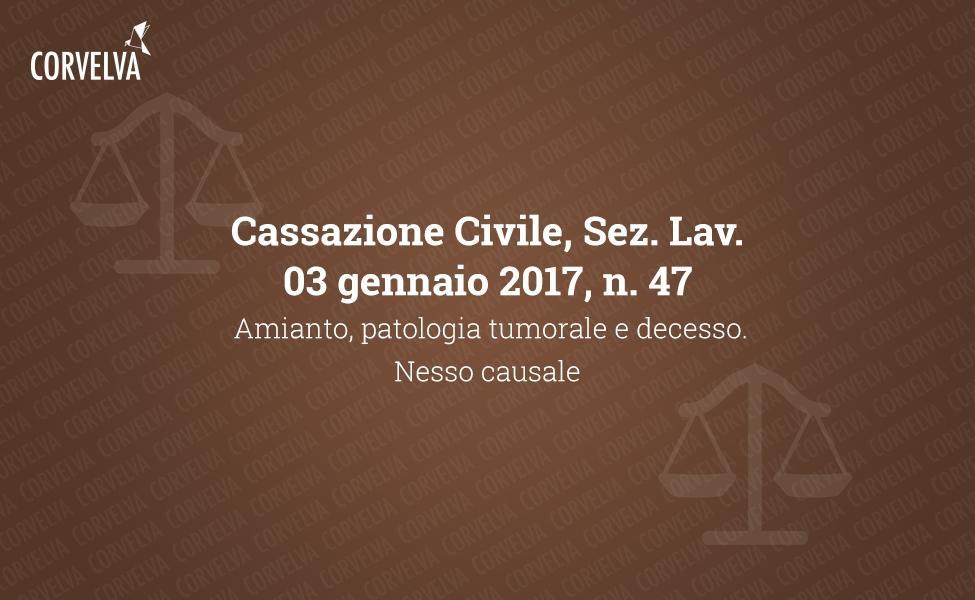 With an appeal to the Court of Latina BF and QM, in their own right and QQ heirs, already a worker of GI spa, they acted against the employer company to ascertain its responsibility for the tumor pathology that had determined the death of the worker and for the condemnation of damages, patrimonial and non-patrimonial, own law and hereditary law.
The Labor Judge - with sentence of 9.2.2003 (nr. 2882/03) - rejected the application for the deemed limitation of the rights activated.
The Court of Appeal of Rome - with judgment of 30.9.2009-26.1.2010 (nr. 6831/2009) - rejected the main appeal proposed by the original recurring parties as well as the incidental appeal of the company GI spa.
The Territorial Court stated that it had carried out medical-legal advice for the identification:
- on the one hand, the date on which the prescription begins, to be fixed at the time of onset of the disease;
- on the other, the existence of the etiological link between work activity and illness.
On the first point, the thesis of the applicants, according to which it had to be considered for the initial calculation of the prescription for the year 1995, the year of the onset of secondary tumor pathologies, had to be rejected, as the advice carried out and the health documentation in the records attested that these were not autonomous pathologies but an aggravation of the original pathology, diagnosed since 1986.
However, for damages caused by the heirs, the dies a quo of the prescription coincided with the date of death of the deceased, 22.4.1998; therefore, the five-year limitation period had not expired on the date of notification of the appeal, in October 2002.
From this point of view, the ascertainment of the causal link between the work activity and the pathology was arranged, which had to be guided by the principle of equivalence of the causes enshrined in article 41 of the criminal code.
The technical consultant had concluded that the death of Q. was attributable to neoplastic disease (leiomyosarcoma) of the left femoral vein, with lung, liver and local progression but that for this tumor form there was no certainty on the relationship of causal derivation with respect to exposure to substances noxious certain.
The consultant had also assessed the elements suggested by the party consultant to affirm the work origin of the pathology and in particular the possible causal action of carbon black or black carbon based on experimental research conducted on animals with subcutaneous administration; had highlighted the automatic non-traceability of the same studies to humans and, in any case, the improbability of subcutaneous penetration of the offending agent, for the protection provided by the skin and work clothes. Scientific studies had also been examined and the outcome of the CTU had concluded by confining to the area of ​​mere "possibility" the hypothesis of a causal relationship between work activity and the pathology determining death.
The Court of Merit rejected the further questions raised regarding the consultancy both of a procedural order - (for failure to comply with the filing deadline, the contradictory having been carried out anyway) - and, from a merit profile, for the failure to consider asbestos, being a profile assessed by the ctu and considered not decisive in identifying the causal link.
Finally, even in the penal center, after having carried out an in-depth analysis of the working environment, the experts included Q. in the group of cases for which it was not possible to prove a correlation between the working activity and the pathology.
The incidental appeal was to be rejected both in terms of costs and to the alleged functional incompetence of the labor judge.
BF and QM use the cassation of the sentence, articulating five reasons.
The GI spa company resists with a counter-appeal.
The parties filed a brief.

The Court dismisses the appeal. He sentenced the applicant to pay the costs, which he paid in € 100 for disbursements and € 10.000 for professional fees, plus 15% overheads and statutory accessories.
So decided In Rome, 20.9.2016