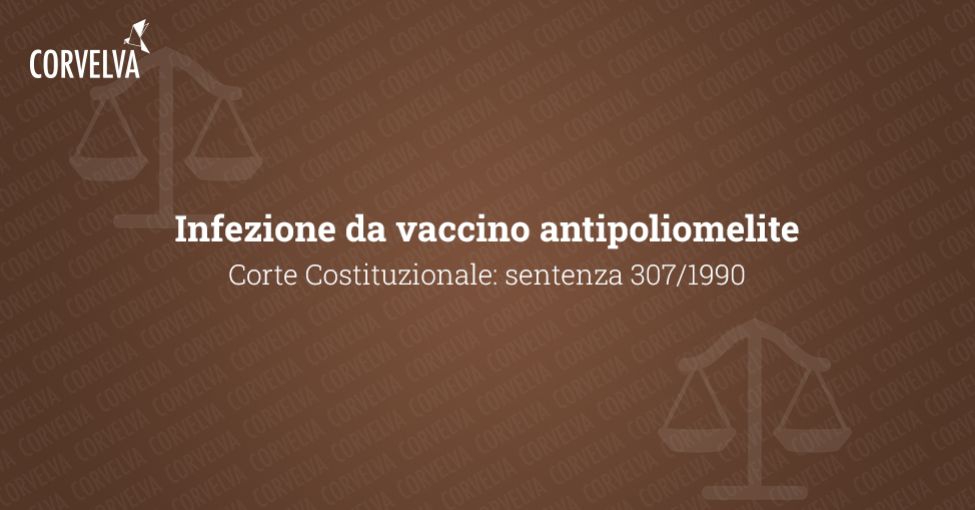 in the constitutional legitimacy judgment of articles 1, 2 and 3 of the law 4 February 1966, n. 51 (Obligation of polio vaccination), promoted by order issued on 23 February 1989 by the Court of Milan in the civil proceeding between Oprandi Iside and the Ministry of Health, registered under no. 461 of the register of ordinances 1989 and published in the Official Gazette of the Republic no. 42 first special series of the year 1989;

Hearing in the council chamber of 31 January 1990 the judge rapporteur Aldo Corasaniti;

1. - Oprandi Iside brought the Ministry of Health before the Court of Milan to obtain compensation for the damage caused by polio contracted through contact with her son Davide, who had undergone mandatory polio vaccination, complaining that the health bodies, on that occasion, did not 'they had informed of the danger nor instructed on particular precautions to be observed in contact with the feces and mucus of the vaccinated child, whom she personally cared for.

Having carried out technical advice - which confirmed the etiology of the morbid form contracted by the plaintiff -, the Court, by order issued on 23 February 1989, raised the question of constitutional legitimacy, with reference to art. 32 of the Constitution, of the law 4 February 1966 n. 51 (Obligatory nature of polio vaccination) with particular regard to arts. 1, 2 and 3, as they do not provide for a system of compensation and / or precautionary and / or welfare provisions for damage to physical integrity resulting from vaccination.

The referring judge observes that in the case in question it would not be recognizable responsibility of the Public Administration pursuant to art. 2043 of the Italian Civil Code, not even from the point of view of the failure to adopt precautionary systems centered on widespread communications - difficult to reconcile on the other hand with the purposes of compulsory vaccination, since the risk of contagion is minimal in percentage terms.

Therefore, the liability of an unlawful fact excluded, the Court observes that it is not even configurable, in this case, a liability of the PA for legitimate acts, since the provision of compensation for the individual's subjective right, sacrificed in the pursuit of the public interest, is exceptional and mandatory, and is not contemplated by any specific provision in reference to the injury to physical integrity, as is the case for the infringement of the right to property, pursuant to art. 46 of the law of 25 June 1865 n. 2359.

Furthermore, the referring court observes that art. 32 of the Constitution protects health not only as an interest of the community, but also and above all as a primary and absolute right of the individual (Constitutional Court n. to ensure free treatment for the indigent, also through solidarity intervention (Constitutional Court n. 88/1979). Where, therefore, there is a complete lack of such provisions, nor is it possible to resort to alternative forms of compensation, the constitutional guarantee of protection of the physical integrity of the person is nullified. And in particular this happens in the case in question, in which this fundamental right of the individual can be sacrificed as a result of the exercise by the State of legitimate activity in favor of the community (compulsory vaccination treatment), without providing for an equivalent compensation, or other equivalent proportionate to the sacrifice that may have occurred to the individual in the fulfillment of an obligation imposed in the interest of public health. In this regard, in fact, no provision in this sense is contained in law no. 202 of 1981.

2. - There was no constitution of private parties nor did the President of the Council of Ministers explain the intervention.

1. - The referral order has questioned the constitutional legitimacy, with reference to art. 32 of the Constitution, of the law 4 February 1966, n. 51 (Obligatory nature of polio vaccination) with particular regard to arts. 1, 2 and 3.
The legislation is challenged because - while it imposes the obligation of polio vaccination for children within the first year of age, considering the person exercising parental authority (today parental authority) or the protection of the child (or the director of the public assistance institute where the child is hospitalized, or the person to whom the child has been entrusted by a public assistance institution), and assigning to the Ministry of Health the task of providing for its own expenses for the purchase and distribution of the vaccine - "does not provide for a system of compensation and / or precautionary and / or welfare provisions for vaccination accidents".

In the course of a civil trial brought against the Minister of Health in relation to the damage suffered by a mother for having contracted polio, with persistent spinal paralysis, as she was transmitted by contagion from her son, subjected to mandatory polio vaccination, the judge a quo, considering that no extremes of responsibility appeared to have recourse pursuant to art. 2043 cc, has proposed the possible contrast of the alleged lack of provision of remedies such as those indicated above for the occurrence of injuries deriving from a mandatory health treatment, by the rule that introduces it, with the principle, expressed in art. 32 of the Constitution, of the full protection of the physical integrity of the individual.

2. - The question is well founded.
Polio vaccination for children within the first year of life, as regulated by the denounced rule, which requires parents, guardians or carers to do so, imposing a fine on the obliged for the case of non-compliance, constitutes one of those mandatory health treatments referred to in art. 32 of the Constitution.

This precept in the first paragraph defines health as "fundamental right of the individual and collective interest"; in the second paragraph, it submits the said treatments subject to the law and without prejudice, also with respect to the law, to the limits imposed by respect for the human person.

From this it follows that the law imposing a health treatment is not incompatible with art. 32 of the Constitution if the treatment is aimed not only at improving or preserving the state of health of those subjected to it, but also at preserving the state of health of others, since it is precisely this further purpose, relating to health as an interest of the community, to justify the compression of that self-determination of man which is inherent in everyone's right to health as a fundamental right.

But above all it is inferred that a medical treatment can be imposed only in the provision that it does not negatively affect the state of health of the person subjected to it, except for those consequences only, which, due to their temporariness and insignificance, appear normal. any health intervention, and therefore tolerable.

With reference, however, to the hypothesis of further damage to the health of the subject subjected to compulsory treatment - including the disease contracted by contagion caused by prophylactic vaccination - the constitutional significance of health as an interest of the community is not alone sufficient to justify the measure sanitary. This observation requires that in the name of it, and therefore of solidarity with others, each one can be obliged, thus remaining legitimately limited to his / her self-determination, to a given health treatment, even if this involves a specific risk, but does not postulate the sacrifice of health of each to protect the health of others. A correct balance between the two aforementioned dimensions of the value of health - and the same spirit of solidarity (obviously to be considered reciprocal) between the individual and the community that is at the basis of the imposition of health treatment - implies the recognition, for the case, that the risk come true, of a further protection in favor of the passive subject of the treatment. In particular, the minimal content of the right to health guaranteed to him would end up being sacrificed, if he were not in any case assured, at the expense of the community, and for it of the State that provides the compulsory treatment, the remedy of a fair restitution of the damage suffered.

And likewise it must be considered for the damage - from disease transmitted by contagion by the person subjected to compulsory medical treatment or in any case related to this - reported by the persons who have provided direct personal assistance to the former due to his physical non self-sufficiency (persons also involved in the compulsory treatment which, from an objective point of view, must be considered as a unit in all its phases and in all its immediate consequences).

If this is the case, the legislative imposition of the obligation of medical treatment in question must be declared constitutionally illegitimate as it does not provide for an indemnity such as the one indicated above.

3. - Obviously, the declaration of illegitimacy does not concern the hypothesis that the further damage is attributable to negligent behavior relating to the concrete measures of implementation of the aforementioned rule or even to the actual execution of the treatment itself. The rule of law that provides for the treatment does not meet, that is, a ruling of constitutional illegitimacy due to the failure to provide for the compensation protection in reference to the further damage that results in iniuria datum. In this case, the general rules on civil liability pursuant to art. 2043 cc

The jurisprudence of this Court is in fact very firm in believing that any impairment of health, expressly defined as (content of a) fundamental human right, implies the compensation protection pursuant to art. 2043 cc And clarified how this protection is independent of the recurrence of a pecuniary damage when, as in the case, the injury affects the content of a fundamental right (sentt. Nos. 88 of 1979 and 184 of 1986).

It is hardly necessary to note, then, that the aforementioned compensation remedy is applied whenever the concrete forms of implementation of the law imposing a medical treatment or material execution of said treatment are not accompanied by precautions or conducted in the manner that the state of scientific knowledge and art prescribe in relation to its nature. And these include the communication to the person who is subjected to it, or to the people who are required to make decisions for him and / or to assist him, of adequate information about the risks of injury (or, in the case of anti-epidemiological treatments, of contagion) , as well as the particular precautions, which, always according to the state of scientific knowledge, are respectively verifiable and adoptable.

But civil liability operates on the level of protecting the health of each person against the offense (by anyone) on the basis of the subjective titles of indictment and with the full compensatory effects provided for by the aforementioned art. 2043 cc

With this declaration of constitutional illegitimacy, on the other hand, a remedy is introduced which is intended to operate in relation to the damage attributable under the objective aspect to the compulsory medical treatment and within the limits of an equitable settlement that takes into account all the components of the damage itself. Justified remedy - repeated - by the correct balancing of the values ​​called into question by art. 32 of the Constitution in relation to the same reasons of solidarity in the relationships between each person and the community, which legitimize the imposition of medical treatment.

Declares the constitutional illegitimacy of the law 4 February 1966, n. 51 (Obligatory nature of polio vaccination) in the part in which it does not provide, at the expense of the State, a fair compensation for the case of resulting damage, outside the hypothesis referred to in art. 2043 cc, from contagion or other appreciable disease causally attributable to the mandatory polio vaccination, reported by the vaccinated child or by another person due to direct personal assistance provided to the former.

So decided in Rome, in the seat of the Constitutional Court, Palazzo della Consulta, on June 14, 1990.

The President: SAJA
The editor: CORASANITI
The Chancellor: MINELLI

Filed in the registry on 22 June 1990.
The director of the chancery: MINELLI