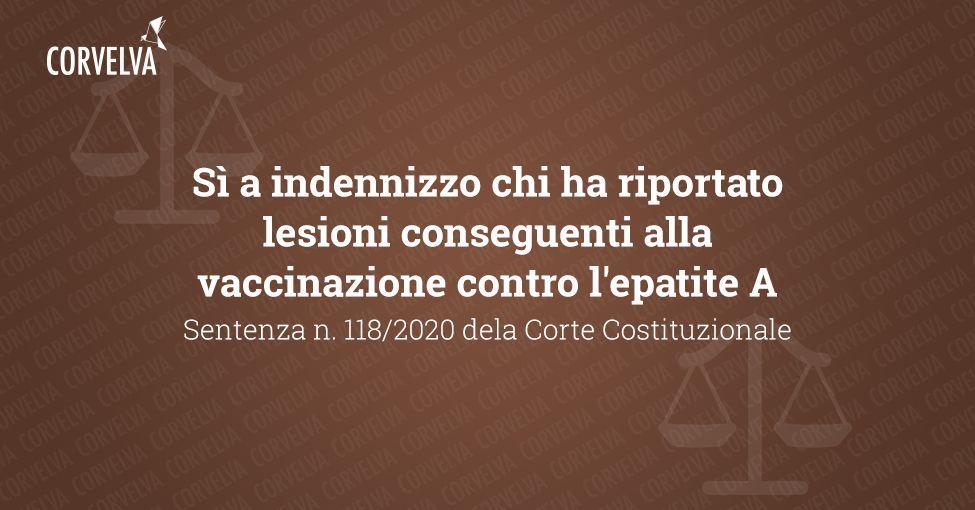 Anyone who has suffered injuries as a result of the right to compensation is entitled to compensation vaccination against hepatitis A. The Constitutional Court, in fact, with a sentence filed on June 23, 2020, declared the constitutional illegitimacy of article 1, paragraph 1, of law 210/1992 - inherent "compensation in favor of subjects damaged by irreversible complications due to mandatory vaccinations, transfusions and administration of blood products "- in the part in which" it does not provide for the right to compensation, under the conditions and in the ways established by the same law, in favor of anyone who has suffered injuries or infirmities, from which it is derived permanent impairment of psycho-physical integrity, due to vaccination against hepatitis A virus infection ".

The constitutional judges therefore considered the question raised by the labor section of the Supreme Court to be well founded: "The reason underlying the individual's right to compensation - reads the sentence filed today, in which previous rulings are also mentioned - does not lie in the fact that these has undergone compulsory treatment: it rests, rather, on the necessary fulfillment, which is required of the community, of a duty of solidarity, where the negative consequences for psycho-physical integrity derive from health treatment (compulsory or recommended that ) carried out in the interest of the community itself, as well as in the individual ".

For this reason, observes the Consulta, "the failure to provide for the right to compensation in the event of irreversible diseases deriving from certain recommended vaccinations results in an infringement of articles 2, 3 and 32 of the Constitution: because the requirements of solidarity are constitutionally foreseen, as well as the protection of the right to health of the individual, to require that the community to bear the burden of prejudice suffered by them, while it would be unfair to allow the injured individual to bear the cost of the benefit, even collectively ".