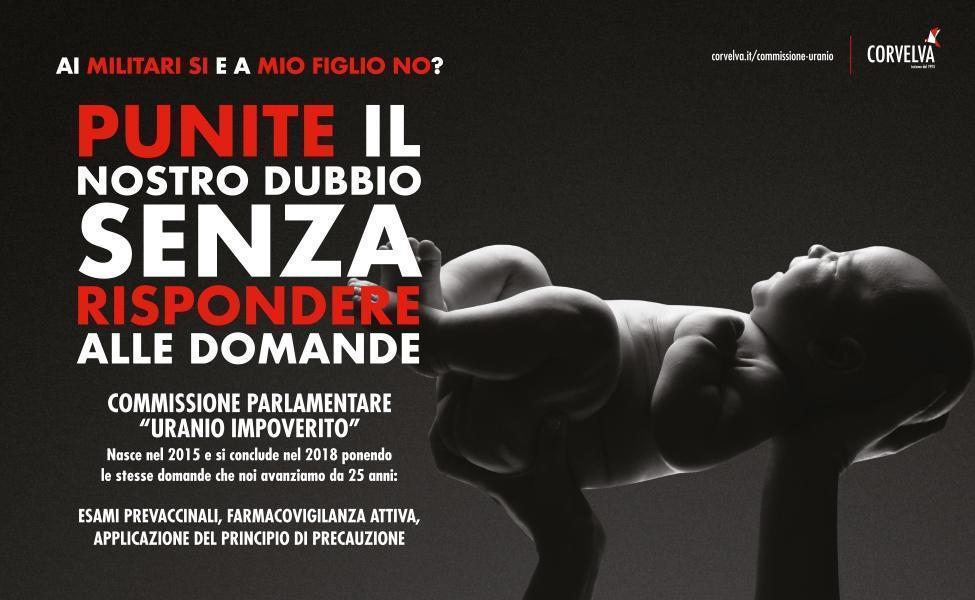 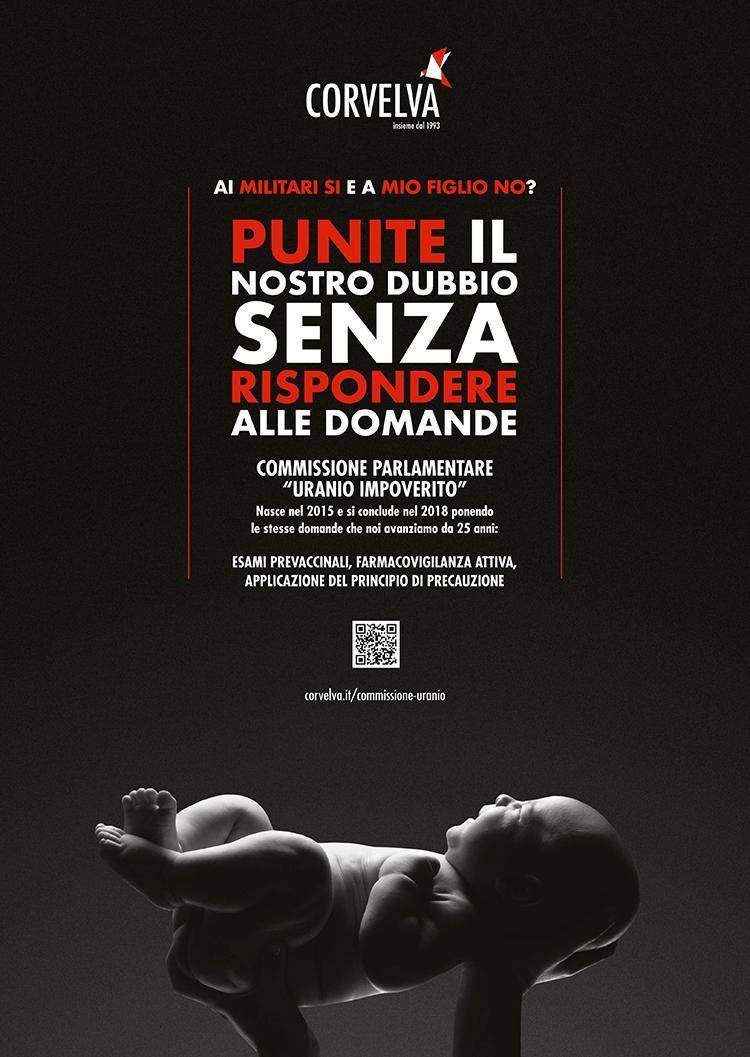 A necessary premise must be made: the Parliamentary Commission of Inquiry "Depleted Uranium" was not born on the particular sensitivity of the Italian rulers but was born in 2015 following a large number of cases of Italian soldiers sick with autoimmune or neoplastic or deceased diseases.
Among them we mention only one of the 2800 cases in which the Ministry of Defense and Health were involved in causing injuries or death from the too close and massive mandatory administration of vaccines.

Francesco Rinaldelli, major corporal of the Italian Army, Alpine of Potenza Picena. Died in 2008 at the age of 25. (Judgment of the Administrative Court of Friuli Venezia-Giulia) 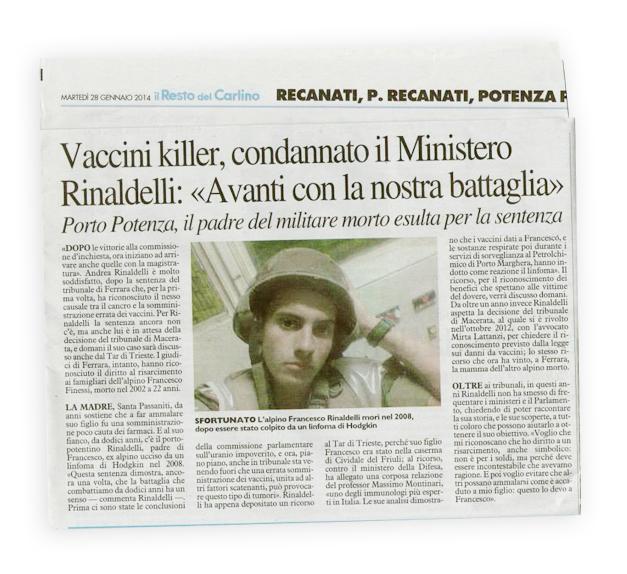 Some of the questions that we have been asking for 25 years and that have finally had a parliamentary answer:

(Link to the Final Report)

Are vaccines safe for our children?

The safety of vaccinations turns out to be a necessary and fundamental certainty for anyone who wants to vaccinate or vaccinate their child, especially in situations of obligation. There are no studies confirming the safety of vaccines1.
The Commission has identified several issues that seriously question the effective safety of any vaccine approved for military and civil use (they are the same vaccines) in the Italian territory, already only if individually inoculated2.
The safety of vaccines administered simultaneously or without waiting for the due disposal times of the adjuvants, excipients and contaminants, causes an exponential increase in the risks related to vaccination3-4-5. The safety of multiple vaccines, contrary to what has been claimed to date by the "medical-political" class, has been questioned by the commission, even going so far as to ask to adopt only monovalent vaccines6-7.
Any form of risk linked to compulsory medical practice, particularly if carried out on healthy children, cannot and must not be hidden, concealed or minimized, as is the practice followed daily by the State, Institutions and indoctrinated Medical Staff.

Are there pre-vaccination tests to prevent adverse reactions?

Is there any way to prevent a serious and moderate adverse reaction in a healthy child?8-9-10  To date, negative responses have been rained down supported by nothing and arbitrarily decided11-12-13 by those who wanted at all costs to put our families in a critical and uncomfortable situation, in several respects. The Commission noted the importance of clinical pre-vaccination tests to the point of suggesting exclusion from enrollment14 of the subjects who do not pass these tests, underlining the insufficiency of the medical history form and of the informed consent completed by the military during vaccination administration, believing that the mere compilation of the form cannot be considered as a substitute for the health checks required by the manufacturing companies of vaccines.
Consequently, it is reasonable to think that a 3-month history of a baby, based mainly on the possible familiarity of autoimmune diseases, immune depressions or any pathology that could be a risk factor for vaccination, is nowhere near enough15.
But, basically, the pre-vaccination tests suggested by the pharmaceutical companies, for our government and for most of its representatives, do not exist.

Are there serious adverse reactions to vaccines?

The commission notes what we've all been screaming for years. The most honest answer that institutions should give is: "we don't know because we don't monitor"16-17-18 and not only "we hinder spontaneous reporting in every way".
There are too many cases of families devastated by a serious adverse event following vaccination19-20-21 and not everyone has recognized the damage to their children. For these families it is not only a venial economic recognition, albeit useful in various situations, but the recognition of truth and justice; the admission of guilt by a medical and political class that denies the evidence.
Many of these families had not been adequately informed about the risk / benefit of vaccination practice by their pediatrician or even by the vaccinating doctor. The information is retrieved on the Internet and in books, of course! But it is a responsibility of the Order of Doctors and a specific task of any Doctor who defines himself as such, to make sure that his patient is at least aware of the risks he runs by undergoing a medical practice.
The issue is far more serious than you think. The Commission has highlighted the tendency to monitor adverse reactions within a very short period after vaccination22, associating with this reason the higher frequency of immediate adverse reactions compared to longer-term pathologies that are thus rare, declaring in no uncertain terms that non-acute, but not for this reason not serious, adverse reactions are significantly underestimated.
It is not acceptable that in a state that defines itself as civilized human rights are denied. Not so much for an obligation that harms the freedom of the individual, as for the lack of recognition and the lack of support of people who have developed serious illnesses following a strongly recommended and, today, again mandatory practice.

Does the number of vaccines administered affect the health of our children?

They imposed an obligation on us at least 9 vaccines to have our children admitted to kindergartens and nursery schools, stressing that the immunized person fulfills the vaccination obligation ..., normally and in any case within the limits of the availability of the National Health Service, with monocomponent or combined vaccines in which the antigen for the infectious disease for which immunization exists is absent.
Leaving aside the mockery that vaccines in one-component formulation are not available and in combined formulation they do not always exclude the disease for which natural immunization has already occurred, we bring to light the damage.
In recent months the mass media have told us and repeated that there is no risk if a naturally immunized child is vaccinated for that same disease. The Commission brutally refutes this claim by stating that:
"... to pursue the safety of the administration of vaccines, with a view to the elimination or at least of the maximum reduction of the risk of negative effects following the use of vaccines in multiple doses, recommends the use of single-dose vaccines, given the concrete possibility that the military, given adulthood, is already immunized against some antigens contained in vaccines in multiple doses. "
"Particular attention is still recommended to the pre-vaccination history and the tests deemed necessary in doubtful cases or for any previous immunization."
For our children, not only is there no possibility of finding single-component vaccines, but there is also no possibility of having antibody tests prescribed to check for previous immunization.

Can the vaccine cause autism?

Given the sensitive issue, we believe it is correct to simply report what was written by the Commission and leave the conclusions to the individual:
Scientific studies have shown the neurotoxic effects of Aluminum27 in much lower quantities than those listed above. In this regard, please refer to the following study published in the Journal of Toxicol 2014; 2014: 491316. Doi: 10.1155 / 2014/491316. Epub 2014 Oct 2, entitled "Aluminum-induced entropy in biological systems: implications for neurological disease" by Shaw CA to others. The study also shows that: “Aluminum forms toxic complexes with other elements, such as fluorine, and negatively interacts with mercury, lead and glyphosate. Al has a negative impact on the central nervous system in all the species that have been studied, including humans. AL has a negative impact on the central nervous system in all species that have been studied, including humans. " Furthermore, in accordance with the findings of the commission in reading the dossiers provided by the pharmaceutical companies, it clarifies that humans are increasingly exposed to aluminum from various sources including vaccines. We also refer to the study published in the Journal of Trace Elements in Medicine and Biology at Volume 46, in March 2018, on pages 76-82, entitled: "Aluminum in brain tissue in autism" by Matthew Molda, Dorcas Umar, Andrew Kingc, Christopher Exley28, concerning the presence of aluminum in the brain tissue of children suffering from neurological diseases. The study found that "... The aluminum content in brain tissue in autistic subjects was consistently high. The mean aluminum content (standard deviation) on all 5 individuals for each lobe was 3,82 (5,42), 2,30 (2,00), 2,79 (4,05) and 3,82 ( 5,17) μg / g dry weight for the occipital, frontal, temporal and parietal lobes respectively. These are some of the highest values ​​for aluminum in human brain tissue [so far] recorded and one has to wonder why, for example, the aluminum content of the occipital lobe of a 15-year-old child would be 8,74 (11,59) μg / g dry weight .... ". Although the Commission is aware of the fact that adverse reactions differ between adults and children, it considers it appropriate not to underestimate the overall amount of aluminum administered to the military in the entire vaccine prophylaxis, since in adults the greatest degree of development of the immune and nervous systems at the time of vaccination, and the possible forms of physiological autoimmunity, they can favor the induction of lymphoproliferative type reactions and autoimmune diseases, as shown by the list of undesirable effects, adverse reactions and contraindications, contained in the technical data sheets prepared by the pharmaceutical companies.
Since many of the vaccines used are produced with cultures of cells and animal (chicken embryos) or human (fetal tissues, cell lines) and tissues, this contamination poses serious risks to human health, because it could be responsible for autoimmune reactions against DNA human. In particular, it is appropriate to recall the study from the thiole "Epidemiologic and Molecular Relationship Between Vaccine Manufacture and Autism Spectrum Disorder Prevalence" by Deisher TA, et al. Issues Law Med. 2015, in whose conclusions we read: “Vaccines produced in human fetal cell lines contain unacceptable levels of fetal DNA fragment contaminants. The human genome naturally contains regions susceptible to double strand break formation and insertional DNA mutagenesis. The "Wakefield shock" created a natural experiment that can demonstrate a causal relationship between vaccines manufactured from fetal cell lines and the prevalence of ASD "36. The Commission notes that the study is the result of laboratory analysis carried out on a vaccine included in the list of documentation delivered by AIFA, but in which no mention is made of this component.

Among the various pages of the report, which deserves the complete reading of Annex 1, there are concealments, bad medical practice, total or partial lack of common sense in vaccination practice. The thing that leaves most dismayed is the total absence of communication from the Mass Media, except in very rare cases, of the publication of the final report and its content, effectively omitting the part related to vaccinations.

The questions that Corvelva and the Venetian parents have been asking for 25 years are the same ones that the members of the Commission have asked themselves. We hope that we will not have to wait another 25 years to see the PRECAUTIONARY PRINCIPLE applied.