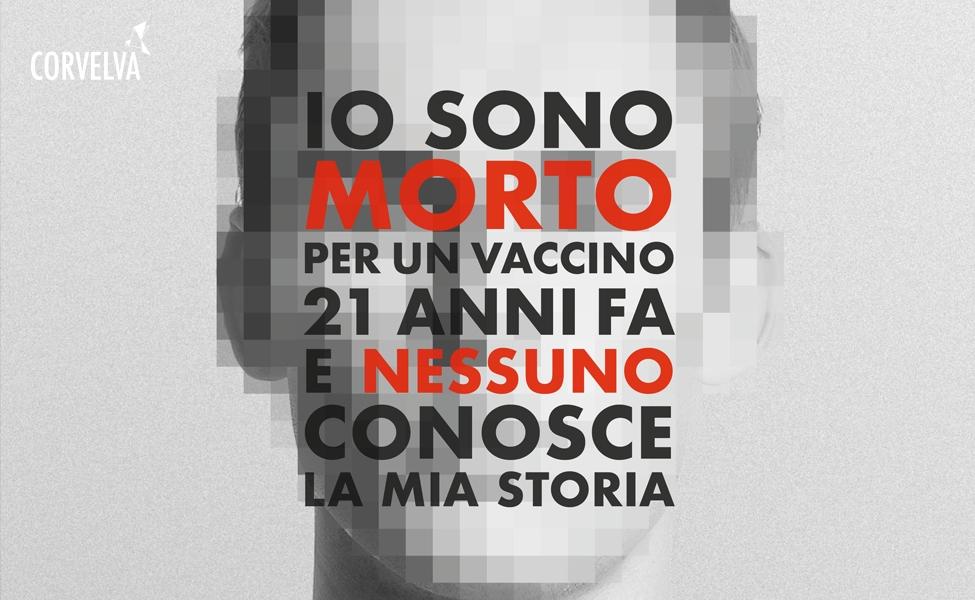 #I DO NOT FORGET 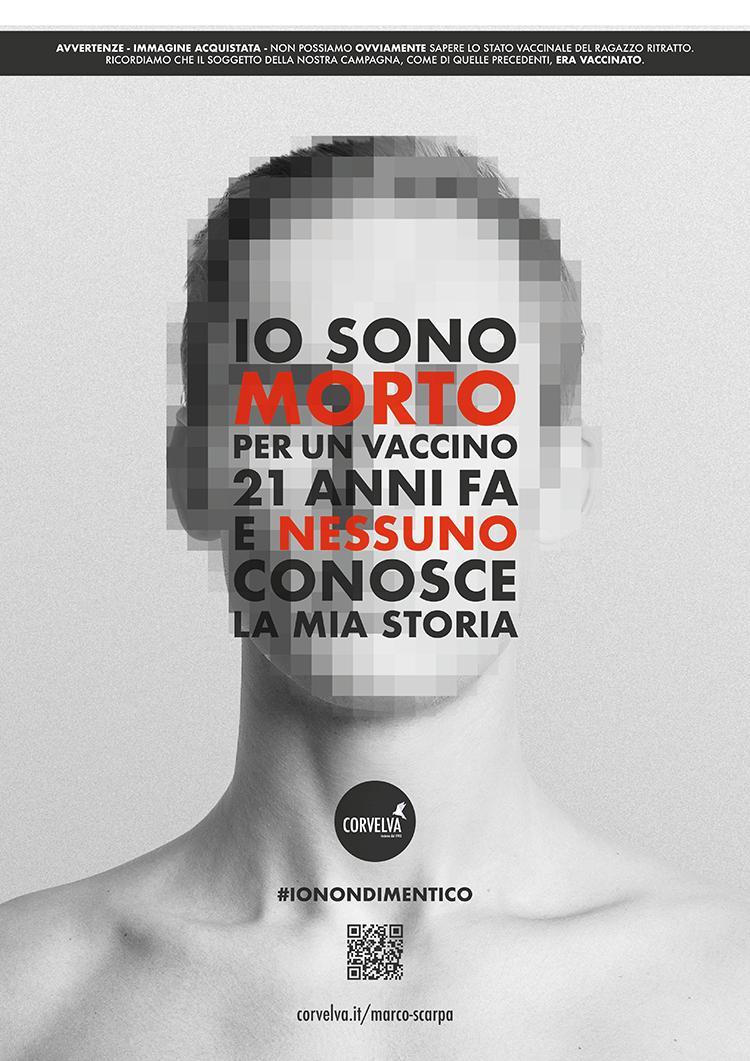 Marco Scarpa was born on 07 May 1994, fulfilling Gianfranco and Marina's dream of becoming parents.

He was born very healthy, and grew well for the joy of his family. But the happiness will not last long: on 03 August 1994, at three months of life, Marco received his first vaccination, DTP (diphtheria-tetanus-pertussis), oral Anti-Polio, Hepatitis B.

After 3 days of vaccination, the parents immediately realize that the baby is no longer the same because he no longer cries, the complaints are continuous, he does not hold his head and he has lost his muscle tone. After 9 days from the vaccine (given to keep in mind), as the situation persists, the parents take him to the pediatrician, and she immediately sees that something is wrong. He makes an urgent request for a neuropsychiatric visit, during which a strong hypotonia is found, so much so that physiotherapy is required.

Are you by chance thinking that at this point someone took charge of what happened, suspected an adverse reaction by reporting it and requesting further information? NO, you are wrong.

45 days after the first administration, the ASL's invitation to administer the vaccination calls arrives…

The parents, who have always placed their trust in doctors and vaccination prophylaxis, bring little Marco to the scheduled appointment, also trusting in the skills of the vaccination staff. The pediatrician of the center, seeing that Marco was unable to fix his gaze, to smile, with a clearly evident neuropsychiatric picture and with the physiotherapy cycle in progress due to the hypotonia, DECIDES TO ADMINISTRATE THE SMALL MARK "ONLY" ORAL ANTIPOLIO AND ANTIHEPATITIS B, temporarily exempting him from the DTP call. It is 29/09/94.

The next day Marco gets worse to the point that the pediatrician, in agreement with the neuropsychiatrist, arranges tests to be performed in the hospital in Padua, where he is hospitalized on 30/09.

He stays in hospital for two days, several tests are performed, but he returns home without a diagnosis, and without improvements.

On 25 October, the seizures begin. Hospital admissions continue, first in Mirano then in Padua, then in Verona, a continuous coming and going that continues until September 1995.

No answer is given to the parents in all this time, at each hospitalization episode the doctors hypothesize new and different diagnoses, but the constant, in front of the questions of Gianfranco and Marina, who rightly every time reminded the doctors that everything had started after the first vaccination and drastically worsened after the second, it is the denial: "vaccination has nothing to do with it".

Here are the words that Marco's parents use when remembering that period:

“With our feelings of worried parents we somehow tried to make ourselves useful to understand together what had happened. Instead their responses have made us feel useless, ignorant and powerless "

In October during yet another hospitalization, Marco has more than 100 seizures in the course of 24 hours. Parents stay with their little one all the time without being able to do anything and always tormented by the same unanswered questions.

"... We practically went in and out of these hospitals without results, but above all without a certain diagnosis ..."

Parents decide to apply for compensation. After five years, the Ministry of Health recognized the damage:

“The appeal, presented by Messrs. Scarpa Gianfranco and Brau Marina, against the judgment of the CMO of Padua (...) is accepted and the cerebropathy that caused the death of the injured person is ascribable to the 1st category Table A attached to the Presidential Decree of 30 December 1981n. 834. Rome 09 February 2001 "

But also this death, like that of Emiliano Rapposelli and other children, does not appear in the Green Channel reports.

The Scarpa family tried to communicate Marco's death to the institution.

“Despite the investigations carried out, no precise diagnostic definition has been reached regarding the pathology of the small Marco scarpa, for which an infectious or congenital cause cannot be excluded. Regarding the institutional role of the Green Channel, which provides for the specialist assessment of suitability for vaccination in doubtful cases, although it is a deceased subject, it can be concluded that the pediatrician's decision to suspend the administration of DTP in the presence of signs of psychomotor delay is to be considered correct "(and is it therefore correct to have administered oral polio and antihepatitis b in these conditions? Without preliminary investigations on the etiopathogenesis of the child's problems? We are not given information. Ed.).

"Regarding the evaluation of adverse reactions to vaccines carried out by this Service, given the complexity of the case and the incompleteness of the investigations, it is possible to provide only an indirect evaluation based on the data of the scientific literature." (And how come there is incomplete investigations after months and months of hospitalizations in different hospitals? And how come nobody thought of providing the suspected adverse reaction report thus giving way to "this Service" to provide the necessary investigations? Ed.)

"From the analysis of the bibliography, the association between DTP and encephalopathy is still sustainable, according to the conclusions of the report of the Institute of Medicine, which analyzed in 1991 the adverse reactions to pertussis and antirosolia vaccines, while there is no evidence of relationship causal with the DT vaccine. About the time interval, according to the indications of the Red Book, 1994, clinical pictures compatible with encephalopathy are subject to reporting when they arise within 7 days of DTP administration "(But Marco began to reveal neurological symptoms after 3 days as reported by the parents Even if the first paper certificate dates back to nine days after the vaccine ... This is why we insist, even talking about 210 / 92 law so that you understand the importance of these formal, certified acts, your word of parents is worth nothing to them! Ed) in fact continues:

"In the case under consideration, there is the hypothesis of an alternative cause to the vaccination at the origin of encephalopathy, and detecting, as the only suspect element, a temporal correlation of 9 days between the administration of the vaccines and the appearance of the first manifestations of psychomotor delay, it is not possible to confirm a causal relationship with the vaccination itself ... "Well, Marco had the first evidence of damage after three days, as testified by Gianfranco and Marina.

Even today, therefore, from 1996 to 2017, 21 years after Marco's death, the Scarpa family fought to see the death of their child recognized by Canale Verde and the Veneto Region and did so out of respect for him. Their pain in remembering those days is immense, but necessary so that their experience can be a warning and not be forgotten. We parents who fight for our vaccination freedom today cannot ignore that their battle is also our battle.