To anyone who cares about children and their rights 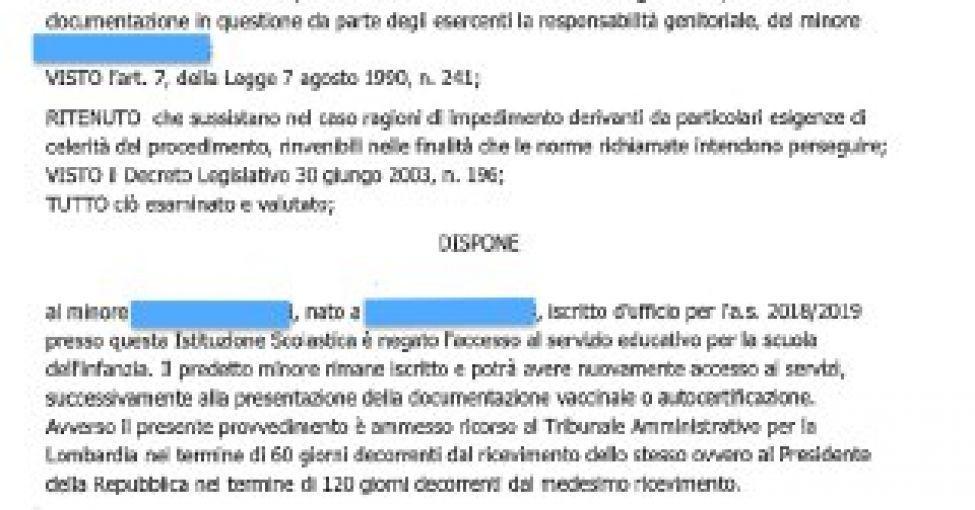 #children are not viruses
#2weights2measures

cpress release shared by the Freedom of Choice Committee and disclosed via link: https://telegra.ph/A-CHIUNQUE-ABBIA-A-CUORE-I-BAMBINI-E-I-LORO-DIRITTI-02-10

These days we don't count them stances to protect children of Chinese nationality (especially those who would have recently returned from their country of origin) who would be at risk of discrimination in Italian schools due to precautionary quarantine requests received from some.
We have seen politicians and personalities of the most various levels (doctors, politicians, epidemiologists above all) holding various positions in national and local institutions to expose themselves in defense of the right to inclusion, the inalienable right to schooling, the right to a peaceful and protected social life of those children who, because of Coronavirus psychosis, are subject to suspicion and are at risk of suffering episodes of marginalization by citizens.

Too bad that in the past 3 years we have witnessed uninterrupted, unified media and
without any hesitation, to discrimination, ghettoization and marginalization of
thousands of healthy children and that they are not carriers of any disease or anointers to be excluded but
they have only one terrible fault: that of not having carried out the 10 vaccinations foreseen by one
of the most discriminatory and vexatious laws of the last decades: the Lorenzin law 119/2017 which extended and tightened the sanctions for those who do not respect the vaccination obligation for 10 vaccines in the
age group 0/16 years, also leaving tens of thousands of children out of kindergartens. 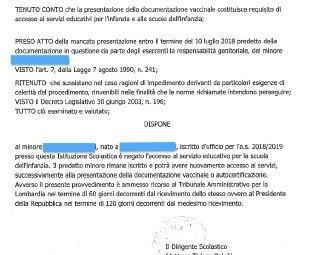 The children, those same children that someone would like to show that they care about today, have been beautifully excluded from the social-educational-school fabric, thanks to the belief (and propaganda) that the unvaccinated should represent a risk for someone.
And for whom? Initially it was tried to pass them off as a risk to the vaccinated. Then a few bulbs lit up in the minds of the promoters and thus a perfect bank was found in the population: the immunosuppressed.

Immunosuppressed people, that category of people "at risk" because of a deficient immune system or eliminated by acute or chronic diseases of which, unfortunately, they are affected.
But "at risk" of what, exactly? At risk of any pathology or infection, resulting from any virus or bacterium they may encounter in their daily life (therefore including Coronavirus). Certainly not only of those bacteria or viruses that vaccines would like to prevent, but of hundreds of others!

So we said that suddenly, in 2017, politics and the mainstream began to worry about the protection of this category of individuals hitherto non-existent for politicians.

And then, without any valid scientific explanation, out of the blue, only the unvaccinated became a terrible plague to eradicate. It matters little if the vaccinations concern only about fifteen diseases out of the dozens and dozens existing and normally widespread in the population (all potentially equally dangerous for the immunosuppressed) and if in many cases they do not constitute collective health protection but only individual protection.
It matters little: the unvaccinated had to become the scourge of our society, and "non-compliant" children had to be compulsorily excluded from kindergartens and nursery schools, removed from one day to the next from their familiar environments, ghettoized and bullied to institutional level, because it was decided so and, to justify that decision, every argument has been used in these 3 years. The classic "divide and rule" strategy, to create factions of good versus bad to justify, in the eyes of the less attentive, measures of compression of individual freedom. 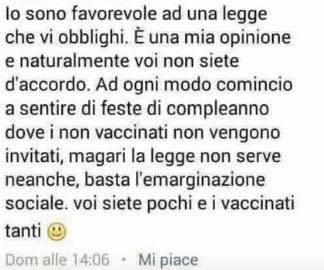 Then came the Coronavirus which had the advantage of suddenly reviving now obsolete concepts such as the right to inclusion, the right to socialization, the defense of children's rights, a hard fight without fear of all forms of discrimination.
So in recent days we have read the most disparate statements from the pages of newspapers: "Children would be unjustly harmed for a theoretical risk" and "ASLs are able to prevent dangerous situations from arising" (Villani, SIP); "No child is a virus" (Unicef ​​Italia); "Only with full-blown symptoms (!!!) those children will not go to school, without being able to stay at home voluntarily (!!!)
and "No emergency, we go to school" (Azzolina, Minister of Education); and many other beautiful words. Many felt therefore obliged to take the defense of children who would have been unjustly deprived of the right to school, not to mention the risk of "hunting the Chinese greaser", which has even been heard on TV, which it would also jeopardize the social life of these children.

Are there perhaps children of Serie A and Serie B?
Maybe yes and, apparently, it is so in Italy: in our country tens of thousands of children - perfectly healthy - not in order with the 10 mandatory vaccines, must remain at home, because they, healthy, they are greasers, indicated and indicated as such by many and various figures, institutional and non-institutional.
Children who have not undergone preventive health care (not without risk) are greasers, dangers for society, plague victims to be marginalized and left out of schools. Their rights are not covered. Of them and of their right to sociality, of the evident wave of hatred and marginalization (created and pushed by the media and politicians, as well as by a part of the scientific community) that followed the controversies related to the Lorenzin law of 2017, to none interest. Indeed, this atmosphere of football supporters, this "hunter's grease hunt" was welcomed with open arms. 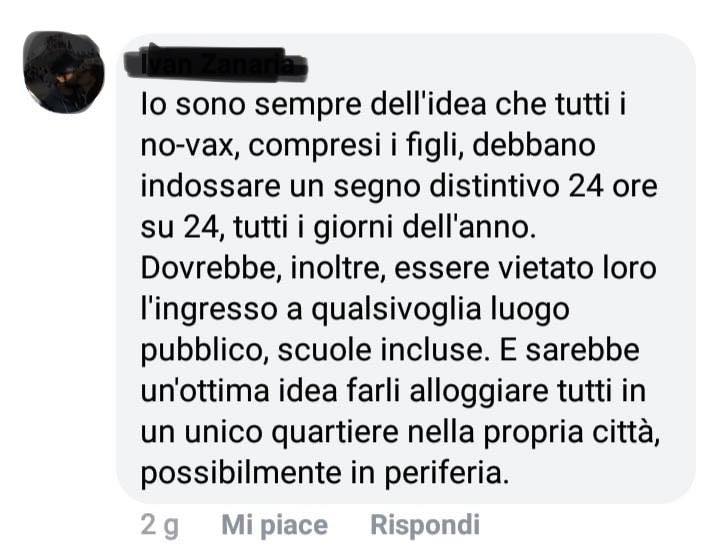 The permanent exclusion from the educational structures of tens of thousands of healthy children has left not only indifferent but even in many cases has aroused enthusiasm and hilarity. He enjoyed these restrictive measures. Nobody cares about sociality and inclusion. Nobody cares about them yet.

Politics then used the "vaccines" theme to make it an election campaign theme in 2018. Parties that had declaredly labeled the Lorenzin Decree as unconstitutional, wrong, dangerous for our society then disappeared once they reached the government. And so the "freedom can not be removed with 4 lines" of the deputy Giulia Grillo has turned into "I've never seen anyone die of vaccines", the "all at school" of the leader Matteo Salvini has turned into deafening silence once the purpose of going to the government of the country has been achieved.

Where is the consistency? All these champions of inclusion where they were yesterday and where they are while tens of thousands of families ask for the same rights for their children?
Children who, from one day to the next, in the tens of thousands, had to leave their families, friends, companions, teachers, as well as plague victims in the absence of an epidemic with damage that nobody calculated. 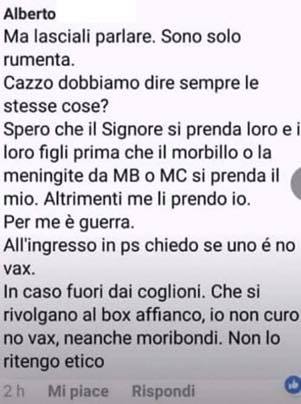 Coronavirus psychosis should (rightly) be avoided, Novax psychosis instead, created and exploited to art, okay? Chinese-hunting is a social risk, is novax-hunting good for everyone? In whose interest?

The time has come to try to mend the relationship of doctor-patient trust, the time has come to cancel, once and for all, the discriminatory and voted laws only to fulfill pacts and agreements that have nothing to do with common sense nor with the protection of public health.