In response to the "Transversal Covenant for Science" 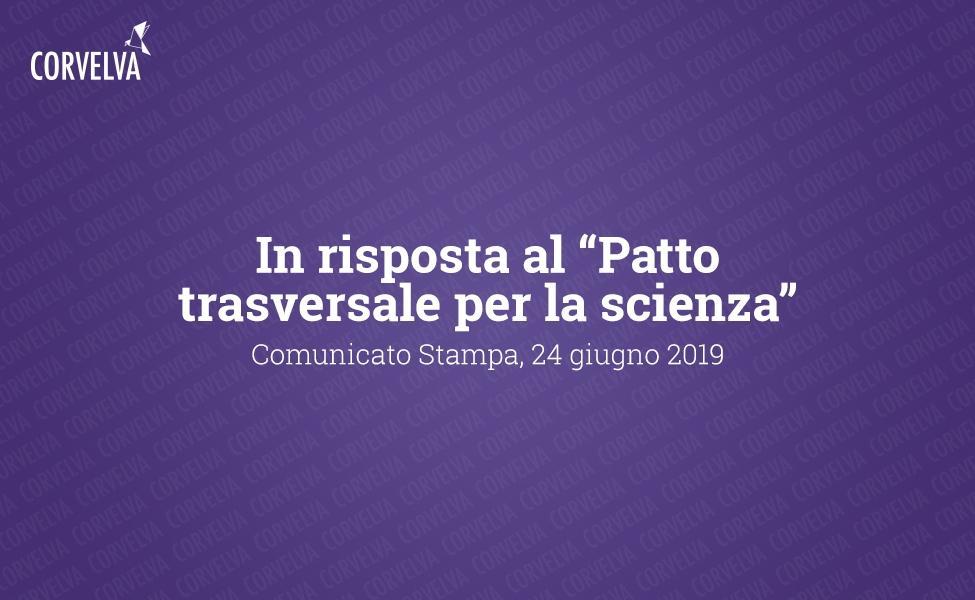 The Corvelva association, called into question by the open letter of the "Transversal Pact for Science", rejects the accusations contained in that press release specifying the following:

This association has been operating for about 25 years within the Veneto region, deepening and disseminating information relating to the SAFETY AND EFFECTIVENESS OF VACCINAL PRACTICE. It also provides listening and advice to those who, in full freedom and conscience, choose a different path than that which is imposed today with the "massified" vaccination practice (without any personalization).

Numerous cases of damage from vaccine have been confirmed and confirmed by hospital medical commissions, by the Ministry of Health or by the Courts, which over time have been followed and supported by the Association.

We never allowed ourselves to advise or advise against whether and which vaccines to do or not to do: we operate and fight for the freedom of therapeutic choice, therefore any kind of interference with people's choices would be contrary to our founding principles!

Unlike therefore those who make these accusations, we base our activity on the principles of free information and independence of sources.

Therefore to say that there are parents who have "let themselves be persuaded" by associations like Corvelva not to vaccinate their children is a pretext, untruthful and defamatory statement.

We should rather reflect on the various cases of regularly vaccinated children who have in any case contracted the diseases for which they were vaccinated and on the tendentiousness of some "official" campaigns aimed at ensuring that vaccinated means immunized, that vaccinated always means protected, as well as excluding the existence of risks even though declared by the producers themselves ... We consider these campaigns to be much less objective and balanced than those for which we are accused in these circumstances.

This association is made up of parents and private citizens who firmly claim the right to freedom of speech, thought and expression. Without having to explain to Professor Burioni and his colleagues what we are allowed or not allowed to say especially when we are doing nothing but spreading data and studies that are officially recognized or in the process of being recognized, easily accessible to most.

We invite you to a collective reflection on the meaning of the word CENSURE and on what society is waiting for us if we continue with this undemocratic drift and aimed at putting a gag on people whose thoughts do not fully adhere to what was decided "from above".

We have always been supporters of the reopening of the medical-scientific debate, a debate that is in the interest of all citizens to go back to having superficial ideological positions fomented by an infantile media distinction between "good" and "bad", ProVax or NoVax.

In the specific case of the 10-year-old girl hospitalized in the Verona hospital, Corvelva will not comment until there are OFFICIAL communications from the hospital or family members regarding diagnosis, course and therapies. To date, nothing has been confirmed by those responsible, limiting the information to newspaper headlines and consequent pretexts.

Now, coming to the merit of the press conference, we will make the most disparate personalities speak. The ex-vice-president of the Parliamentary Commission of Inquiry "Uranium Depleted", Ivan Catalano, will speak, who will bring the results of a scientific publication, financed by us, which confirms the data of the commission itself. Is it unscientific? Is it considered an attack on public health?

The surgeon and epistemologist, Pier Paolo Dal Monte, will speak on the issue of DDL 770. Is making a doctor talk about the technocratic drift of a bill is to be considered an attack on public health?

Corvelva will speak, bringing analytical data confirmed by several laboratories that attest to a POSSIBLE scam against the community. Recall that the law provides that the citizen, consumer, can verify and report possible non-compliance of pharmaceutical products. Is it a public health attack to ask your institutions for help on laboratory results that reveal major problems on certain pharmaceutical products?

We invite readers to reflect on what we are witnessing, certain that they are not braying donkeys as someone likes to define them, but citizens worthy of representing a critical mass.

Giving space to requests such as those made by the transversal pact for science means allowing the compression of rights such as freedom of thought and freedom of information, enshrined in our Constitution.