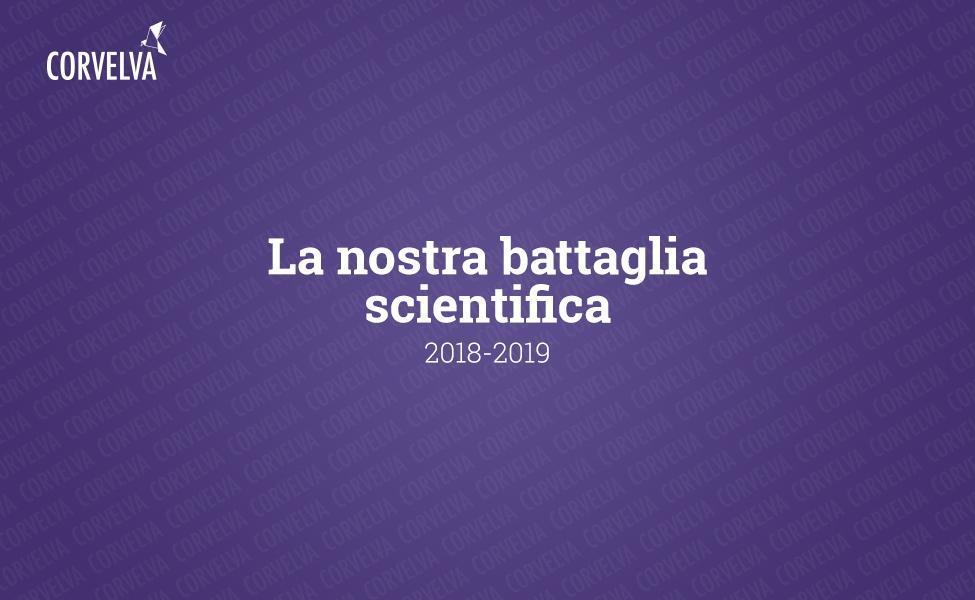 If our scientific program seems consistent to you JOIN OR MAKE A DONATION. Only in this way can you support us. You can give us your support even if you are not Veneto because our projects have a national echo and the goal is common. Every single euro will be destined to destroy this sick system and every gram of energy aimed only at countering any obligation. We have always been for vaccination and therapeutic freedom!

For decades, Corvelva has carried out dissemination, research and dialogue activities with political authorities in the utmost transparency, with the aim of supporting freedom of choice in all areas of health, and particularly in the field of vaccinations.

Corvelva has completed various actions of great social impact, in the context of pediatric vaccinations, including freedom of choice from 2008 to 2017.
In 1999, after 6 meetings with the Minister of Health, it led to the approval of Presidential Decree 355 for access to school for children never vaccinated. He has actively collaborated with the CONDAV for the approval of law 229 for fair compensation in favor of those affected by vaccine. His popularization activity and the support given to the injured are also well known as his main mission.

In this work perspective, thanks to the contribution of the membership fees and donations of the members (remember that we operate only in the Veneto region and therefore very limited), Corvelva had the opportunity to start various research projects in the years 2017-2018; projects under discussion for years, but never started due to lack of funds. Often, too often, the character that distinguishes us has limited us in divulging our projects. This happened on the one hand because of our total lack of interest in "applause" (we have always considered it more important to do than to say), on the other hand because of the experience that leads us to know that important things must be protected from possible attacks, until you can do it.

However, we want to list here what, between the year 2017 and the year 2018, we have done and what we have started or intend to launch to counter not only the Law 119, but the whole schedule that provides for mandatory as a viable way in the health sector. Corvelva does not come to terms, all that is not freedom of choice for us is "fried air". So also for any "changes" to 119, which would only mitigate some of its aspects: it goes very well as an appetizer, but the battle must be, for us, against the obligation entirely, and for the recognition of those scientific truths that today we see denied to the bitter end.

1.0 Study of the components of the vaccines
This line of research has been started as a consequence of several international research studies (see studies by Dr. Deisher, Dr. Lee, Dr. Montanari and Dr. Gatti, etc.) which have demonstrated the lack of transparency regarding the quality of the vaccines, and as a consequence of the recent publication of the final report of the Commission of Inquiry on the military, which highlights the presence of contaminants administered in cumulative doses, for which neither the maximum tolerated limit is known, nor the toxicity following administration for intramuscularly in adults and children (see EMA answer to the question on the maximum tolerated limits for the components present in the vaccines of Hon. Catalano Ivan).

The researches that will be dealt with below, are carried out at Italian and international research centers and in collaboration with specialized professionals, on whom Corvelva intends to maintain confidentiality until the results are published, except for the people directly involved in the projects themselves.

This study includes multiple subprojects such as:

1.1 Qualitative and quantitative analysis of biological contaminations (human and animal DNA, viruses, bacteria, fungi ect ...)
IN THE CONCLUSION PHASE. This research was started in 2017 and is about to be completed shortly. Preliminary results confirm the presence of contamination in quantities significantly above the limit imposed by the EMA and the FDA. The research team that is carrying it out is part of an international center with very advanced skills in the field of gene sequencing.
The qualitative and quantitative determination of this type of contamination is of fundamental importance, as no threshold is acceptable for biological material other than antigen in a drug administered in early childhood.
▪ TIMING: nearing completion
▪ COST: Medium-High

1.2 Qualitative and quantitative analysis of chemical contaminations
This study is being discussed with an international center, the plan is to start it later in the year. This research is particularly expensive because it requires the support of specialists from multiple branches in chemistry and microbiology and multiple highly qualified laboratories, which is why the investigation of these types of contaminations will depend exclusively on the funds available at the time of signing the contract.
▪ TIMING: to start in 2018
▪ COST: Alto

1.3 Epidemiological study of the database provided by the Padua prosecutor's office on military missionaries and non-missionaries
This research is currently underway and was started with the collaboration of a team of clinical epidemiological / statisticians, who offered their expertise to continue the work presented to the Parliamentary Commission of Inquiry. The objective is to determine the real (or as accurate as possible) incidence of disease cases in the military population, both missionary and non-missionary; despite the worrying reality of the damage (both from vaccine for non-missionaries and from multiple toxic factors for missionaries), the data presented to the Commission had not yet been processed from a statistical point of view to determine the extent of the damage. Corvelva also widely supported the disclosure of the results of the Commission of Inquiry and the information campaign of the Hon. Catalano Ivan and intends to finance all the projects that the Commission of Inquiry has left pending in order to confirm the results of the Commission itself.
▪ TIMING: nearing completion
▪ COST: Medium

1.4 Parliamentary Commission of Inquiry Depleted Uranium
Corvelva has long decided to finance all projects aimed at confirming the results of the Commission's final report. We have allocated large amounts of capital for this project and we have planned a series of sub-projects that, for security reasons, we will not list before they leave.
▪ TIMING: started in 2018 and to be continued
▪ COST: Variable

2.1 Collection of anamnestic data on vaccine status and vaccine antibody titrations
The goal so far has been to create a platform for large-scale data collection; the pilot study was carried out and did not bring the expected results, due to the lack of usable data. This study was born from the need to answer the question concerning the efficacy of the vaccines administered, and the state of natural immunization in children never vaccinated, as it is known and does not require demonstrations that the vaccination coverage does not coincide with immunization (i.e. antibody development).
It should be remembered that vaccination immunization in turn does not coincide with protection from the disease for which it is vaccinated, as the vaccines are suitably modified, even genetically, to be immunogenic (differently than the infectious agent) but not infectious , unlike the naturally contracted disease that leads to the formation of protective antibodies often for life. For this purpose, the comparison between the degree of immunization in the vaccinated population and the degree of natural protective immunization in the never vaccinated, should allow for greater clarity on the real usefulness of vaccinations, compared to natural immunization. It should be emphasized that to date this study, of great importance, has never been developed before, neither at national nor international level.
To start this study, a working team has been created which makes use of the collaboration of medical specialists, a clinical statistician who owns the platform, IT and privacy experts for data processing according to the new European legislation. Corvelva left the project after contributing, we believe in a substantial way, to its launch (not only economically but also operationally supporting every phase of the start-up).

This project required a high commitment of human resources and consequently of funds for the maintenance of the database, a commitment that Corvelva no longer believed it could maintain.

2.2 Comparative study of the state of health between vaccinated and never vaccinated
Evaluating the incidence of certified pathologies in the two representative groups is the core of this project. Its development will depend exclusively on the possibility of financing it. It is not necessary to underline the great importance of this study, proposed by various research groups at an international level, but so far never reached definitive conclusions (or statistically significant preliminary results)

In addition to these purely research projects, Corvelva has supported and still supports with transparency of intent (i.e. with the aim of knowing the scientific truth and not the science of propaganda) the analysis of the scientific literature, by researchers of various branches, to carry out correct information on the efficacy and safety of vaccines, on the freedom of therapeutic choice and on the protection of the environment.

Furthermore:
It has made available legal funds for the public administration to defend members from various situations (in particular in the last year in the school environment)
He produced information campaigns of various nature and entity (posters, advertising pages, leaflets, web)
It supported some organizations that contribute to the spread of freedom initiatives

In recent years another topic that we have addressed is related to children with post-vaccination problems. The author Coulter defines "minimal brain damage" and are those children who have learning problems, hyper activity and the big problem of autism. All the treatments that have been proposed have been evaluated by us and for the moment we have not found a remedial therapy, we are currently in contact with a center that is experimenting with a new technique and we will inform you if the results are interesting. in this regard, we recall that in the past 10 years, 55.000 children have been psychiatrized in the Veneto. You read that right, the number and who has these problems at home has a very difficult life.

This activity requires a high commitment on the part of several people, who work on a voluntary basis, but who still need to be supported in the expenses to carry out their high quality activity for a public utility service.

Law 119 which imposes the vaccination obligation on the basis of vaccination coverage and states as an incontrovertible truth that vaccines are safe and effective drugs, is not reflected in the reality that reaches Corvelva daily as a testimony to an increasing number of parents who testify vaccine damage, not recognized by the scientific community as it is considered statistically insignificant, to which the association has always given voice and help in various forms, first of all dialogue with political forces so that they recognize the importance of protecting these families and to defend the inviolable constitutional right of freedom of choice.

To this end, Corvelva is carrying out only work programs based on the same principle expressed by Venetian parents before 2008: asking for total vaccination freedom by bringing incontrovertible scientific documentation attesting to the precautionary principle.
If, together with the Venetians, he managed to bring vaccination freedom to the Veneto, he did not do so by compromising.

We ask you to continue to be at our side in this battle, joining or giving is a gesture of support that can make the difference in the success of our intentions.