Open letter to the presidency of the Veneto Region 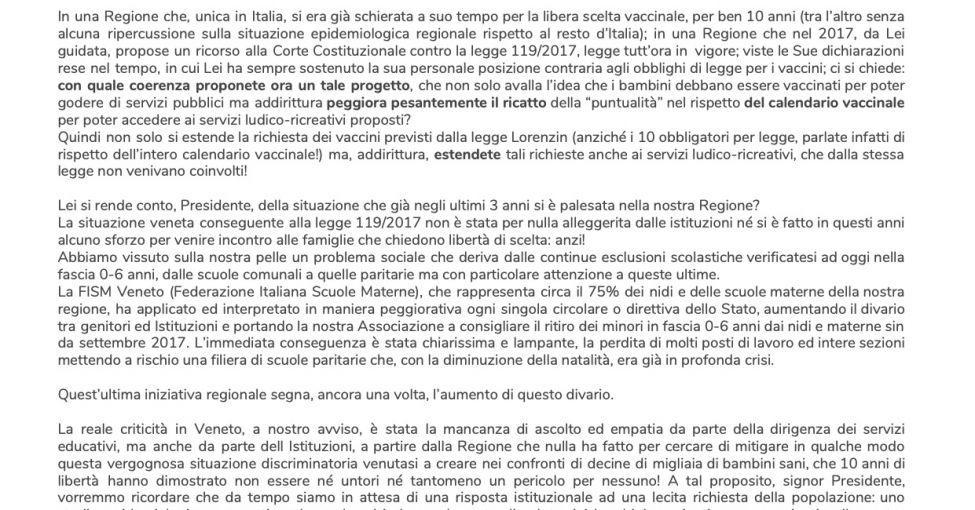 We publish the open letter sent on May 7, 2020 to the Presidency of the Veneto Region:

Open letter to the presidency of the Veneto Region: do not use blackmail in an emergency to extend vaccination obligations on children!

Corvelva Aps is an association that since 1993 has supported Veneto families who are fighting for freedom of treatment and vaccination choice. Today we write somewhat worried by the latest statements to the press of the Veneto councilor for health Manuela Lanzarin regarding "a protocol for services for children from zero to six years to experience the reopening of nursery and early childhood centers, in a playful / recreational form , in Phase 2 of the containment of the Covid-19 epidemic ”. In particular, given our attention to the topic, we focus on the following statements:

"Children who will attend these recreational and recreational services will also be required to comply with the regional vaccination calendar and, in view of the next autumn-winter season, flu and pneumococcal prophylaxis is also provided."

In a region which, unique in Italy, had already taken sides for the free choice of vaccine for 10 years (among other things, without any repercussion on the regional epidemiological situation compared to the rest of Italy); in a Region that in 2017, led by you, proposed an appeal to the Constitutional Court against the law 119/2017, law still in force; having regard to your statements made over time, in which you have always supported your personal position contrary to the legal obligations for vaccines; one wonders: with what consistency do you now propose such a project, which not only endorses the idea that children must be vaccinated to be able to enjoy public services but even seriously worsens the blackmail of "punctuality" in compliance with the vaccination calendar to be able to access to the recreational-recreational services offered? So not only does the request for vaccines provided for by the Lorenzin law extend (instead of the 10 mandatory by law, in fact speak of respect for the entire vaccination calendar!) But, even, extend these requests also to recreational-recreational services, which by the same law they weren't involved!

Do you realize, President, the situation that has already emerged in our region in the last 3 years? The Venetian situation resulting from Law 119/2017 has not been alleviated by the institutions at all nor has any effort been made in recent years to meet families who ask for freedom of choice: on the contrary! We have experienced a social problem on our skin that derives from the continuous school exclusions that have occurred to date in the 0-6 age group, from municipal to equal schools but with particular attention to the latter. The IMF Veneto (Italian Federation of Nursery Schools), which represents about 75% of the nursery schools and nursery schools in our region, has applied and interpreted every single circular or directive of the State in a pejorative way, increasing the gap between parents and institutions and bringing our Association to recommend the withdrawal of minors in the 0-6 age group from nursery and kindergartens since September 2017. The immediate consequence was very clear and obvious, the loss of many jobs and entire sections putting at risk a supply chain of peer schools which, with the drop in birth rate, were already in deep crisis.

This latest regional initiative marks, once again, the widening of this gap.

The real problem in Veneto, in our opinion, was the lack of listening and empathy on the part of the leadership of the educational services, but also on the part of the institutions, starting from the Region that did nothing to try to mitigate this shameful in some way discriminatory situation that has arisen against tens of thousands of healthy children, who 10 years of freedom have shown to be neither greasy nor a danger to anyone! In this regard, Mr. President, we would like to remind you that for some time now we have been waiting for an institutional response to a legitimate request from the population: an epidemiological-prospective study that will investigate the health of vaccinated and unvaccinated children in our Region. In this area, which has lived this window for 10 years without obligations, and which boasts a well-established and ten-year computerized system, it would not be a problem to propose the analysis of these data, in a completely legal way, with the possibility of aggregating and anonymize the data. Why hasn't it been done yet? And why has the Region not given any answers in all these years?

We remind you that our association has actively cooperated and helped over 350.000 families over the years and of these, which have not disappeared into thin air, a large part is included in the 20.000 minors who were declared defaulters in the 0-6 years range, or who are excluded from school exclusion . 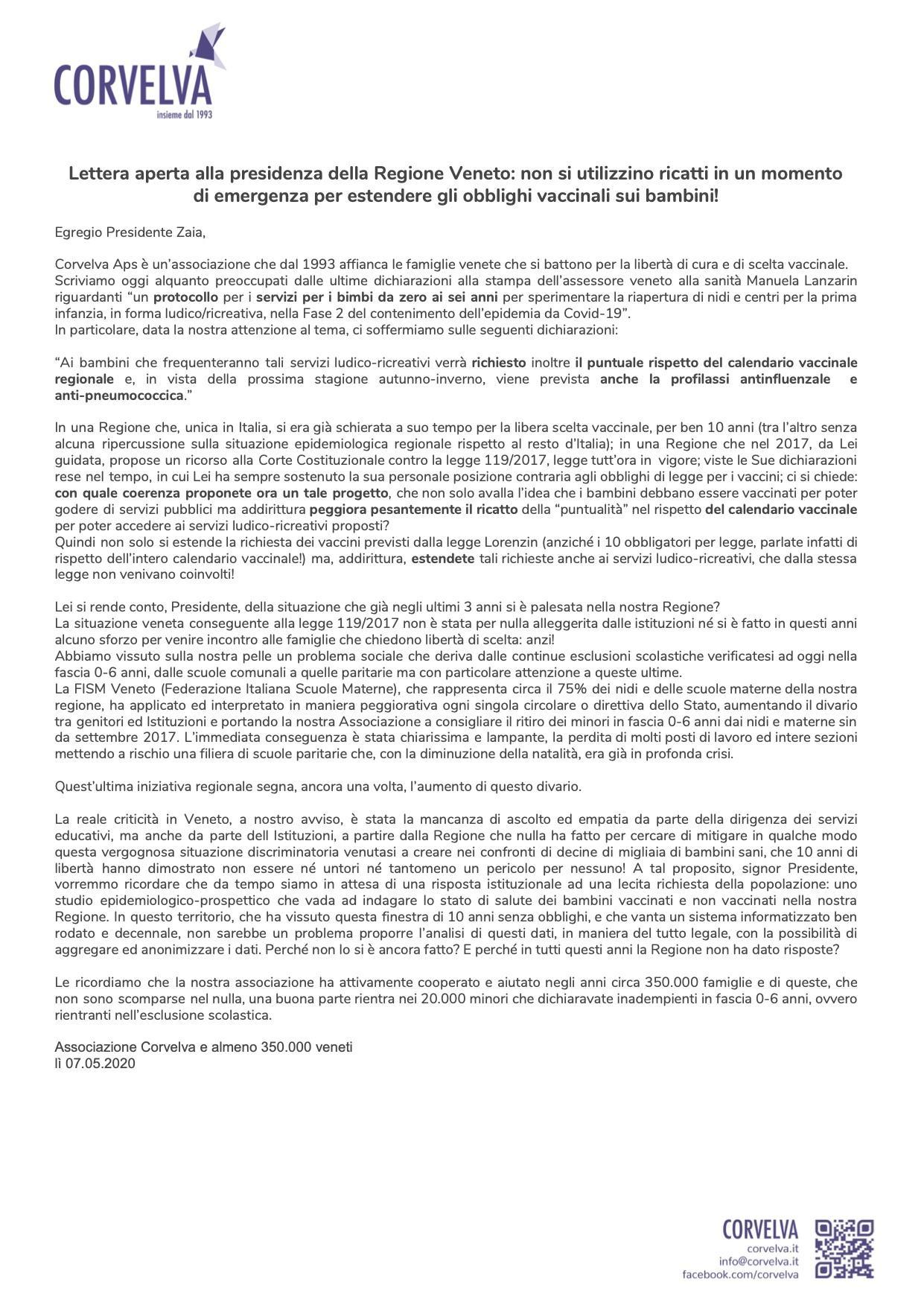 We refer to a proposal for an experimental plan for children which you can read here: https://www.ecovicentino.it/veneto/fase-2-nelle-scuole-dellinfanzia-piano-sperimentale-della-regione-per-riaprire-i-servizi/