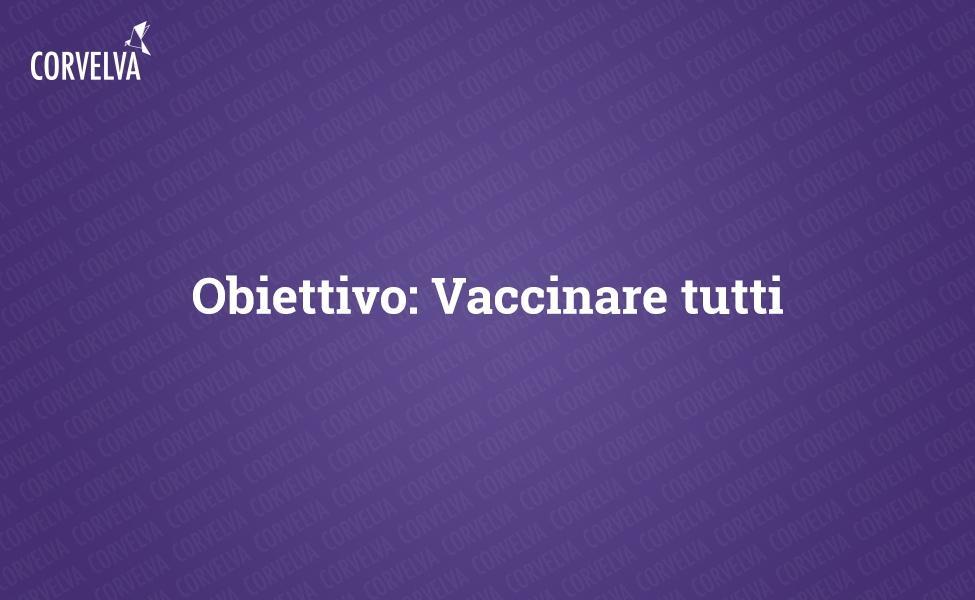 For those who still had doubts, it is now clear: the vaccine issue is far from closed.
Law 119 is not enough, obviously the goal is much broader and the Lorenzin law was only the beginning. The current government is relaunching big time, and as always the media outbreaks are rushing to the rescue offering ideas (no matter if they are pretext, false or misrepresented) to justify new measures and new fake emergencies.

In recent days, the outbreak (8 cases, eight of them) of measles in Bari has given new life to yet another wave of alarmism and related countermeasures.

There is a compliment for the varied imagination: from punishments to incentives, they went wild.
And so we start with the ravings of the prison for novax invoked by a certain Novelli (Forza Italy) who declares shamelessly that "in the face of involuntary infections ... criminal penalties must be provided" ... (excuse us Novelli, but Does this also apply to vaccinated people? Or will you find the way to write in the law that the vaccinated greaser is morally innocent and the unvaccinated greaser must atone for his guilt?) He continues "Among those who bring scientific evidence and those who believe in mermaids are and I will always be on the side of the first "... Maybe someone should explain some little things to Novelli, first of all that it is precisely the scientific evidence of which he speaks, to foresee the possibility that the infection starts from a vaccinated person; after which Novelli should be very well explained how do you establish with certainty who the patient is and what safety margins are there to indicate one person rather than another as guilty, in a disease such as highly contagious measles and for which use a live virus vaccine that can undergo (and undergo) mutations. But who cares, just fill your mouth with the words "SCIENTIFIC EVIDENCE" and magically everything becomes possible and real ...

It does not end here, we also have the distinguished Ricciardi, ISS president, who regrets that dangerous unvaccinated (but healthy) greasers can access education: he says that the real problem, the cause of everything, is the dpr 355/99 "It has been created in Italy since 1999 - explains Ricciardi - since Parliament abrogated the obligation to enroll in school with the vaccination certificate, a real microbiological bomb. Children who did not get vaccinated in 1999 today they are 18-19 years old and are tens of thousands; they live and move and measles is one of the most contagious viruses that exist "But in '99 what were the compulsory vaccinations? Tetanus, antidiphtheria, polio, hepatitis b ... well, what does Ricciardi have to do with measles? Can you explain it to us ??? Logically, with or without that decree, children would have been vaccinated or unvaccinated for measles in exactly the same way ... but who cares, what matters now is to raise the bar and ... open the way for him. barrier at compulsory school ...

The Order of doctors of Como relaunches with a media campaign that praises discrimination, starring a girl, "isolated or vaccinated?" Is the question that dominates the advertising billboard (badly managed, it must be said) created by them.
So, in a vacuum, before realizing it, we came to a society that accepts and supports the discrimination of healthy children who are free from miraculous bites. A prick and you're socially acceptable, no prick, no social inclusion. Aberrant.

Instead there are those who point to a technique much loved by trainers: positive reinforcement. And so there are incentives for those who get vaccinated; the goal, says De Micheli, is to vaccinate 800.000 young people over the age of 16. And let's go to the most effective solutions for this age group: we think of "incentive measures that would aim precisely at facilitating the mechanisms connected precisely to access to public competitions or to university courses".

We must face reality: they are willing to do anything to achieve the goal of vaccinating everyone and, possibly, everything. In fact, those who believe that the only real goal is the eradication of measles (a possibility to be demonstrated, scientific evidence in hand) is very wrong: the new bill 770 (government bill, which is being examined by the Hygiene and Healthcare in the Senate) provides for the introduction of obligations whenever it is deemed necessary in the face of deviations from the coverage compared to what is envisaged in the national vaccine prevention plans: ergo, today it is measles, tomorrow it could be any other vaccine, from HPV the flu shot through the anti-meningococcal or even any new future vaccine.

How long have we seen this media circus? To the increasingly exacerbated tones, to the upward game, to the instigation to discrimination, to the hunt for the greaser? We realize, someone realizes, that vaccines have been filling the pages of newspapers, news headlines, politicians' statements, talk shows for 2 years now, and who more has more? Does this country really have no other urgencies? Are we all really in danger of missing vaccination coverage? But where are these ultrasounds, where were they before 2017? Where were the immunosuppressed? Didn't they exist?
And what do we want to do for the deaths from hospital infections? For the increase in childhood cancers? For the rise in diabetes? For the increase of 40% of disabled people in schools? How come these are not emergencies? We have already written about it here https://www.corvelva.it/ddl770-lavoro : mortality in Italy according to Istat tables sees other primary causes ... nobody wants to deal with it?

Yet another appeal to anyone who still has a civil society at heart, citizens, politicians, technicians, doctors, all: the measure is full, here a social tension that can become dangerous is deliberately taking place, it's time to stop indulging this madness. There are no vaccine-related health emergencies in this country, there were, by Gentiloni's own admission, in 2017 with the lorenzin decree, let alone today. The only emergency to remedy, perhaps, was the growth of a certain diffidence and distrust towards a medical class unable to "take care" but very good at "taking incentives", with corruption scandals and medical malpractice on the order of day. And when the people raise their heads ... then democracy is no longer "moral" ...