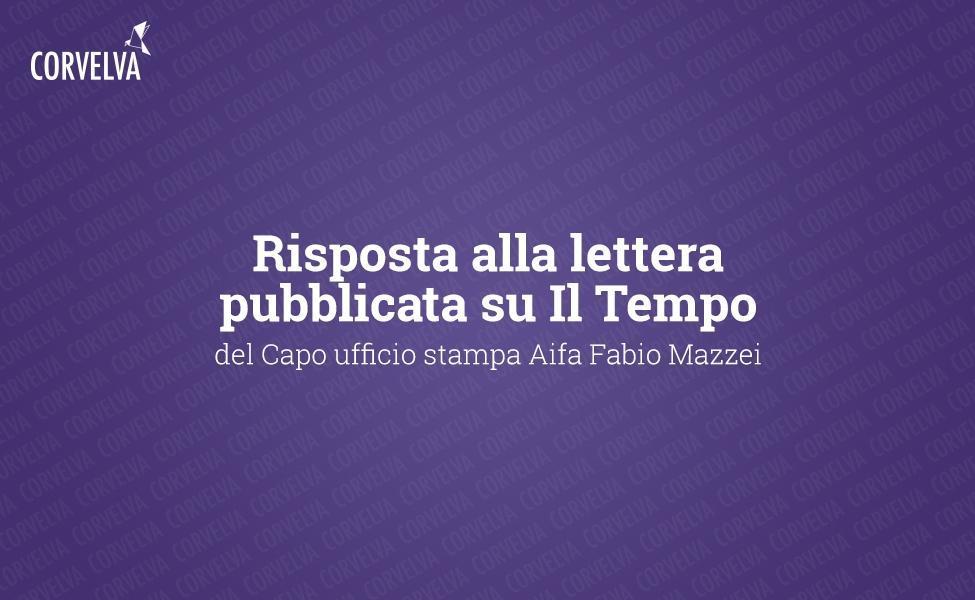 On 25 December 2018, on the online version of the newspaper "Il Tempo", the letter from the Head of the Aifa press office Fabio Mazzei was published entitled: "The Aifa, those vaccines were all in place. The Medicines Agency claims to have tested batches on the market "(article link https://goo.gl/m47XCJ).

To better respond to Mazzei's statements, we take a comment by Dr. Loretta Bolgan who is supporting us in these analyzes:

"I took the liberty of commenting on the article as follows:

I must underline something important once and for all: Corvelva is NOT checking the batch release and has NOT requested to use validated methods for batch analysis, as producers, accredited laboratories and the ISS must do. What is being conducted is a simple investigation that is done early in the development of a vaccine, that is, screening. AIFA cannot request accredited methods for the release of the batch, because it would take years to validate them, and outside of our purpose it is not to become a certification body for the release of the batches, especially since the methods envisaged in the European pharmacopoeia are not used for the analysis of vaccines, but latest generation methods, not yet acquired in the pharmacopoeia for this purpose.
I consider the very serious claim not to take into consideration the results presented because not reviewed by the scientific community ... the methods are already reported in the literature attached to the reports, and in any case here we are talking about non-conformities that are beyond the evaluation as scientific research because they have an impact on public health. Often medicines are withdrawn from the market because they are not compliant and I do not know that any publication is required, the samples are withdrawn and analyzed. Point.

As for the fact that EMA replied in July 2018, I would like to point out that EMA has underlined that it is the responsibility of AIFA to answer our questions regarding the Priorix tetra because of national registration. And the AIFA does not respond with the analytical data made on the lots and safety studies in hand (since as they claimed the controls have already been carried out by the producers, by the accredited laboratories, paid by the producers, and by the ISS I hope unpaid also these from the producers), but saying that the EMA has already replied to us and that they will not take our data into consideration until we publish.

I would say that the first scientific issue here is safety for health, and if on the one hand publications are in progress and will follow the orthodox process for peer reviews, on the other it is not ethically correct to wait for publication with peer review when there is also the only suspicion that a widely used drug, administered on healthy pediatric population and also sick at birth, may cause damage to health.

We will also carry out the second level analyzes with additional control standards on chemical and protein analyzes, but it was still necessary to make the recipients of the vaccinations aware of the results of the first level analyzes, therefore preliminary, asking who has the burden of proof on the quality, safety and effectiveness of responding!