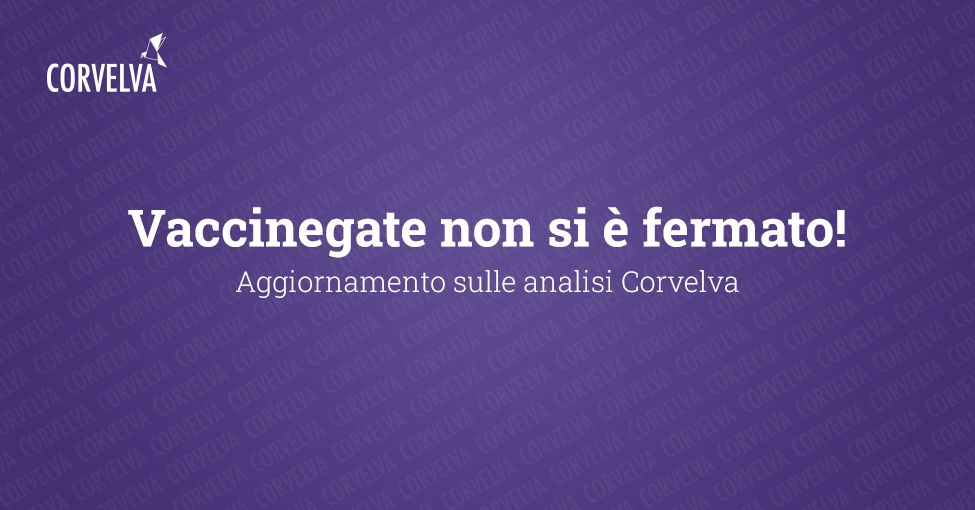 these days are very intense for us and full of situations that can open interesting doors for the battle of freedom of choice.

Just a couple of days ago we received a news and we want to share with you but since many of you are new, it is necessary to make a small introduction.

From 2018 to the first months of 2020, our Association had taken on the task of commissioning independent analyzes on some batches of pediatric vaccines.1 Over time we had concentrated our efforts, especially economic, on the Priorix Tetra, Infanrix Hexa, Hexyon and Gardasil 9 vaccines since from a first analysis carried out in 2018 on many more vaccines, some had significant differences compared to the technical data sheets. Of course we hadn't relied on laboratories located in cramped basements, but we had identified, with the help of Dr. Bolgan, independent laboratories and prestigious universities.

It should be remembered that Corvelva did not wake up one morning deciding to carry out specific vaccine analyzes: everything originated mainly from the Parliamentary Commission of Inquiry "Depleted Uranium", more specifically, from its final report published in February 20182 where there were some problems related to vaccines that could not remain unanswered. The findings were so impactful that we were particularly surprised to see that Parliament had not complied with one of the constituent principles of the commission itself, that of the verification "on the components of vaccines administered to military personnel".3 In fact, a Parliamentary Commission had also been set up with the specific purpose of verifying the composition of vaccines by analysis but it had not done so ... we therefore took the place of the State.

Today, after almost two years of waiting, we can tell you that we have not stood still and even though we have continued to beat on this point and we can inform you that in January 2023 we will have a new hearing with the GIP of the Public Prosecutor's Office of Rome!

They will be able to file us or follow up on our complaint, we have certainly shown that a small local association, with the help of its members and friends who have contributed, has managed to put the spotlight on an international level on a very important issue concerning the safety of vaccines, especially pediatric ones. The chaos we created on the analyzes saw us end up even in Nature6 and on the front pages of some newspapers,7 up to publications in scientific journals8 but this is not enough and has never been enough for us, we want to know why the Italian State, through AIFA, has not supervised the quality of the vaccine product and why an entire Parliament has disregarded the findings of one of its parliamentary committees, as well as the same constitutive principles!

We will update you after the hearing ...