What did we find in the 6-in-1 (Infanrix Hexa) vaccine? 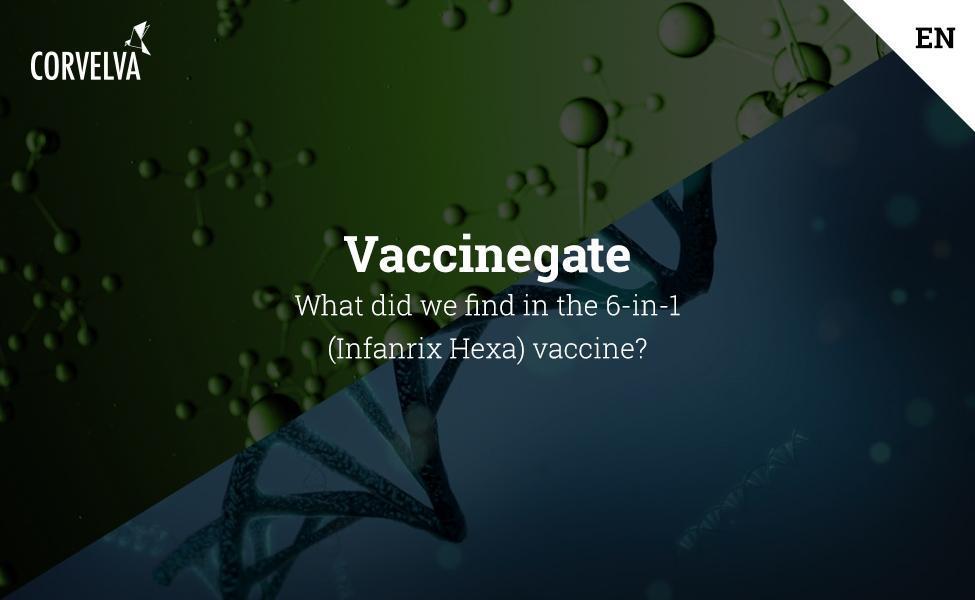 We want to take stock of the situation together with you. Eight months have passed since July 2018 and in these length of time we have achieved extremely satisfying results. We have presented a research program and regarding the vaccines analysis we are able to make a point of reference, with the objectives achieved, those being finalized and those only planned for now.

To begin with, the analyzes of 2 compounds for each vaccine have been verified by means of standards, using certified control standards with a concentration in the order of micrograms / mL. The compounds we have chosen are among those known for their critical hazard profile. We are talking about a cumulative quantity, a total amount of those recognized as identities and those to be identified, which can be estimated within the order of 50 micrograms / mL, in contrast to the EMA / FDA guidelines.

These tests have given positive results, therefore they fully confirm the analysis method! The contaminations observed are probably due to different and variable manufacturing process' phenomena and topics. What has been observed in the course of the studies is an "inter-batches" variation of the composition, which makes us assume that there are some steps along the whole product manufacturing process that are difficult to control.

In-depth information on the vaccines analyzed

They were found in the vaccine:

They were not found:
Six antigens are declared in Infanrix Hexa vaccine: tetanus toxoids, diphtheria and pertussis (three antigens), D antigens of the three polio viruses, chemically engineered proteins for hepatitis B and haemophilus polysaccharides chemically bound to the tetanus toxoid as carrier. Treatment with formaldehyde and glutaraldehyde is necessary to produce toxoids, which should remove toxicity while maintaining the ability to create protective antibodies against the original toxins. We were expecting to find the three toxoids and the other antigens not chemically modified by formaldehyde and glutaraldehyde treatments, separable from each other and digestible by the protein-specific enzyme (trypsin). Instead, an actual polymer was found, insoluble and indigestible, consisting of the set of chemically bound antigens, on which information is also available in the literature for individual antigens. 4-5
This macromolecule has not been recognized in any way by the protein databases and is therefore in fact a solid compound of an unknown chemical structure.
The proteins solubility and the possibility of being digested (ie reduced to small peptide fragments) are the two typical characteristics making it possible to study them by protein analysis methods and which are a necessary requirement for interaction with the immune system for the creation of protective antibodies ; if the structure of a protein is profoundly modified from the original one, even the antibodies will be completely different from those that are able to attack the original antigens causing the diseases.
Since this polymer derived from the mix of antigens, is not only different from the point of view of spatial conformation but above all it is different from a chemical point of view, we can state that we are not facing similar antigens to the original ones but a compound with an unknown and unpredictable toxicity and effectiveness.
In addition to the fact that vaccination antigens have not been actually detected, 65 signals of chemical contaminants have been found, 35% of which were known, ie recognized for comparison with databases.

Among these signals, 7 chemical toxins have also been identified; these toxins not yet uniquely defined in the structure, seem partly to derive from the reaction of formaldehyde, glutaraldehyde, and cyanogen bromide with other chemical contaminants present in the vaccine. We'd like to point out that a large proportion of these toxins have a proven and reported toxicity in Pubchem or Toxnet and pose a significant safety concern.

The study of the protein and peptide fraction has shown various free peptides (ie short fragments of amino acid chains) of bacterial and fungal origin. Bacterial peptides are reported in the literature as potential allergens and capable of inducing autoimmune reactions and these also pose a safety concern that will need to be clarified with regulatory agencies.