Ema "responds" to our requests for clarifications relating to metagenomic analyzes 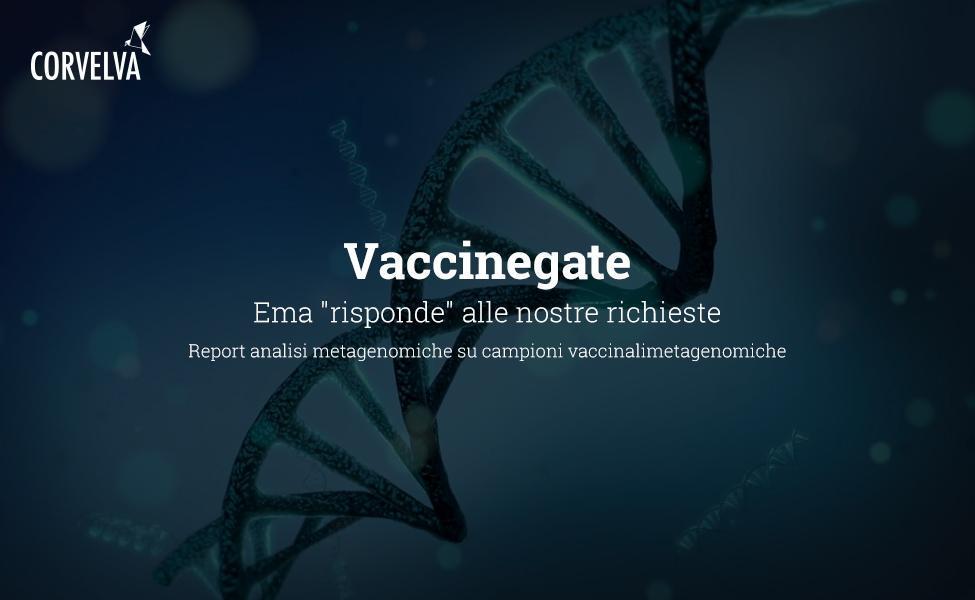 We report in full the email exchange between Corvelva (here the link of the e-mail sent to EMA) and EMA in reality to recent analyzes (here the link of the analyzes). Our answer follows the answer obtained.
We will now take care of it, requesting the scientific bases supported by clinical studies and publications in support of the risk-free considerations they have reported to us.

EMA response
Dear Mr. Donolato
Thanks for your email of 16 July 2018 in which you express concern regarding the quality of several European vaccines.
In response to your concern that some vaccines are contaminated with cellular or viral DNA, please note that as with all biological medicines, vaccines may contain residual amounts of DNA fragments that originate from the process used for their production and that are not considered. contaminants but residual substances.
Any residual substance resulting from production is carefully evaluated by regulators during the review of marketing authorizations and reduced to acceptable levels.
EMA takes its role very seriously in protecting public health. As with any medicinal product authorized following a scientific evaluation by Ema, the quality, safety and efficacy of the vaccines is carefully evaluated in accordance with the legislative requirements before the marketing authorization is issued.
In addition, EMA monitors all medicines already on the market, as well as for the quality, safety and efficacy of all vaccines that are constantly monitored after authorization.
With reference to Priorix Tetra, Vivotif, and Measles Live Vaccine BP, these are vaccines with marketing authorization in member countries through national authorization procedure and not via EMA.
If you wish to obtain further information on nationally authorized vaccines you should contact the national competent authority in the state of your interest. The contacts of the national authorities are available here http://www.ema.europa.eu/ema/index.jsp?curl=pages/medicines/general/general_content_000155.jsp&murl=menus/partners_and_networks/partners_and_networks.jsp&mid=WC0b01ac0580036d63 .

It should be noted that the European Pharmacopoeia describes the official quality standards that manufacturers must respect for the raw materials used in the production of medicines.
In particular, chapter 5.2.3 on cell substrates in the production of vaccines for human use, contains information on the type of cell lines to be used and their technical and specific characteristics.
According to chapter 5.2.3 an acceptable upper limit for foreign cell DNA residues (which is product-specific and depends on many factors, including the nature of the cell substrate / product and the characteristics of the production process, etc.), must be established only when the production process uses certain cell lines with unlimited multiplication capacity in vitro (e.g. continuous cell lines).
As established in the same chapter "for vaccines produced in continuous cell lines, whether tumorigenic or not, risk assessment and risk mitigation must be done to assess the quality of the cell substrate, to define the acceptable criteria for the residues of Foreign cellular DNA in the final product, and to evaluate the presence of cellular proteins ".
Based on the published information, Priorix Tetra contains virus strains produced separately in chicken embryo cells (mumps and measles) or MRC-5 human diploid cells (rubella and chicken pox).
The lines used for Priorix Tetra include human diploid cells that cannot divide indefinitely (non-continuous).
It should be noted that for the European Pharmacopoeia the MRC-5 are recognized as non-tumorigenic, as demonstrated by decades of use and controls, therefore an upper limit does not apply to them.
We also invite you to see the WHO document "Recommendations for the evaluation of animal cell cultures as substrates for the manufacture of biological medicinal products and for the characterization of cell banks (2013)" which provides an extensive clarification on the risks associated with the various types of cells. used in the production of vaccines, and once again confirms that diploid cell lines have been used successfully for many years in the production of viral vaccines and cellular DNA residues derived from these cells were not (and are not) considered to carry any risk significant (link: http://www.who.int/biologicals/vaccines/TRS_978_Annex_3.pdf?ua=1 )

With regard to the fact that genetic variants affect safety and efficacy, it should be noted that modifications in the genomic sequence of a virus do not necessarily have an impact on the antigenic determinants necessary to stimulate the desired immune response in humans. Similarly, maintenance of the mitigation of the viruses contained in these vaccines will be verified during the review of the marketing authorization process.
All vaccines authorized in the EU are tested a priori for release of the batch by the holder of the release authorization using approved methods that have proven to be adequate in determining the potency (i.e. biological activity) of all the substances contained.
In addition, all vaccines approved by EMA and many of those approved nationally, need to be tested before release of the batch, by an official medicine control laboratory, to allow the company to market the batch in a specific territory.
For more info https://www.edqm.eu/en/batch-release-human-biologicals-vaccines-blood-and-plasma-derivatives .

In reference to Infanrix Hexa, which is authorized by EMA, it is a vaccine that contains three inactivated polioviruses in addition to other antigens.
The release test for this vaccine is done in line with WHO and European Pharmacopoeia provisions, which include testing the biological activity of polio.
This is done by measuring D antigen (polio D antigen stimulates neutralizing antibodies).
Polio is an RNA virus and, as per scientific evaluation, (link http://www.ema.europa.eu/docs/en_GB/document_library/EPAR_-_Scientific_Discussion/human/000296/WC500032501.pdf ), foreign cell DNA is virtually eliminated during the purification process. In this case the foreign cells are VERO cells, a continuous cell line isolated from monkey epithelial cells. It follows that DNA does not contribute to the effect of this vaccine, but all the antigens necessary for its effect are actually present. "

Corvelva considerations
First of all, we are not surprised by the reference to Aifa, but we believe that the European regulatory body still has a role that cannot be "glissed" simply by downloading the responsibilities onto the national one. In short, the question should be of interest to them anyway, and they could ask a question to AIFA too, on closer inspection ... if they wanted to.

Secondly, we remain at least perplexed about the lack of regulation regarding the quantity of DNA present in the vaccines: the guidelines (made by them) may also have established that these cell lines do not need quantitative limits, but the thing is per se self disconcerting as there are no (and they do not indicate) publications and studies of the harmlessness of these "residues" (in the face of the residues, we would like to emphasize, it is human fetal DNA from a whole genome and not negligible fractions !! !), although in our first communication we had already raised the problem by writing "as no data are available in the literature, nor have been provided by the EMA, on the absence of danger associated with exposure to this type of contamination", Ema also here it does not report concrete answers supported by publications, it does not mention any study but only regulations. Well where do these regulations come from? This is the question to which we expect an answer! These EMA claims are not supported by any scientific study on the safety of diploid cell lines, nor by specific publications (i.e. clinical safety studies among unvaccinated and vaccinated populations with vaccines produced with these cell lines). Therefore, according to the shared scientific method, appropriate studies are lacking which justify not establishing a maximum tolerance threshold for these types of impurities.

As regards the conclusions regarding Infanrix hexa regarding poliovirus, the presence of D-antigen is already being verified, we await the results to establish whether or not the vaccines are compliant from this point of view. However, the analyzes carried out showed the absence (i.e. the non-detectability with the instrumental method used) of the poliomyelitis viruses. This absence, on the basis of what is reported in the technical data sheet and in the scientific evaluation made by the EMA, cannot be justified, since reference is always made to the presence of viral antigens as agents responsible for the immune response.

In general, this response is not in our opinion sufficient and indeed is lacking in scientific evidence, and in fact bounces our request regarding the checks to be carried out and considerations regarding the reliability and safety of the vaccines analyzed.

However, the association is about to file a complaint, since regulatory bodies seem to ignore the many problems raised.