Open letter to the Institutions regarding the Corvelva analyzes 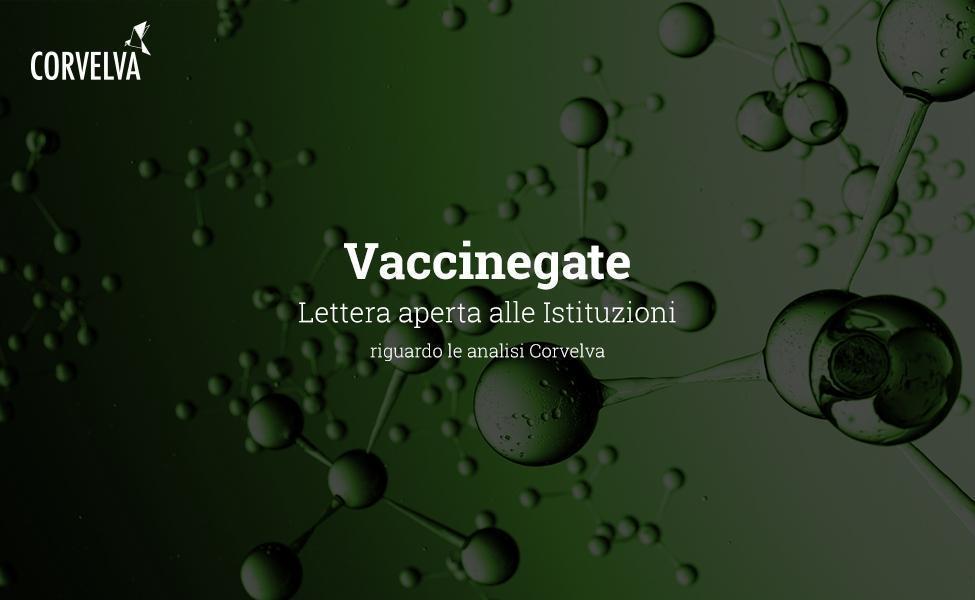 The Corvelva association, based in Veneto, which since 1993 has been fighting for freedom of choice in the therapeutic field, wishes to sound an alarm and ask for the help of all those who will be able to give it, for interpretation and evaluation of the data that emerged from the metagenomic and chemical analyzes that we have commissioned from independent laboratories in Italy.

We point out that the first analyzes, the metagenomic ones, have already been the subject of a complaint to the Public Prosecutor's Office of Rome last August, exhibited filed together with the original certified analyzes of the laboratory and this will also happen for these analyzes.
Having said that, we get to the heart of the matter: both from the first metagenomic analyzes (verification of the content of biological contaminants), and from the chemical analyzes carried out in the last few days, data emerge in our opinion worthy of further investigation.

While we deliver the metagenomic data, accompanied by a scientific publication that validates the method, therefore the reproducibility of the analysis, to the insights that our scientific community will want to dedicate to you (at the same time that we continue in the investigation work, however much in our strength), instead we are asking for help in the interpretation of the data that emerged from the chemicals / proteins. Basically, we commissioned these first "estimates" of the chemical content of the vaccines analyzed, but we did not expect to find so many alarming signs. We invite you to consider that the Priorix Tetra vaccine produced by GlaxoSmithKline, a vaccine in use on the Italian territory for the primary immunization of childhood and adolescence, presented an unexpected and particularly high quantity of the chemical signals found: 115 in the first batch and 173 in the second. Of these, only a quantity ranging from 29% to 43% are known compounds, that is, available in the databases available with the inclusion of the "brute formula". We therefore have an amount that varies from 57 to 71% of compounds present but not identifiable.

We have investigated a potential risk, and ask for an in-depth study by the "technicians" of the result that emerged and the potential risk it represents.

What we would like to make right now with our requests is a serious and detailed dialogue with the presentation of objective data.

From our data it emerges that:

• Peptide fragments associated with proteins potentially coming from the purification process were detected in both product batches, including Sarcoplasmic calcium-binding protein, Actin and Vimentina. Sarcoplasmic calcium-binding protein is a recognized allergen. In our opinion, determining the quantity of these proteins is important since the greater the quantity, the more likely it is that there will be sensitization with the vaccination calls. We ask for your opinion on this.
• Although the analysis, being preliminary, cannot identify the compound in a certain way at this stage, nevertheless it indicates a probable corresponding one. Considering this first raw data, there would be traces of metabolites, amino acids, chemical compounds (such as herbicides, active ingredients of known drugs, such as antibiotics, others that are experimental), alkaloids, etc., many of which are toxic. Your help in interpreting this result in terms of reliability and safety, and any proposals for the verification and / or consolidation of the data would be invaluable.
• Both batches contain traces that are quantifiable between nanograms and micrograms as an indicative order of magnitude. This data is important because some compounds are highly toxic, others are known allergens and still others are most likely pharmaceutical molecules such as Sildenafil (Viagra) or Gabapentin (antiepileptic) or Atovaquone (organic compound for the production of an antimalarial drug). .
• Lot 2 contains traces that are probably associated with AMD-070, an anti-HIV drug and Fluchloralin, a herbicide from the fluorinated family, already considered to be toxic in extremely minimal quantities.

We reiterate the substantial percentage of signals detected but not known, which cannot be identified through the consulted databases. In this regard, we ask if in your opinion there is the will and the possibility of investigating the identification of the same.

Our Association, made up of ordinary citizens, has only accepted the appeal of the Commission of Inquiry "Depleted Uranium" by financing scientific studies aimed at clarifying the content of pharmaceutical products which by law must be administered to our children. We have been operating in the Veneto Region for 25 years, 10 of which in total vaccination freedom but also in dialogue with medicine, all things now definitively lost.

We enclose chemical analyzes (which are in particular the subject of this request) and the metagenomic analyzes carried out to date. For our part, we are continuing our investigations as far as possible. It seemed right to us to make you aware of the results and we look forward to any comments, criticisms or discussions on the matter.

We thank for the attention