Technical reply to the criticism of the Hon. Marco Bella 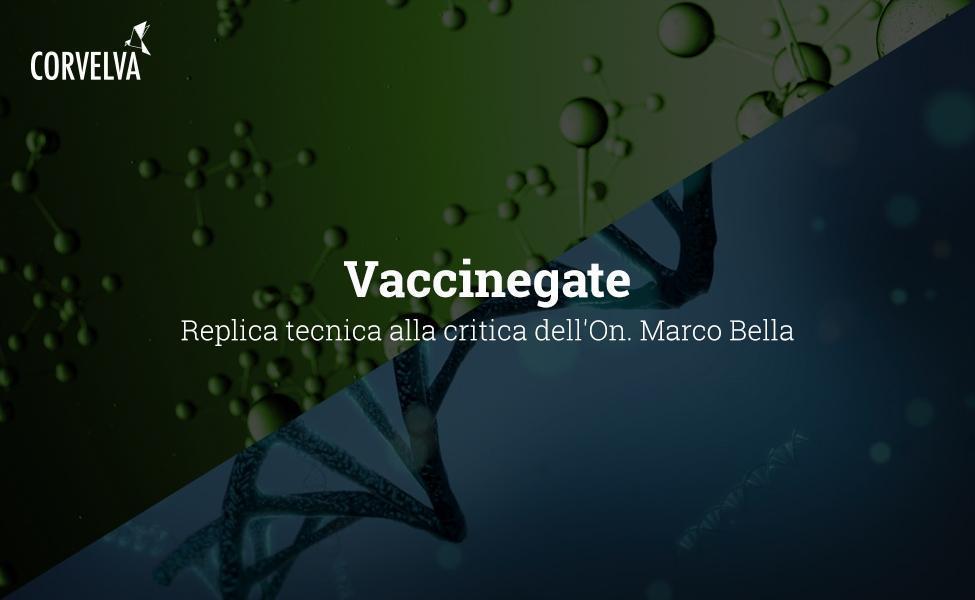 The problem is the method, are the analyzes, is it Corvelva or are there other interests?

As a premise to the purely technical response to the article of the Deputy Bella, appeared on Daily fact, the Corvelva Association must emphasize that the spokesman for the 5 Star Movement has received, like all the Parliamentarians of the Republic, several emails with the attached analyzes. It is therefore easily ascertainable by anyone and all the more, given his interest, by Prof. Bella, that our association has never proposed these results as conclusive and indeed, on several occasions it has been stressed that this is a first level analysis , which, however, already raised numerous problems and that precisely in light of this we decided to bring these findings to the attention of all the parties involved: to make the institutions, citizens, politics aware of the possible and concrete risk to health that lay ahead. Above all, we have never brought absolute truths, indeed, we were and we are full of doubts and we have always asked for dialogue, on a theme that has by now seen exacerbating the spirits and positions.

We regret to see how MP Bella preferred to respond to newspapers rather than worried parents who had already informed him of the critical issues that had emerged in recent months; instead it impresses us to see how a Professor of chemistry, now lent to politics, makes gross mistakes in criticizing a method that he has NOT seen and evidently does NOT know. Now, faced with this behavior in stark contrast to what his party, the 5 Star Movement, has always said, the question we ask ourselves is the following: on behalf of who speaks Bella? Is it the deputy Bella who stands in judgment without having the preconditions, or is the 5 Star Movement all to have some coherence problem? On the one hand, deputies whom we gladly call Honorable Members, such as Sara Cunial, make themselves available to the citizen and are the spokesman for the requests of a part of civil society, in continuity with the modus operandi with which the Movement has always been cloaked; on the other, his colleagues like Bella mock and attack a series of data in a pretext, without stopping to think about the strength that drives us as parents to go ahead, pay for the latest generation methods, to bring light on a matter that interests us. all, and which above all affects the health of Italian children undergoing vaccine prophylaxis.
Well, it is clear that Prof. Bella has reasons that remain unknown to us, but that apparently does not concern dialogue and civil confrontation nor love for science, to launch the attack blindly and even a little coarsely ; indeed it seems to be guided by personal preconceptions.

Deputy Bella, why do you defend something you obviously don't know?

We are writing to respond to your recent comments. In particular, we would like to deepen and detail the technical observations highlighted by her. We report, therefore, below the text of his speech by replying by points:

"From what can be deduced from the so-called" technical attachment ", these analyzes do not prove in any way the presence of the substances indicated. First of all, mass spectrometry alone allows to identify only what is the "molecular weight" of a given chemical (eg: 145 daltons). There are many combinations of atoms that give exactly the same molecular weight (isomers). Anyone who has followed a basic course in organic chemistry in high school knows that the isomers, despite having the same elemental composition, are compounds with completely different chemical, physical and biological properties. For example, the possible isomers of a hydrocarbon with 30 carbon atoms are a few billion, all with the exact same molecular weight "

The fact that CORVELVA has limited itself to carrying out the investigative screening phase for the time being has always been stated. We will provide the certain identity of the compounds as soon as we have carried out the confirmation tests, as required by the procedures used routinely.

"Furthermore, during the analysis by mass spectrometry, the molecules fragment, generating artifacts, so it is probable that the signals that are seen are not even due to molecules actually present"

This claim is incorrect. Mass spectrometry is made up of a family of technologies that vary mainly according to the following factors:

The analyzes we carried out were performed using the ionization source called Surface Activated Chemical Ionization (SACI). It is known in the literature to be a soft ionization technology that, operating at low voltages and under polarization conditions of the solvent, does not produce fragmentation (Cristoni S, Rubini S, Bernardi LR. Development and applications of surface-activated chemical ionization Mass Spectrom Rev. 2007 Sep-Oct; 26 (5): 645-56).

"Finally, mass spectrometry alone does not allow you to measure the quantity of individual substances, let alone a mixture"

“There are databases in which some substances known by molecular weight have been ordered. There are no mass spectra in the technical annex. There is simply a table: of allegedly identified substances, obtained by selecting them arbitrarily from the database and with the description in Italian (obtained in several cases probably via google and with numerous errors, for example by clearly confusing two classes of compounds, amides and amines , see figure) "

The word alkylamide is a clear errata error potentially occurred by the spelling checker during the transcription of the report. The fact that it is an amine is clearly contained in the compound name given as a POTENTIAL candidate (3-Buten-1-amine). In any case, the POTENTIAL identification is given by the name of the compound and certainly not by the family it belongs to. However, thanks for reporting this small "minor revision" which we will correct promptly.

"In this case, a single parameter, the molecular weight, was arbitrarily selected and it was claimed that this single parameter would lead to a" probable "identification. It would be like saying that someone 170 cm tall was present in a room and on the basis of this alone a person who lives in China, one who lives in India and the unpleasant neighbor was identified, just because all three are 170 tall cm "

It was omitted to specify the fact that mass spectrometry measurements were performed in accurate mass. This means that the m / z ratio is acquired by monitoring three decimal places. It follows from the fact that, while it is true that there are many ions that can have an m / z ratio of 140, there are far fewer that have an m / z ratio of 140.123 with an error range of about 5 ppm. This capability of the spectrometers, having an analyzer capable of acquiring the accurate mass of molecular ions, makes them suitable for obtaining the potential identification of complex mixtures. In fact, these technologies are widely used to screen the complexity of biological fluids for the purpose of researching metabolic and protein tumor markers (Zhou W1, Petricoin EF 3rd2, Longo C2,3. Mass Spectrometry-Based Biomarker Discovery. Methods Mol Biol. 2017 ; 1606: 297-311; Stoop MP1, Coulier L, Rosenling T, Shi S, Smolinska AM, Buydens L, Ampt K, Stingl C, Dane A, Muilwijk B, Luitwieler RL, Sillevis Smitt PA, Hintzen RQ, Bischoff R, Wijmenga SS, Hankemeier T, van Gool AJ, Luider TM. Quantitative proteomics and metabolomics analysis of normal human cerebrospinal fluid samples. Mol Cell Proteomics. 2010 Sep; 9 (9): 2063-75.).

"Finally, if we had the suspicion of the presence of herbicide contamination in vaccines, the correct behavior would be to publish the analysis data in any form (in this case the mass spectra) so everyone could verify them not go to do sensationalist press conferences around ”

As always claimed, the tests performed are to be considered first level screening. As soon as the confirmation tests have been carried out, performed on the candidate compounds of greatest interest, the data will be published in peer review journals.

* Doctor in chemistry and pharmaceutical technologies, with a doctorate in pharmaceutical sciences from Harvard medical school Boston. She worked in the pharmaceutical industry sector where she dealt with the registration and development of research projects in the oncology field. Consultant part of law 210/92, environmental pollution and occupational diseases, participated in the last parliamentary commission of inquiry on depleted uranium in the vaccine group. Current consultant for the National Order of Biologists for the toxicology of drugs and vaccines, he also deals with nutrition and complementary therapies.